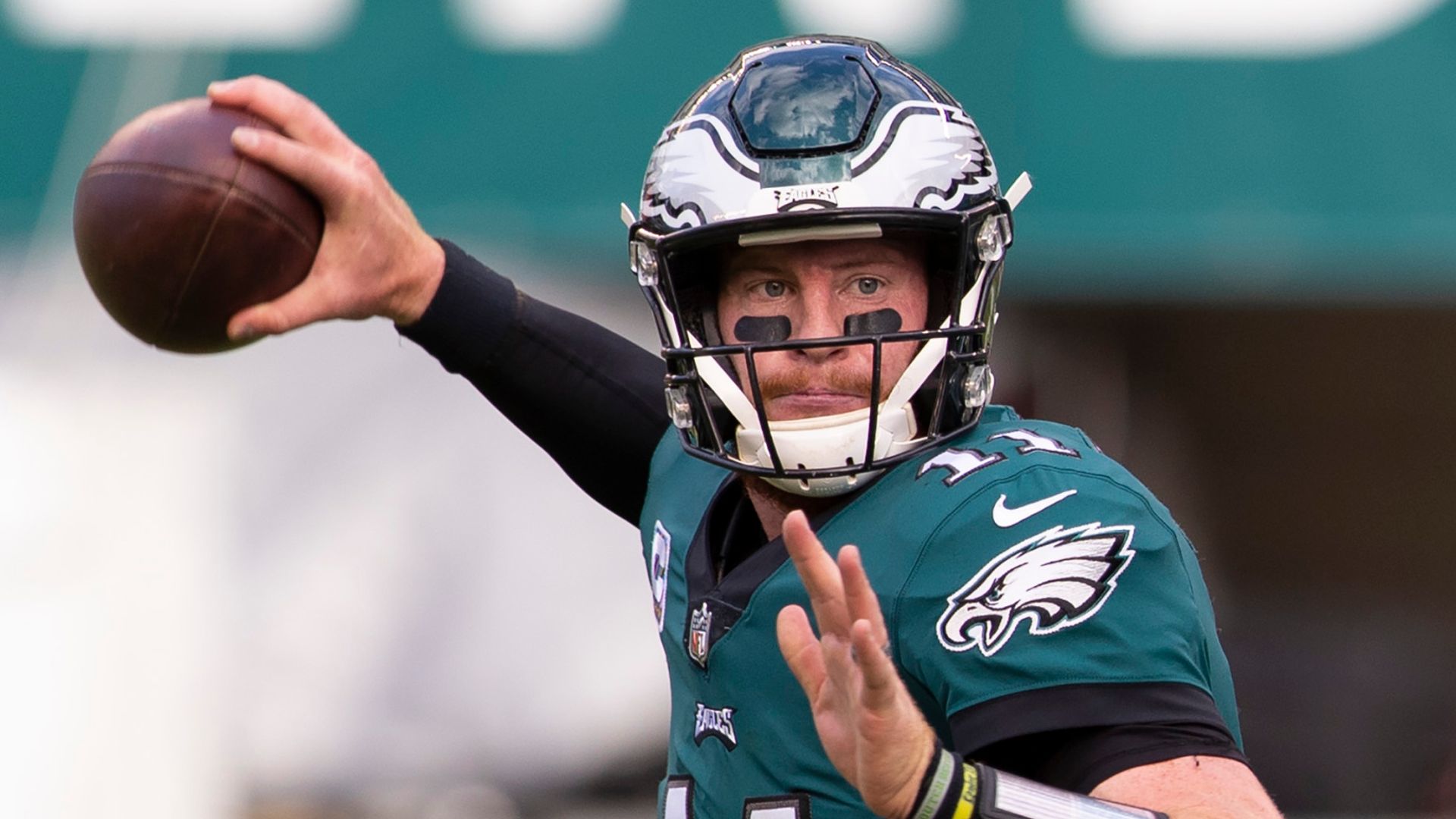 Watch Giants @ Eagles live on Sky Sports NFL from 1:20am in the early hours of Friday morning

Six teams in the NFL currently have as many wins as the NFC East’s four sides have combined at 5-18-1.

It’s historically bad, with the Dallas Cowboys representing the first team to top a division with a losing record after Week Six since the 1970 merger.

Dallas’ defense is in tatters, the Eagles have been destroyed by injuries once again, the Giants’ 30th ranked passing offense have a joint-worst three receiving touchdowns and Washington, who might be on the quarterback hunt once more, are ranked 32nd in rushing offense.

Rather than being the NFL’s non-entity, though, the situation in the NFC East again raises questions surrounding the league’s playoff setup. The winner of the worst division in football is guaranteed a home playoff game, likely against a team with a far better record. It doesn’t seem all that fair, but that’s probably a conversation for a later date.

“How ‘Bout Them Cowboys!”

It all looked so promising in the offseason, didn’t it? But mediocrity has clung to Dallas in 2020, a first-place lead absent of evidence pointing to a deep playoff run combining with last year’s inexcusable failure to hold on to top spot in the division.

Monday night’s 38-10 throttling at the hands of the Arizona Cardinals means the Cowboys lead the mess with a 2-4 record through the opening six weeks.

Injury to Dak Prescott looks like it could be defining, and a collapse in production on offense is no surprise. But on a positive note for the quarterback, the loss of his record-threatening passing statistics might convince the organisation to meet his wishes when contract negotiations resume at the end of the season. Of course, that’s assuming Dak wants to stick around.

The Cowboys have bigger issues than under center. Turnovers being one of those, with Dallas having given up a league-high 15 so far, including six interceptions and nine fumbles. Of those nine fumbles, Ezekiel Elliott has been guilty of five, two of which came against the Cardinals and both resulted in touchdowns on the ensuing drives.

The flip side to that is an abysmal Cowboys defense, ranked 27th overall and 32nd in scoring, allowing a league-most 84 points from turnovers this year. Defensive coordinator Mike Nolan appears to be walking on thin ice.

Season-ending injuries to offensive tackles Tyron Smith and La’el Collins and the recent absence of center Joe Looney makes for a decimated offensive line, while tight end Blake Jarwin is also out for the remainder of the campaign. Linebacker Sean Lee is still nursing a sports hernia and Leighton Vander Esch has only just returned from injured reserve.

The very capable Andy Dalton is perhaps the least of the Cowboys’ worries at the moment. He just isn’t deemed ‘fashionable’, which is why confidence in the presence of a reliable veteran might prove slow coming.

The best team in the division?

The Eagles might just well be. But who could know for sure? Head coach Doug Pederson once again finds himself pulling guys off the street in order to field a team.

Last season’s NFC East champions ended Sunday’s 30-28 defeat to the Baltimore Ravens with just two healthy starters left on offense in quarterback Carson Wentz and center Jason Kelce. Tight end Zach Ertz is set to be out for up to a month after suffering an ankle injury in the game, while running back Miles Sanders could miss a couple of weeks with a knee problem.

Despite their defeat , they put up 22 points in the fourth quarter on Sunday and were a successful two-point conversion away from potentially taking the Ravens to overtime.

“This is where veteran players who have been through it, and as recently as the last couple of seasons with us, know how to deal with it, know how to handle it and know how to pull these guys along,” Pederson said on Monday.

Much like the Cowboys, turnovers are an issue. The Eagles are joint-second in the league with 12, Wentz’s nine interceptions and league-worst completion percentage illustrating his difficult start to the year. But between their no-quit quarterback (who was sacked six times and hit 16 times on Sunday), the ability of Sanders and Travis Fulgham’s emergence, the depleted Eagles continue to warrant respect.

“I’m watching Carson Wentz play heroically, but still lose,” said Good Morning Football’s Nate Burleson. “But there’s something about the way the Eagles are coached, about the way they play.

“I like the way the Eagles play and if they win this one, and win it convincingly, it could be the win that propels them in the NFC East race.”

It’s probably best not to shout about it too loudly, though. Joe Judge chalked up his first win as head coach on Sunday as the Giants ousted Washington in a game they probably could and probably should have won more comfortably. Should, could, probably has been the story throughout this Giants rebuild.

They should have beaten the Cowboys in Week Five but blew a 14-point lead and were punished by a last-second game-winning field goal.

One might argue the Cowboys’ struggles under Mike McCarthy suggest Jason Garrett wasn’t the problem in the latter stages of his time in Dallas, but his offense in East Rutherford has been painfully uninspiring through the first six games.

Granted, he and the Giants have had to deal with crushing injuries to running back Saquon Barkley and wide receiver Sterling Shepard, but the play-calling has fallen desperately short of the creativity that was expected.

The Giants rank 31st in both total and scoring offense this year. Alongside the dime here and there, Daniel Jones is making bad decisions and still struggling at times to get past his first read, while Garrett has appeared reluctant to let him attack downfield or utilise his rushing threat on a regular basis.

The offensive line in front of him is yet to convince, Evan Engram and Golden Tate have been concerning non-factors and the Giants just can’t run the ball.

General manager Dave Gettleman will be grasping at any positive he can find, with his tenure in a far more vulnerable place than that of Judge in his first year. The success of free agency signing James Bradberry at cornerback leads the way, followed closely by linebacker Blake Martinez, who has been a tackling machine since his arrival in the offseason.

The Giants are actually ranked a respectable 12th in total defense, but, as proven, Patrick Graham’s unit can only carry their offense for so long.

Somehow, they remain in the hunt despite their 1-5 record.

“One of these teams is going to get an actual bonafide win in the NFL – which, in that division, equals about three wins in the NFC West,” added GMB’s Kyle Brandt ahead of the Giants’ clash with the Eagles.

“What is the threshold in this division we’re willing to accept for the fewest amount of wins? Is it six? Because I think it might be five. I think Joe Judge and the Giants could win the division at 5-11.”

We have a new contender

A contender in the running for Trevor Lawrence, that is. If not Clemson’s exceptional No 1 overall pick in-waiting, then perhaps North Dakota State’s Trey Lance or Ohio State’s Justin Fields.

Washington can’t move forward until they find some stability at quarterback. Ron Rivera is out on Dwayne Haskins, Kyle Allen isn’t a long-term solution and nobody quite knows what Alex Smith might be capable of amid his astonishing comeback.

Haskins’ move from starter to third-string meanwhile raises the question as to whether the next general manager of the Giants will be a Daniel Jones supporter. Nothing is a given in the NFL these days.

Allen had some nice moments against the Giants and his mobility was a plus, but his two turnovers both led to decisive touchdowns, including Tae Crowder’s decisive fumble return.

It’s hard to decipher positives from a defeat to a sloppy Giants team, but Washington’s defense held New York to zero points on offense in the second half. In truth, that doesn’t exactly reflect well on their own offense, either.

In Chase Young they have a potentially dominant defensive staple to build around, Terry McLaurin a legitimate number one wide receiver and Rivera may be the perfect head coach to navigate the franchise’s recovery. But right now, the team is lacking both direction and identity.

The good news for all four teams? They are in the NFC East, where anybody can win it. Seriously, anybody. It’s ugly and erratic, but it’s impossible to ignore.

Watch Giants @ Eagles live on Sky Sports NFL from 1:20am in the early hours of Friday morning.