Floyd Mayweather doesn’t expect Gervonta Davis to need to step on the scale more than once October 30 in San Antonio.

Davis’ promoter and mentor revealed Wednesday night during a media workout at Mayweather’s gym in Las Vegas that Davis already is “under 134 pounds.” The 25-year-old Davis’ regular struggles making weight has been a predominant theme throughout the promotion of his Showtime Pay-Per-View fight against Leo Santa Cruz, but meeting the contracted limit of 130 pounds won’t be an issue next week, according to Mayweather.

“I’m just so happy with Tank,” Mayweather said during an event that was streamed live on Showtime Sports’ YouTube channel. “Right now, [he’s] one of the biggest fighters in the sport of boxing. No matter where we go, he’s, you know, I’ve laid the blueprint on what to do and I played a major part, and I’m supposed to play a major part in helping him grow, as far as growth. But as far as in the ring, what we’ve been talking about these last 12 weeks, what’s very important is basically making the weight.

“Your weight should be made a lot earlier. So, he decided to come to Las Vegas to do a 12-week training camp. And so far, everything has went great. He’s been able to focus, work extremely hard, he got different looks, as far as sparring, boxing, he got different looks. And the main thing is, right now, he’s under 134 pounds, which is great. So, I think we have like a week and something to go – I don’t know how many days, exactly – but I’m proud of him.” 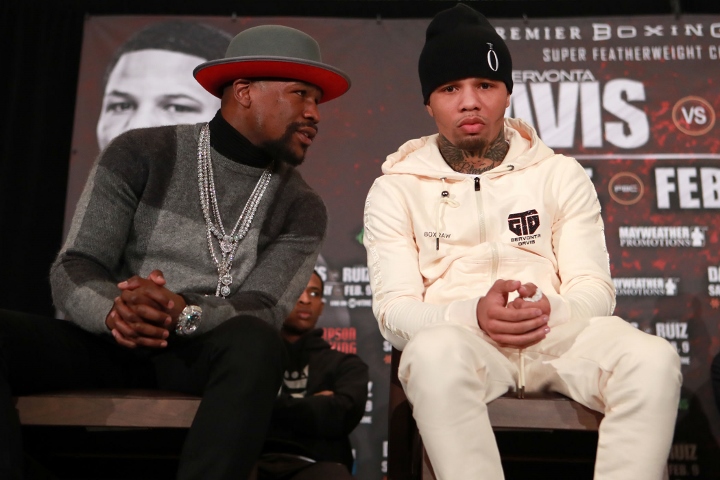 Davis (23-0, 22 KOs) trained for his last fight in his hometown of Baltimore, where Davis told BoxingScene.com recently that distractions partially caused him to miss weight on his first try for his lightweight title fight against Yuriorkis Gamboa. The left-handed knockout artist was 1¼ pounds overweight when he initially got on the Georgia Athletic & Entertainment Commission’s scale, but he eventually came back and officially weighed 134½ pounds for their fight at the 135-pound limit.

The heavily favored Davis dropped Gamboa three times, once apiece in the second, eighth and 12th rounds, and stopped Cuba’s Gamboa (30-3, 18 KOs) in the final round of their fight for the then-vacant WBA world lightweight title December 28 at State Farm Arena in Atlanta. Two years earlier, the IBF stripped Davis of its junior lightweight title because he was two pounds overweight for his 12-round, 130-pound championship defense against Francisco Fonseca.

Davis knocked out Costa Rica’s Fonseca (27-3-2, 21 KOs) in the eighth round of their fight on the Mayweather-Conor McGregor undercard in August 2017 at T-Mobile Arena in Las Vegas.

The 32-year-old Santa Cruz (37-1-1, 19 KOs), of Rosemead, California, will make the first defense of the WBA “super” 130-pound championship against Davis a week from Saturday night at Alamodome. Davis vacated that title last year to move up to lightweight to battle Gamboa.

Santa Cruz and Davis also will fight for Davis’ WBA world 135-pound title, despite that they cannot weigh in above the junior lightweight limit of 130.