Former two division champion David Haye is rolling his eyes at some of statements coming from observers who believe Alexander Povetkin knocked out Dillian Whyte with a “lucky punch.”

Back in August, Povetkin scored a brutal one-punch knockout of Whyte in the fifth round to capture the WBC interim-title.

Povetkin had been down twice in the fourth round, but he came back in the fifth with a single uppercut to put Whyte down and out. 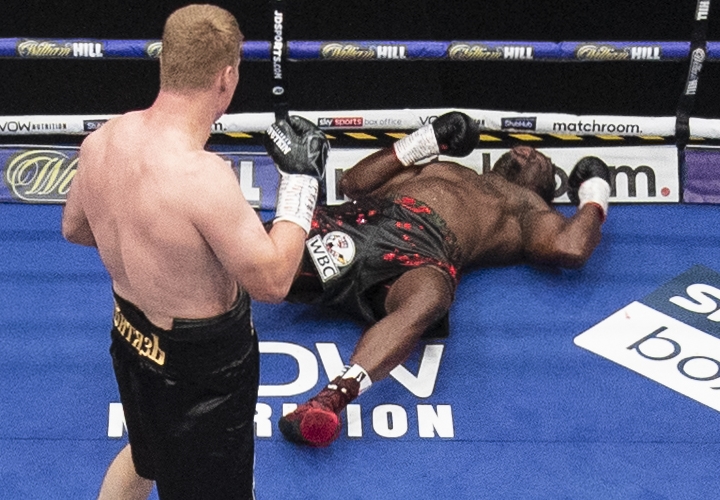 Haye, who manages heavyweight contender Derek Chisora, says his boxer was hit with the same vicious uppercut during sparring sessions.

“It’s a very dangerous fight and it’s a fight that I think Dillian doesn’t want to accept it was nothing other than a lucky punch. He thought, ‘I was winning the fight’, which he was, ‘I had him knocked down twice in the fourth round and I was winning the fifth round until I got hit by one shot and that was it’. Anything can happen in boxing, it happens in the heavyweight division,” Haye told Sky Sports.

“I don’t think that’s the mindset you need. You can’t say, ‘You won because it was an anomaly’. That left uppercut that he threw knocked out Carlos Takam, in a very even fight, in a very good toe-to-toe fight. It’s a shot that he throws regularly. Derek was telling me when he sparred with him, he was getting hit with that shot, so it’s one of his shots, and to get hit with someone’s best shot isn’t very lucky is it.

“The guy has got a big shot. It’s like getting caught with Dillian Whyte’s left hook. You know it’s there if you can practise to go under it, if you throw your right hook to the body or not, or you can stand up and get knocked out.”

Whyte exercised an immediate rematch clause, with a second fight with Povetkin taking place on November 21.