Last year, Anthony Joshua shockingly lost to Andy Ruiz via stoppage in June, but Hearn and company enforced their rematch clause for Joshua to regain his titles during his December rematch in a one-sided unanimous decision win versus Ruiz.

On the other side of the heavyweight picture, Tyson Fury defeated Deontay Wilder in his rematch in February. A third fight between Fury and Wilder has been delayed due to coronavirus several times ever since. Now, Fury and promoter Bob Arum are proclaiming that their contract for the trilogy has expired and they are moving on from Wilder altogether, hinting that Fury will take a stay-busy fight Dec. 5 in the U.K. 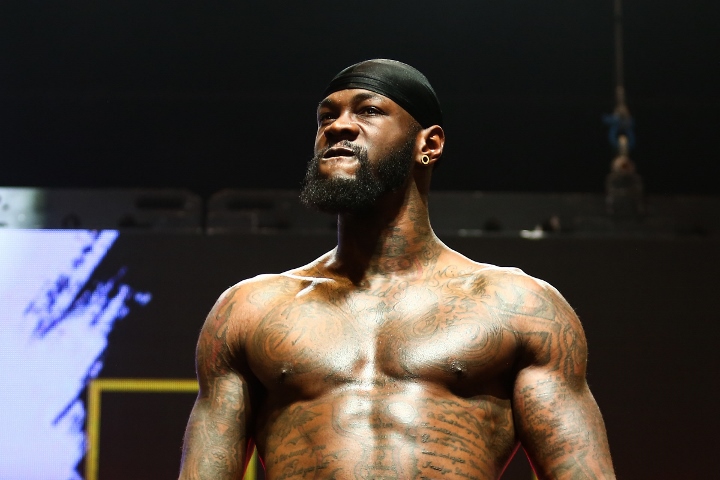 Hearn is very much an interested player in the big picture. Joshua will fight the Arum-promoted Kubrat Pulev on Dec. 12, and should Joshua and Fury both come away victorious, all paths will become clear for the previously agreed upon Fury and Joshua encounter in 2021 for the unified and undisputed heavyweight crown.

Although Fury moving on from Wilder is a positive development for Hearn’s business, the promoter is still perplexed and bewildered from the recent proceedings.

“Deontay Wilder has just vanished from the earth and just doesn’t fancy fighting anymore, or his advisers have done the worst contract in boxing history,” Hearn told IFL TV. “It just expired. We’re in a global pandemic. You’re telling me that you’ve done a contract that doesn’t protect yourself against force majeure, and you no longer have a rematch clause because it just expired? I don’t believe [Wilder manager] Shelly Finkel would have done that, but Arum and those guys are goading them, saying, ‘Goodbye, it’s expired.’ And Shelly is coming out, going, ‘I hope we can do the fight.’ Why aren’t you coming out to protect your rights? Say, ‘No, you signed the rematch, here’s the contract. We’re having it. We’ll still take it.’

Hearn said Wilder’s loss was similar to Joshua’s because both were defeated in humiliating fashion.

“When Anthony Joshua lost to Andy Ruiz, there wasn’t one day that would pass without him thinking about avenging that defeat. When Dillian Whyte got knocked out [versus Alexander Povetkin]… as soon as he got out of that ring, he said, ‘I want that rematch’ … They want to come back. They won’t rest until they get revenge or at least attempt revenge. I just can’t understand. And what’s with the silence [from Wilder]?”

Hearn said that if Wilder had beaten Fury in February, he wasn’t confident that a fight could be made between Wilder and Joshua.

“How can you let a contract expire and evaporate? Do you know how much pressure I was under when AJ lost to force that contract with Andy Ruiz. I didn’t sleep for weeks because they tried to get out of that rematch. And I would not accept it. I fought tooth and nail. [Joshua] wanted that fight more than anything,” said Hearn.

“If I had turned around and said, ‘The only way you can get that fight is if you fight for nothing,’ [Joshua] would have done it. I know people say that there’s no gate [for Fury-Wilder III]. Alright, so there’s no gate. Do you want the rematch? Do you want to win your belt back or do you want to let it expire and never fight him [Fury] again? [Wilder] can’t be taken seriously again if he comes back and has a 10-rounder. None of this makes sense. I’m worried about our business, but I’m fascinated to see how this plays out.”