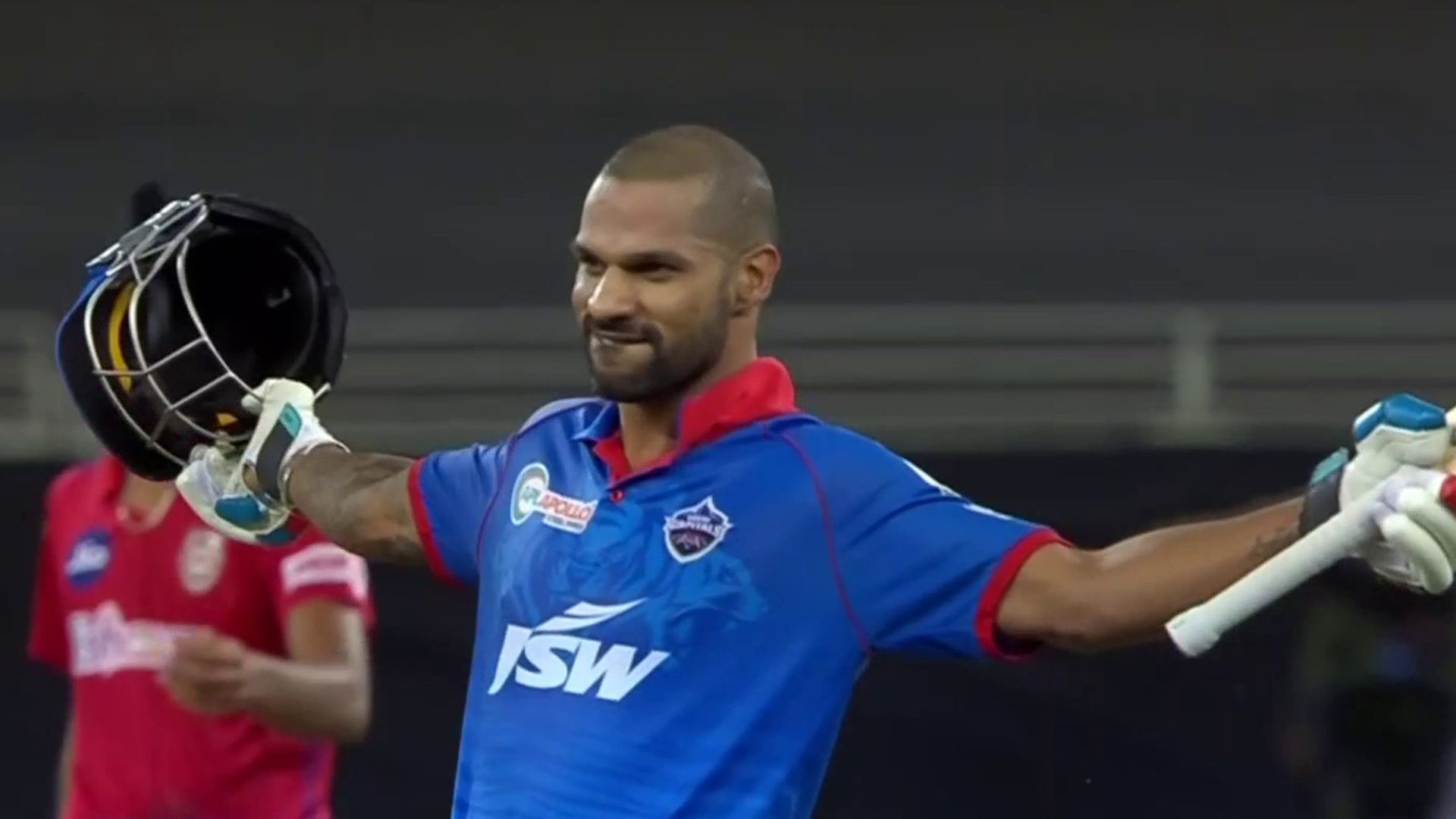 Shikhar Dhawan became the first player to score back-to-back IPL hundreds but it came in a losing cause as IPL leaders Delhi Capitals were beaten by a resurgent Kings XI Punjab.

The Delhi opener scored his first T20 century in the victory over Chennai Super Kings on Saturday in his 265th innings in the format but No 2 came along just three days later, from just 57 balls, as batted through to take the Capitals to 164-5.

It proved to be insufficient though as Kings XI, spearheaded by Nicholas Pooran’s sparkling 53 from 28 balls, chased it down with an over to spare to complete their third straight victory and keep their hopes of reaching the knockout stages alive.

KXIP have risen to fifth in the IPL table and are now just two points off the play-off positions, Delhi stay top despite just their third defeat of the campaign.

The Capitals won the toss and chose to bat first but Dhawan’s fine knock was in stark contrast to the rest of the Delhi batsman.

Young opener Prithvi Shaw’s early season form has deserted him and he went early, well caught by Glenn Maxwell in Jimmy Neesham’s (1-17) first over for seven, captain Shreyas Iyer (14) also made minimal impact before he was superbly caught down the legside by KL Rahul off Murugan Ashwin (1-33).

Fortunately for Delhi, while those around him were floundering, Dhawan could not have been seeing the ball any better. He raced to 50 from 28 balls and then went to 5,000 runs in the IPL with a perfectly-timed slog-sweep for six off Ravi Bishnoi.

It was a shot he had plenty of joy with throughout the innings and accounted for a number of his 12 boundaries and three sixes, before a cut shot for two off Arshdeep Singh took Dhawan to his history-making second hundred in the 19th over.

The last ball of that over was lashed over long on by Hetmyer but a boundary-less final over from Shami kept Delhi to gettable total.

The tournament’s leading run-scorer, Rahul (15), was dismissed early by Axar Patel but Kings XI’s chase was given a significant boost two overs later as Chris Gayle went after Tushar Deshpande and took the seamer’s over for 26, including three fours and two sixes; the second clubbed brutally, flat over wide long on.

He was gone two balls into the next though, bowled by Ravichandran Ashwin, and when Mayank Agarwal was run out following a terrible mix-up with Pooran later in the over, Delhi had the edge.

Pooran soon made amends though, cutting Ashwin for four before really opening up against Deshpande, pulling a six over square leg before adding a pair of fours and then smashing Stoinis for another big six in the next over.

The West Indian left-hander reached his half-century with perhaps his most unconvincing shot, an edged four down to third man, but was gone next ball as he gloved a well-directed short ball from Kagiso Rabada behind.

By that stage, the required rate was already less than a run a ball for Kings XI and continued to ease towards their target. Maxwell, after a slow start, got a couple of boundaries away but with just 18 required, he gave his wicket away in search of another. He tried to hammer Rabada over the legside, sent a top edge skyward and wicketkeeper Pant took a good catch as the ball spiralled back down.

That gave Delhi a glimmer of hope but Deepak Hooda and Neesham calmly ticked off the runs before the Kiwi finished it with a flourish, smashing Daniels Sams over deep midwicket for six to end the 19th over and the match.

Watch every match of the 2020 IPL live on Sky Sports Cricket. Kolkata Knight Riders vs Royal Challengers Bangalore is Wednesday’s match with coverage from Abu Dhabi beginning at 2.50pm.