He picked Lopez to pull off the upset last Saturday night at the MGM Grand’s Conference Center in Las Vegas.

And pull off the upset he did. 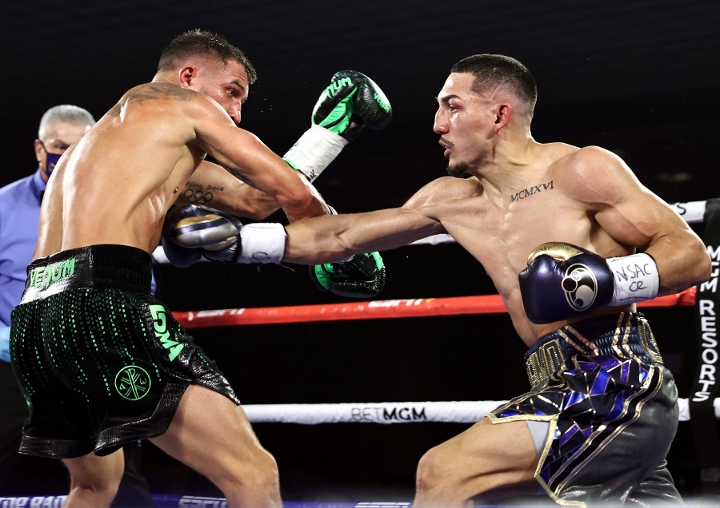 Bradley believes Lomachenko underestimated the speed of Lopez, who the veteran believes may have been the quicker fighter in the ring.

“I knew he had a lot more to his game than just being a puncher, and I said he had exceptional timing, but I really liked the way that he took control of the range and dictated the pace early on — he proved he’s a boss in there,” Bradley told ESPN.

“Lopez came out and fought every minute of every single round. But it wasn’t just Lomachenko making his calculations — he was clearly frustrated with what he was seeing. It was the timing. It was the speed. I don’t think Lomachenko really understood how fast Lopez was. He was actually faster than Loma, as well as longer, stronger and just bigger. Lomachenko just poured on the gas a little bit too late. He started coming on in Round 7, and took control in Round 8. By that time, Lopez had a huge lead going into the championship rounds.”

Lopez, at only 23-years-old, was able to succeed where a lot of other fighters had failed.

There was even a period of time where Lomachenko was making fighters quit on their stool.

“A lot of fighters who have stepped in with Lomachenko were overwhelmed by the way that Lomachenko fought them. Lomachenko figured them out, took them into deep water and then finished them as the rounds went on. Positioning was a key factor in all of those fights, and Lopez didn’t fall for that. He stayed calm and poised and kept popping his jab out there, which isolated the offense of Lomachenko,” Bradley said.

“That last round was the defining moment, I felt, and it was the reason why I felt like Lopez won that fight. Loma had Lopez on his heels at the end, and Loma felt that Lopez was starting to fade, and he did look like that, especially in the 10th and 11th. But Lopez stayed resilient.

“He faced down that championship round, fought past his exhaustion, and he went out and threw 90-plus punches. Lopez showed what he was made of. Lomachenko tested him — tested his spirit, tested his ego, tested his conditioning — tested everything. Both of those guys, in that last round, showed what they’re made of. Lopez just had a little bit more. That was it. It doesn’t take much. If Loma was going five miles an hour, Lopez was going six. That’s all it takes.”

A prime Roy Jones is considering by most experts as one of the most talented boxers of all-time.

“Lopez impressed me. I knew that he was special, but on Saturday he showed everybody that he’s a superstar. There are stars and there are superstars, and superstars typically do things just a little bit different than a typical star to reach that next level. The attributes that Lopez has — how brash he is, how confident he is — add in his timing, his power, all of those things together make him a superstar,” Bradley said.

“He kind of reminds me, with his speed, his timing, his reflexes and quick decisions on the fly, of a young Roy Jones Jr., one of my favorite fighters of all time.”