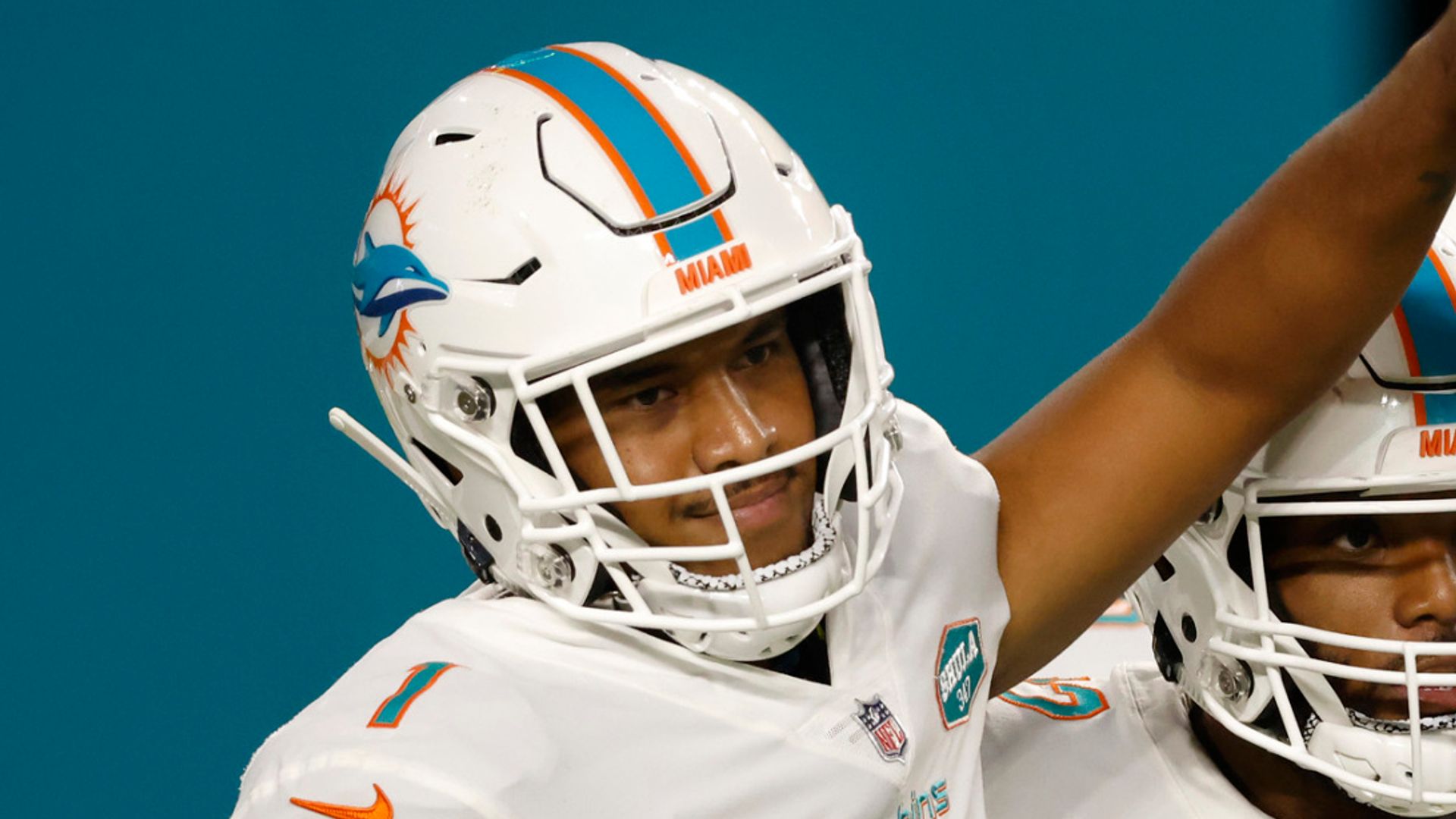 “The most important thing that came out of my conversation with my parents was just that they were happy to see me out there and playing again, especially with what happened last year prior to the injury.”

Following Sunday’s shutout win over the New York Jets, Tua Tagovailoa returned to the field and sat by himself on the 15-yard line as he FaceTimed his parents to reflect on making his NFL bow.

The rookie quarterback, put in for Ryan Fitzpatrick late in the fourth quarter, had not only just made his official Miami Dolphins debut but also his return to competitive action following last November’s season-ending hip injury with Alabama. An injury he suffered on the 15-yard line against Mississippi State.

In two of the most eagerly-awaited snaps of a football in 2020, the No 5 overall pick went two for two with a two-yard pass to Patrick Laird and a seven-yard connection with Jakeem Grant. The smallest contributions of what promises to be an exciting Dolphins career were arguably the most poignant after a gruelling year of both physical and mental recovery.

Tua Tagovailoa went back to the field and he’s sitting around the 15-yard-line in full uniform. It looks like he’s soaking this moment in.

“That’s usually how it goes. I usually talk to my parents after the game and my parents usually never miss my game.”

There is a very real chance the 22-year-old may not feature again until the Dolphins face the dire Jets at the end of November – perhaps not even then.

Head coach Brian Flores has taken understandable caution with exposing his face of the franchise in-waiting to unnecessary punishment, refraining from putting Tagovailoa in as Miami dismantled the San Francisco 49ers in Week Five.

Though a limited experience on Sunday, it was one that will no doubt stay with him.

“22 years of my life and you take five years off of that and that’s how long I’ve been playing this sport so it wasn’t more so butterflies, it was just excitement to get out there and see what plays (offensive coordinator) Chan (Gailey) would give me to run with the offense,” he added. “It was really fun.

“The most important thing that came out of my conversation with my parents was just that they were happy to see me out there and playing again, especially with what happened last year prior to the injury.”

Tagovailoa recalled Fitzpatrick making a joke over the ease of his two-yard opening completion to Laird, with the pair having built a strong bond since the former’s arrival in the offseason.

Fitzpatrick’s widely-touted qualities as a teammate have been evident amid his effort to assist Tagovailoa in his transition to the NFL, Sunday seeing the 37-year-old lifting Miami’s reduced crowd as the rookie took to the field for the first time.

“To just be out there with my teammates, being my first time and getting the support and love from them, I think that was awesome,” said Tagovailoa.

“Then you have a 16-year vet like Fitz who has no animosity towards it as well, who has just been supportive the entire time. Good drive, bad drive he comes to the sideline and talks through his process about why he did some things.

“I’m very fortunate to have a mentor like him who is very encouraging on the field and he’s very personable off the field as well.”

Fitzpatrick finished 18 of 27 passing for 191 yards, three touchdowns and two interceptions, while the Dolphins defense stifled Joe Flacco and the Jets throughout with three sacks and 10 quarterback hits.

On Tua making his debut, the veteran play-caller said: “I think he was happy to be out there, it was nice to get a couple of throws in too. I think that was a cool moment for him.

“Just the reception of the fans that were here and everybody on the sideline. We’re all excited to see him get out there.”

The Dolphins head into the bye week 3-3 before facing the Los Angeles Rams in Week Eight.