Teofimo Lopez shocked the boxing world Saturday night by doing what few people would have thought could be done: Win a decision over one of the best fighters in boxing and the most decorated amateur in the sport.

Was it really shocking though?

Not to Lopez and his team leading up to the fight.

From the opening bell, Lopez stuck to a game-plan that was effective throughout most of the fight, save for the final couple of rounds, when Lomachenko was the aggressor. Lopez utilized a combination of taking angles away from Lomachenko, attacking the body, varying his offense, and utilizing his speed to walk Lomachenko down.

An elated Lopez celebrated in the center of the ring, including his traditional backflip, after the scorecards were read, indicating he was the winner.

Credit Teofimo Lopez, Sr. and former contender Joey Camache of implementing an effective plan for Lopez, Jr. to follow. Gamache once worked as an assistant to Anatoly Lomachenko a few years ago.

Yes, Lomachenko did lose for only the third time in 413 fights, dating back to his days as an amateur. But credit should be given to Lopez not only for beating Lomachenko but for wanting to fight him. 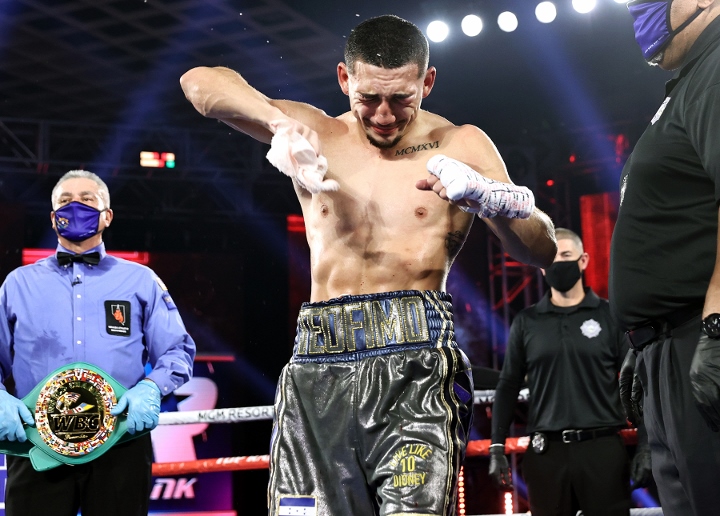 When Lopez sought a fight against Lomachenko, with or without the well-known incident involving Teofimo, Sr. and Lomachenko at the   Hotel in New York City in December 2018, fight fans scoffed at the idea. Very few people and media gave the 23-year-old a chance to win, let alone compete in the same ring.

Even when Lopez knocked out Richard Commey to win the IBF title on December 14, further fanning the flames of a future Lomachenko fight, several people, even media, mistook Lopez confidence as cocky and machismo, thinking there was no way Lopez would win.

Lopez talked a good game, but he backed up every single word that came out of his mouth leading up tp Saturday night, deflecting any criticism or critique that Lomachenko was going to use his superior boxing skills and experience to defeat, even knock Lopez out.

That should be the real focus. Not that Lomachenko was beaten, a lot of times outboxed by the bigger and stronger Lopez, but that Lopez threw and landed more total punches in the fight. Then there is the argument that Lomachenko started too soon or finally began letting go of his hands during the second half of the fight. Look what Lopez did during the first half of the fight: An effective game-plan that worked, including initiating exchanges, varying his offense, and utilizing his speed that took away any offense Lomachenko attempted.

What is next for Lopez?

He will likely bask in his accomplishments over the next couple of weeks, including becoming the youngest ever to win all four world titles in a division and the only lightweight in history to own all four title belts.

At Saturday’s post-fight press conference, Lopez stated he would not give Lomachenko a rematch. Promoter Bob Arum stated a rematch clause was never included in the contract.

Amongst the world title belts he won, Lopez won the WBC ‘Franchise’ belt. A fight against WBC titleholder Devin Haney does make sense.

Lopez will likely look at moving up in weight and fight at 140 pounds. Lopez did state he is looking at fighting the winner between IBF/ WBA titleholder Josh Taylor and WBC/ WBO junior welterweight titleholder Jose Ramirez. A move up to the welterweight division in the next year or two is not out of the question.

Lopez may or may not have hit his ceiling as a pro and maybe Saturday’s win over Lomachenko could be his best win as a pro. Give Lopez credit though. Ever since he came out of the 2016 Olympic Games in Rio de Janeiro and after turning pro later that year, Lopez has wanted to be a great fighter and was never scared at fighting the best.

Case in point, the Lomachenko fight. Lopez fought the fight of his life and won. If Lopez believes he can contend and defeat Taylor or Ramirez, why not listen to him? He showed what he could do against Lomachenko.

Rather than scoff or call him crazy at anything he says, maybe more people should listen to Lopez instead.