Reigning flyweight titlist Julio Cesar Martinez will proceed with his next title defense, as he will face countryman Moises ‘Taz’ Calleros in a scheduled 12-round contest. The bout serves part of a stacked DAZN-USA show live from Gimnasio TV Azteca in Mexico City. which features three title fights.

Calleros (33-9-1, 17KOs) enters as a late replacement for Maximino Flores, whom tested positive for COVID-19 as BoxingScene.com previously reported. 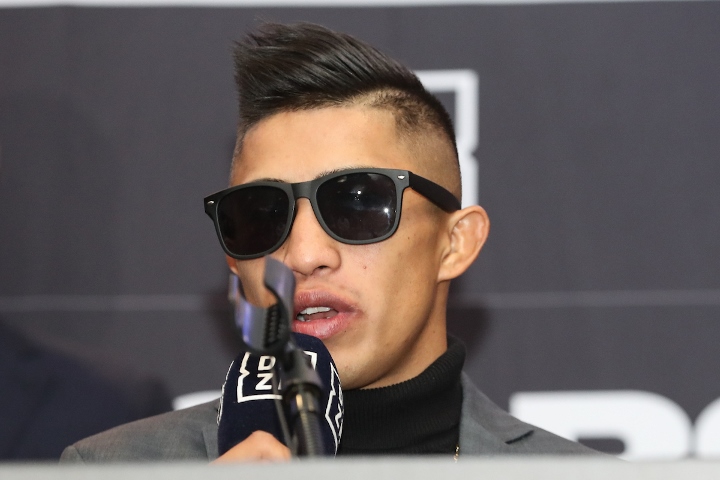 Martinez will make the second defense of the flyweight title he violently snatched in a 9th round stoppage of Cristofer Rosales last December in Phoenix, Arizona. The win came four months after having believed to have won the belt, only for his knockout win over Charlie Edwards to be ruled a No-Contest due to landing a body shot while Edwards—the defending champ at the time—was on the canvas.

The lone defense of Martinez’s reign thus far came earlier this year, scoring a 12-round unanimous decision over previously unbeaten Jay Harris in their entertaining clash this past February. Friday’s bout will mark his first in his home country since a knockout win over Andrew Selby last March to position himself as the mandatory challenger. It will also serve as his first fight in his hometown since August 2018.s

Calleros steps well up in class but is riding a five-fight win streak heading into his first career title fight. The closest he’s come to previously fighting for a major belt was in a February 2017 loss to Tatsuya Fukuhara for an interim strawweight title.

The 31-year old from Monterrey last fought in early February, scoring a six-round decision win in a stay-busy affair.

Headlining the show, Juan Francisco Estrada (40-3, 27KOs) will attempt the second defense of his lineal 115-pound championship in a rematch with countryman and former titleholder Carlos Cuadras (39-3-1, 27KOs). Estrada outpointed Cuadras in their September 2017 non-title fight.