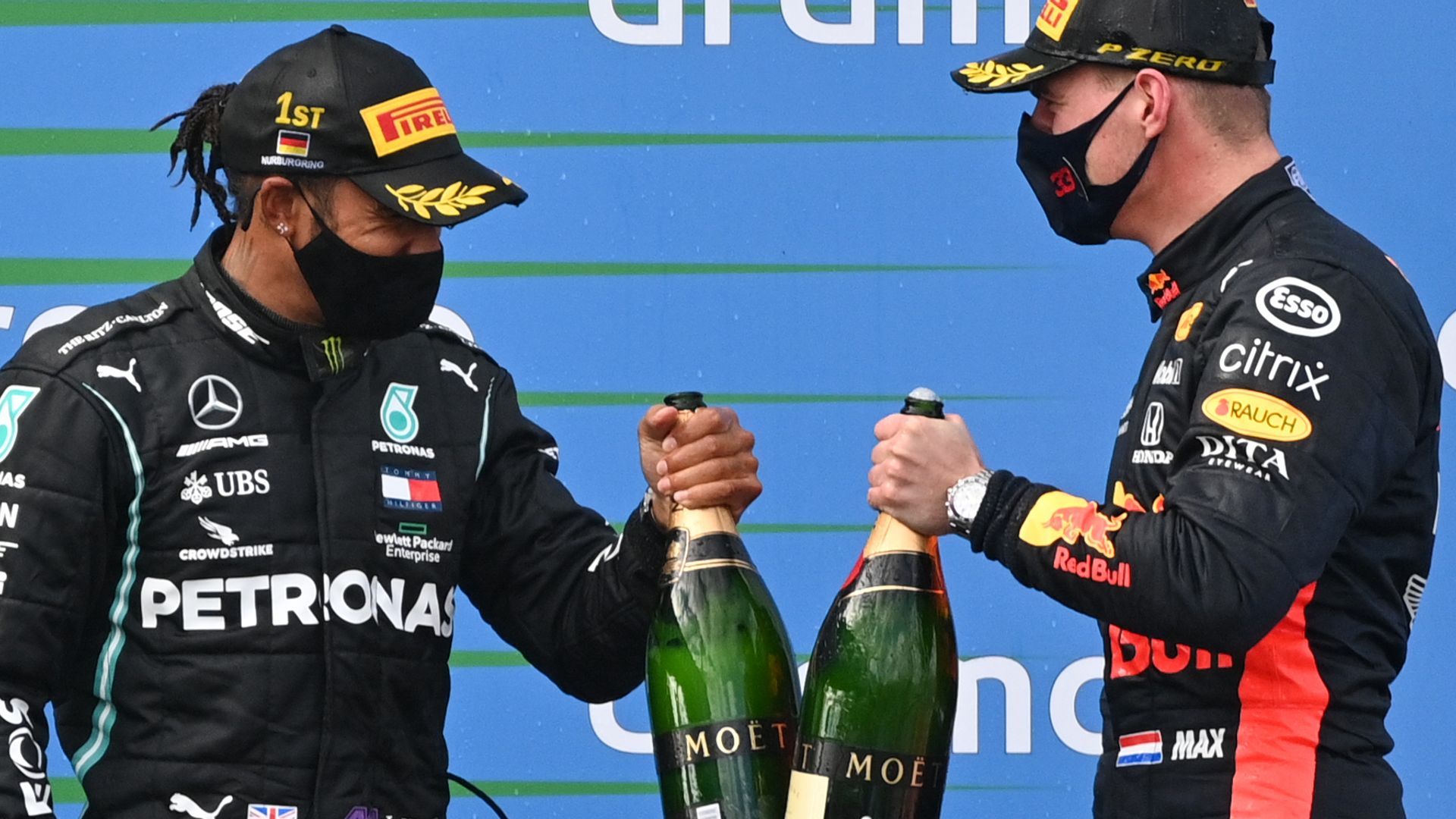 “I think you’re going to see the closest racing probably between us two and our team in the next 12 months,” predicts Hamilton

Lewis Hamilton believes his battles with Max Verstappen will only intensify over the next 12 months with F1’s champion expecting Mercedes and Red Bull to remain as close as recent races.

Although Hamilton and Mercedes are fast closing on yet another world championship double, the pace gap has closed between F1’s top two teams at recent events with Red Bull improving the handling and performance of their RB16 car.

Verstappen finished second to Hamilton at the last race in Germany, the Dutchman’s sixth top-two result in the last nine events.

Speaking to Sky Sports F1 after winning at the Eifel GP, Hamilton said of his Red Bull rival: “He’s such a great talent, he’s so fast and consistent.

“So it’s not easy to beat this young up-and-coming champ.”

Hamilton is expecting the two-team fight to continue over the season’s final six races and then into next season, when cost-saving rule changes mean teams can only make limited changes to their 2020 cars.

“You saw they had the fastest lap at the end [at the Nurburgring], and I pushed as hard as I could to get the fastest lap. So they’ve got a great car and I think they are continuously improving,” said Hamilton of Red Bull.

“So I think it’s going to be this close between us, particularly for the rest of the season.

“There’s going to be tracks that might favour them, maybe, and then going into next year it is a similar car to what we have so I think you’re going to see the closest racing probably between us two and our team in the next 12 months.”

The scene of a record-setting debut for Portimao?

As part of a run of four races not on the original calendar for this year, F1 returns to Portugal for the first time in 24 years this weekend – and races at the Portimao circuit in the Algarve for the very first time.

The Grand Prix debut for the undulating track, where Hamilton tested for McLaren in 2009, could be the scene for the six-time champion claiming a record-breaking 92nd F1 victory, after he equalled Michael Schumacher’s benchmark of 91 last time out.

Not that Hamilton says that winning gets any more straightforward the longer his F1 career goes.

“What’s crazy is that every weekend, 91 wins, it never gets any easier. I can tell you that,” said the Mercedes driver.

Hamilton leads Mercedes team-mate Valtteri Bottas, who retired from the last race, by 69 points in the Drivers’ Championship, while Verstappen is a further 14 points adrift.

There are 156 points left to play for across the season’s concluding six events.