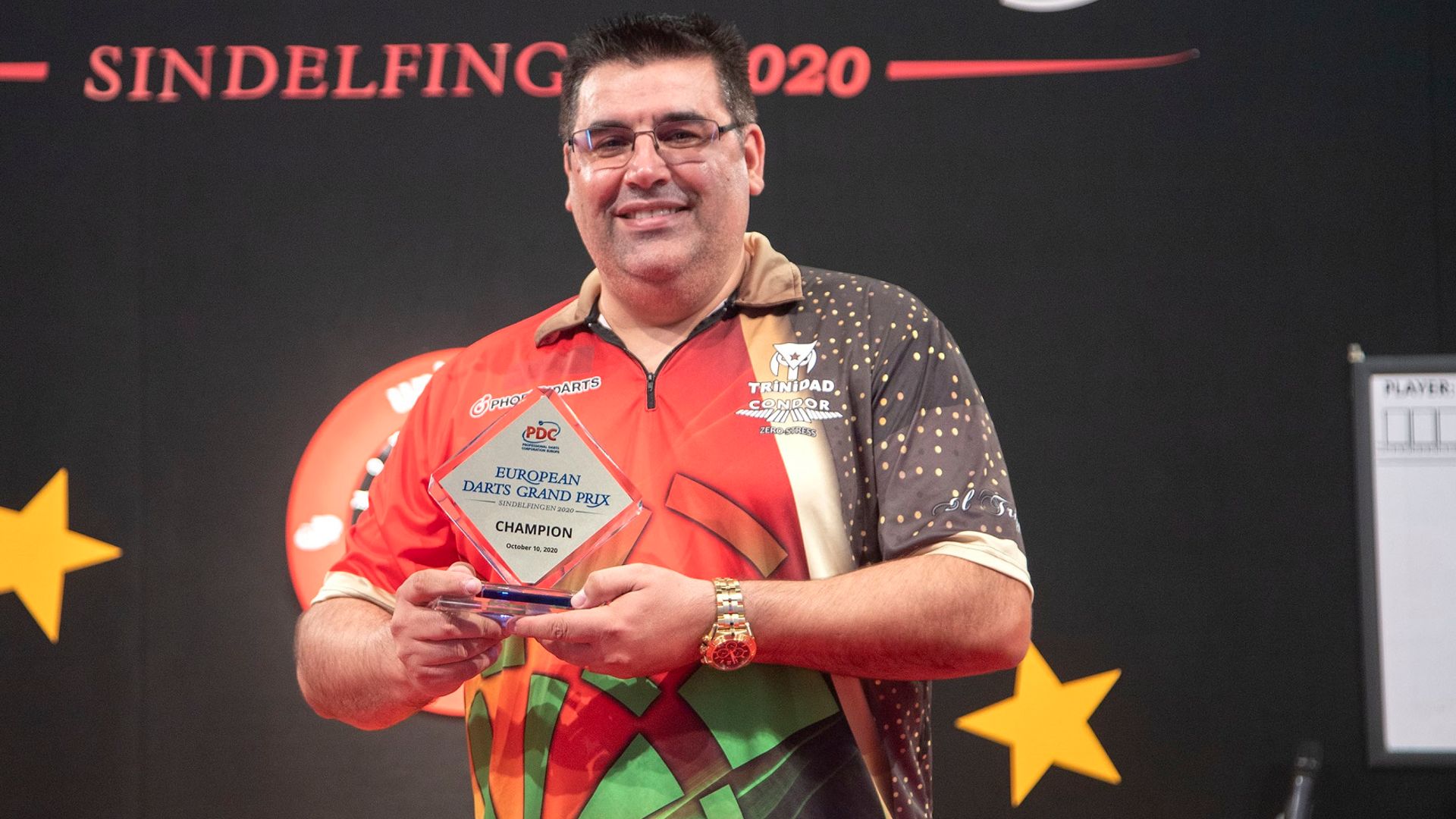 In the third of four events that will constitute this season’s European Tour on the continent, De Sousa was in a class of his own to lift the biggest title of his career thanks to an 8-4 victory over Van Gerwen in Sunday night’s final in Sindelfingen.

Catch up with all the latest news, interviews and expert opinion, every fortnight

The 46-year-old only joined the PDC circuit full-time last year but has wasted little time in making his mark and having claimed two Pro Tour titles at the end of last year his remarkable consistency has seen him rise to 37 in the world rankings.

“I can’t describe my feelings because it’s unbelievable,” said De Sousa who fired in seven 180s and averaged more than 106 in his victory over MVG that saw him claim the £25,000 first prize,

“Every title I win, it’s a dream because it’s so difficult, but this is my biggest title and I’m very, very happy.

“I thank the crowd, they were wonderful and this title is for me and all of them. I want to share it with them and all the people who support me; my management and my family.

“I can do anything right now, that’s what I think. It doesn’t matter who I play against, I just play my game. I know that I can do it and I have so much confidence in my game.”

Less than a week on from the final of the World Grand Prix and 72 hours on from the conclusion of the Premier League, the darts season continued at pace, with De Sousa joining Gerwyn Price and Devon Petersen in winning European Tour events.

Crowds were in attendance in Germany as the PDC continues to work with German and Austrian governments to allow fans into a safe environment to watch sport amid the ongoing coronavirus pandemic.

Having whitewashed Germany’s Ricardo Pietreczko to begin his challenge on Saturday, De Sousa showed his title credentials with a fine 6-3 third-round defeat of world No 2 Price.

He backed that up with a 98 average in a 6-4 quarter-final defeat of Darius Labanauskas, before surviving one missed match dart against Ian White in a thrilling semi-final.

De Sousa averaged almost 106 in the final, and allowed Van Gerwen just five darts at a double in a brilliant display. The pair traded 84 finishes in the opening two legs and were locked after four before De Sousa took three in a row, including an 11-darter to break and finishes of 87 and 86.

Van Gerwen replied with two 14-darters in the next three legs, but a huge 146 checkout from De Sousa moved him 7-4 up before he wrapped up the win by taking out 88 for a 12-darter.

Van Gerwen had survived missed match darts from both Vincent van der Voort and Nathan Aspinall on Sunday, but hit top form with a 170 checkout and a 7-1 semi-final win over Mensur Suljovic.

The fourth and final event of the European circuit will take place in Riesa next weekend and at the conclusion the top 32 players from an Order of Merit across the four events will compete in the European Championship in Oberhausen, October 29-November 1.

Darts in back on Sky Sports in November with a double bill, starting with three days of coverage from the World Cup of Darts (Nov 6-8) and continuing with nine days of the Grand Slam of Darts which gets underway on November 16.