A tale of two fights for Vasiliy Lomachenko, who landed just 31 punches in the first 7 rounds. Teofimo Lopez fought a disciplined fight, landing an average of 15 of 55 punches per round.

Loma came on in rounds 8 thru 11, but Lopez closed the show by landing a fight high 50 punches, the most ever in a round by a Lomachenko opponent. Lopez’s 148 landed power punches were the most by a Loma opponent. 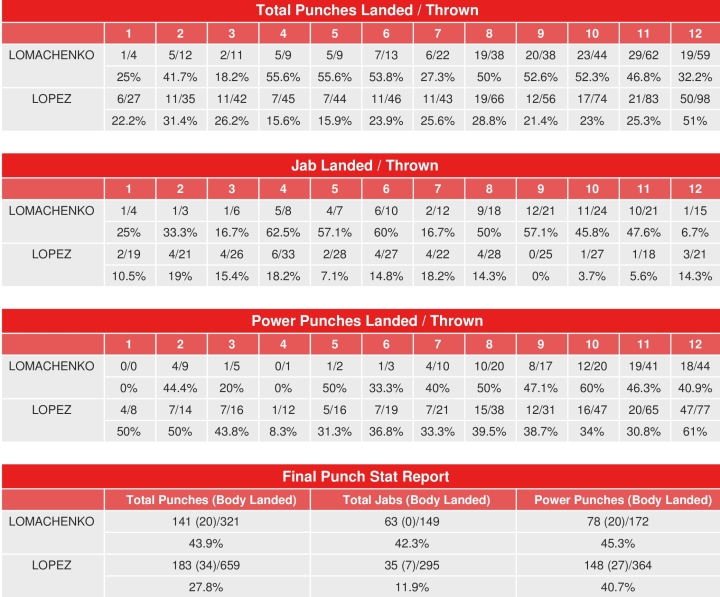 Lopez was coming forward as the contest started, looking to take the lead early. He was getting the jab going. Lomachenko was get a read for his opponent and not doing too much. Lopez was going to the body to slow down the movement of Lomachenko.

Lopez was jabbing early in the second and landing well with his power shots to the head and especially to the body. Lomachenko began to get his hands going at the end of the second to land punches that got Lopez’s attention. Lopez continued to do very well in the third, as he was outlanding Lomachenko and pressing the action.

In the fourth, Lopez continued to keep Lomachenko at bay with his jab and shots to the body. The fifth was more of the same, with very few punches thrown by Lomachenko, and Lopez hitting the body and pressing the action. The sixth round was a little closer, with Lopez closing strong with two big punches.

Lomachenko was starting to take more chances to get in offense during the seventh, but Lopez was still in control. During the eight, Lomachenko began to get his hands going and was starting to land some punches. They were trading during a moment, but Lopez withstood the rally and began to come back at the end. In the ninth, Lomachenko continued to rally and he turned up his output. Lopez continued to fire back when necessary.

The tenth was more for the Lomachenko rally, as his activity turned up and he was able to outland Lopez. In the eleventh, it was pretty much all Lomachenko – until the final thirty seconds when Lopez was blasting away to his body.

During the twelfth, Lopez was unloading hard punches on Lomachenko and appeared to have him in some trouble during the final seconds before a brief time was called to check on a cut on Lopez from a clash of heads.