MGM Grand Conference Center, Las Vegas – There were many reactions to the shocking outcome of the big fight on Saturday night.

In a showdown for the WBC franchise, WBA, WBO, IBF lightweight titles, Teofimo Lopez (16-0, 12 KOs) put on a masterclass performance to win a twelve round unanimous decision over Vasiliy Lomachenko (14-2, 10 KOs). 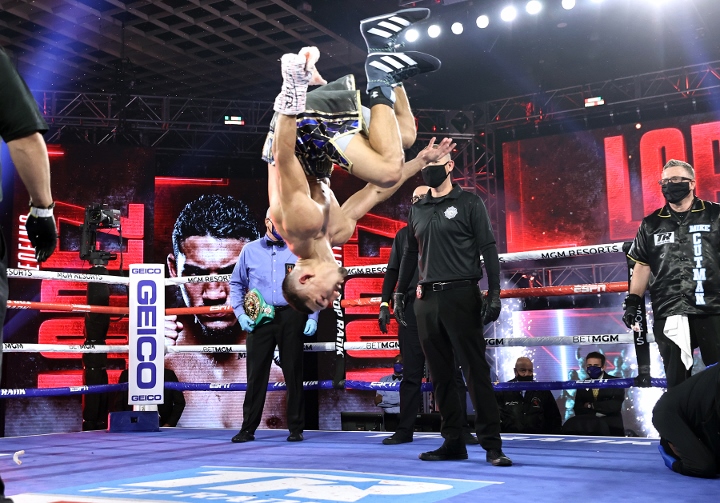 At 23-years-old, Lopez becomes the youngest fighter in history to unify all four sanctioning body titles. He becomes the fifth male fighter to accomplish such a feat – with Bernard Hopkins, Jermain Taylor, Terence Crawford and Oleksandr Usyk being the other three.

Lomachenko lost for the first time in six years.

Teddy Atlas – Again what fighters do inside that ring is gallant and Noble. What the judges do outside it is anything but. Tired of saying it, and sick of seeing it. Again I have no problem with fight going to Lopez, he earned it, but Loma did not deserve to hear the scores that wide. #LomachenkoLopez #LomaLopez

Mike Tyson – Brooklyn was definitely in the house tonight. Lopez is the man to beat. Another Brooklyn champion.

Ryan Garcia –  I got my fight against Luke Campbell but I would love to fight Lopez, there is still a lot of unanswered questions in this lightweight division

Jamel Herring – We’re not going to do this… say what you want about the SCORES, but the RIGHT man won. It was a good fight.

Enzo Maccarinelli – Lopez was brilliant,I’d like to see it again though.  Loma being out for a year at his age especially as his main attributes are supreme distance and timing could’ve played a massive part in his inability to start working before 7rds or Lopez could’ve just have his number

Terence Crawford – I been telling Top Rank for years Teofimo Lopez was ready. Good job young fella we been talking about this day for years

Kell Brook – What a fighter! You did exactly what you told me you were gonna do. Enjoy the moment

Michael Conlan – Just to big and strong!! I thought Loma would be good enough to grind out the win but Teofimo was brilliant tonight. Well deserved champ, youngest four belt champ in history