Lopez upset Lomachenko by big margins on all three scorecards in their 12-round, 135-pound title unification fight at MGM Grand Conference Center. The youngest fully unified champion in the sport’s four-belt era out-boxed a favored former champ who is widely viewed as one of the most intelligent, skillful technicians of his generation.

Lomachenko’s extremely slow start surprised Lopez, who won by scores of 119-109, 117-111 and 116-112. The Ukrainian southpaw’s punch output increased during the second half of their bout, but Lomachenko couldn’t overcome the lead Lopez built.

“I expected more,” Lopez said during a post-fight press conference. “A lot of people were talking highly about him and I expected more, but basic – he was pretty basic, honestly, overall. Maybe it was a 14-month layoff that did it. I don’t know. I mean, but I had a 10-month layoff, so why does it matter?” 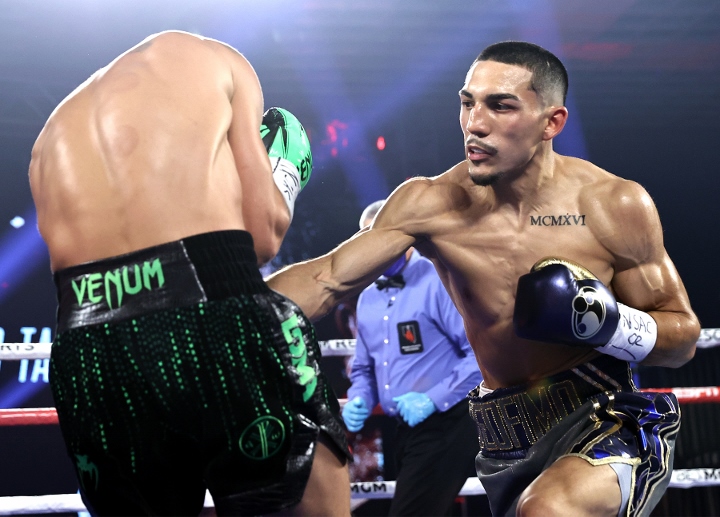 The 32-year-old Lomachenko (14-2, 10 KOs) hadn’t fought in 13½ months before boxing Lopez. The three-division champion defeated England’s Luke Campbell (20-3, 16 KOs) by unanimous decision in his previous appearance, a 12-rounder in August 2019 at O2 Arena in London.

Despite their age gap and his long layoff, odds-makers listed Lomachenko as a 4-1 favorite over Brooklyn’s Lopez entering their much-anticipated showdown.

“I fought the guy that everybody says is the pound-for-pound [king] and everyone [talks highly] about,” Lopez said. “You know, he’s gonna be inducted into the Hall of Fame for doing one thing – three-time fastest, three-time weight-division champion, along with Claressa Shields. But that’s it, you know?. Everybody’s always gonna remember this fight with me. You know what I mean?

“About Lomachenko, we talked the talk and we walked the walk. That’s what I do, man. My father just doesn’t talk sh-t just to talk sh-t. He believes in my abilities. I’m smart when I’m in there, you know, and I peeped a lot of things. But, you know, facing someone like that and doing what I did, you guys haven’t seen anything yet.”