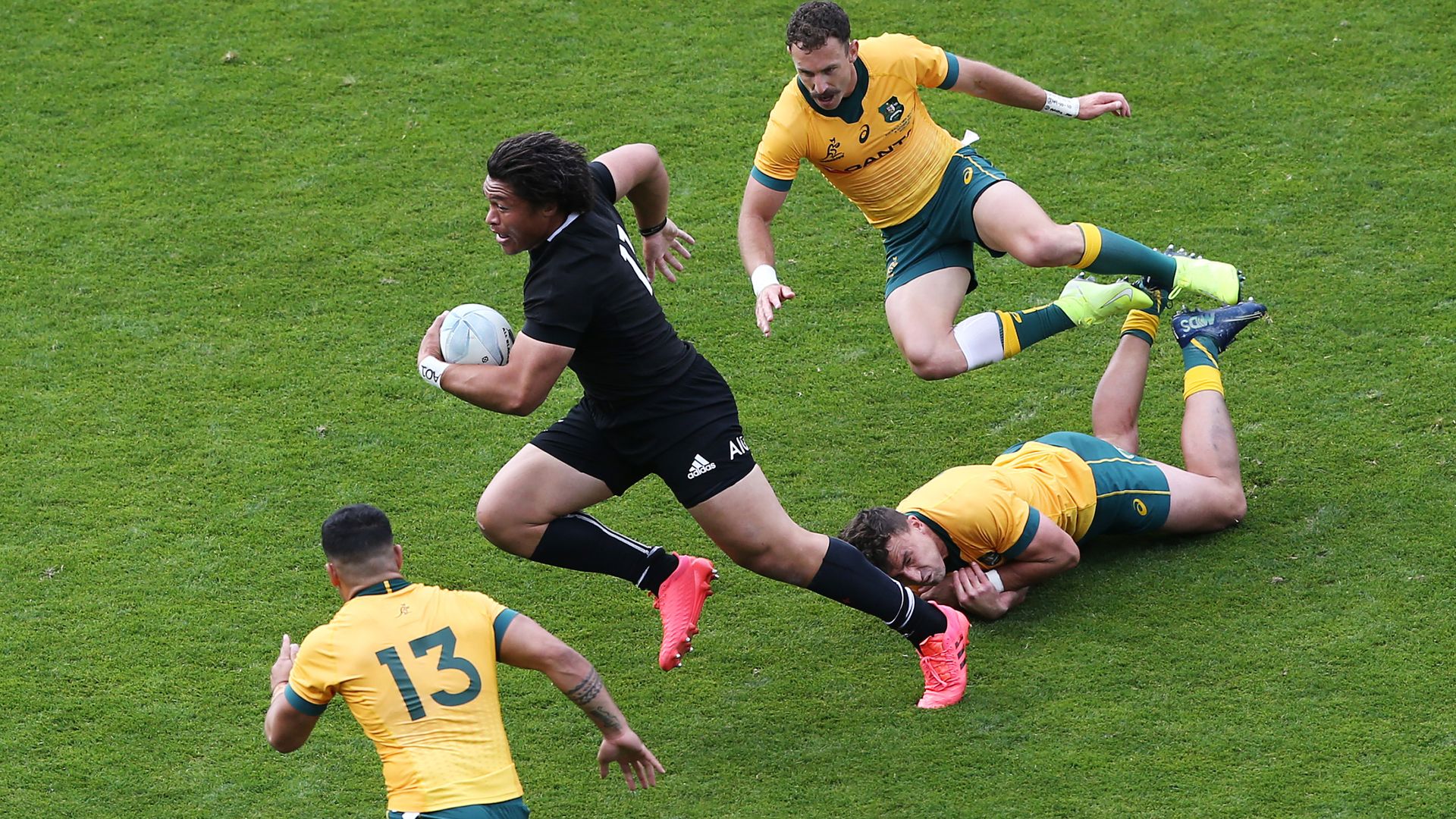 New Zealand beat Australia in second Test in front of a crowd of 46,900 at Auckland’s Eden Park

Caleb Clarke energised a struggling All Blacks team and lifted them to a 27-7 win over Australia in the second Bledisloe Cup rugby Test on Sunday.

In his first run-on appearance after making a debut from the bench in the first Test last weekend, Clarke became the All Blacks’ most dangerous weapon, carrying the ball with ferocity and making great inroads into the Australia defence.

During the first half, he helped spark a lethargic and under-pressure New Zealand team, making his damaging runs mostly out of defence but still thrilling a crowd of 46,900 at Auckland’s Eden Park.

But in the 45th minute, he was handed a rare attacking chance in the open field. Wallabies fly-half James O’Connor skewed a clearing kick infield and it fell to Clarke in open space. He set off downfield with gathering momentum, first running between two defenders then fending another. Like a snowball downhill, he gathered pace and energy and more defenders fell at his feet.

Finally and after more than 40 meters, his progress was halted but the All Blacks quickly recycled possession and the ball was moved to Ardie Savea who scored a try which gave the All Blacks their first sense of comfort.

New Zealand held a brittle 10-7 lead at half-time but a try to winger Jordie Barrett, then Clarke’s gift to Savea made the game safe for the home team. New Zealand had not been beaten at Eden Park by any team since 1994 and not by Australia since 1986, before any of the current team was born.

Australia again started strongest, as they had in the drawn first Test in Wellington. They held the ball through multiple phases and forced the All Blacks to make numerous tackles, hitting hard in the collisions and taking a high physical toll.

The first points of the game didn’t come until the 17th minute when the All Blacks captured some overdue possession and began to test the Australia defence, creating a penalty to fly-half Richie Mounga.

The All Blacks briefly kept the upper hand and attacked again. From a five-meter scrum near the right-hand touchline center Jack Goodhue crashed into the centre of the Wallaby defence; the ball was quickly recycled and scrum-half Aaron Smith darted around the fringe to score.

The first half continued at a high tempo with the ball often pin-balling between teams as it was dislodged in hard tackles. The Wallabies were as quick as they were in the first Test to scent and exploit attacking chances.

When backrower Ned Hanigan cracked the All Black defense in the 29th minute he was able to link with captain Michael Hooper. The Wallabies had numbers on the left and after prop Taniela Tupou held up the defence, the ball moved quickly left to winger Marika Koroibete who scored.

New Zealand was happy to be able to clear the ball to touch and go to the locker rooms with a three-point half-time lead.

They came out with more intent in the second spell and scored quickly through Jordie Barrett, then Savea to swell their lead to 20-7.

Australia were twice denied in critical moments which kept the tide of the match flowing in New Zealands favour. Mounga made a try-saving tackle on Wallaby winger Marika Koroibete in the 50th minute and Australian hooker Brandon Paenga-Amosa was denied a try after reaching through a maul a minute later.

New Zealand seized back momentum with a try to Cane, initiated by Beauden Barrett in the 54th minute.

Barrett, who missed the first Test through injury, also brought a sharper edge to the All Blacks attack.

The teams now head to Australia where they will meet on October 31 and November 7 in the first two Tests of the Rugby Championship.