Barboza had no idea what they were talking about. The unbeaten junior welterweight soon learned that his father, who also trains him, had agreed to a fight Saturday night against Alex Saucedo if he defeated Tony Luis in their 10-rounder that night.

“I didn’t even know,” Barboza told BoxingScene.com. “My dad was like, ‘I already knew, but I didn’t wanna distract you from this fight. I didn’t want you to overlook this guy or anything.’ So, it was kind of crazy, man. I was like, ‘Oh, all right, cool.’ We took a week off and I [went up] to Big Bear to train.” 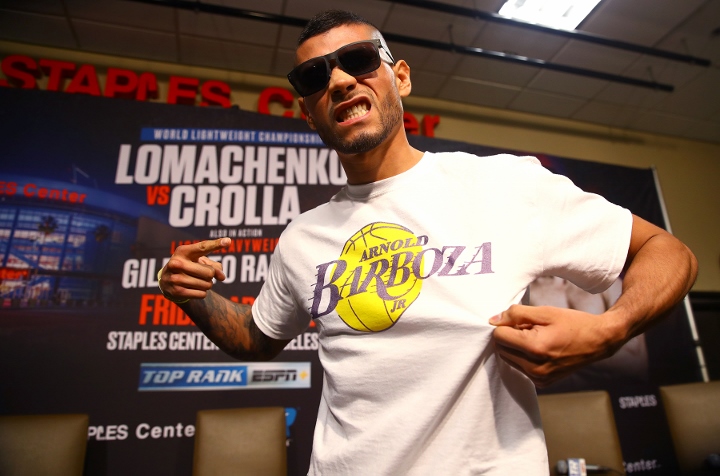 The 28-year-old Barboza (24-0, 10 KOs), of South El Monte, California, didn’t mind this quick turnaround after easily out-pointing Canada’s Luis (29-4, 10 KOs) because battling Saucedo (30-1, 19 KOs) represents the biggest fight of his career. The fact that their 10-round, 140-pound bout is the co-feature that’ll immediately precede the much-anticipated showdown between Vasiliy Lomachenko and Teofimo Lopez made his father’s decision a no-brainer.

“I’m just happy that Top Rank has the faith in me and Saucedo to put us on a card of this magnitude, in the co-main, because, I mean, this is the ‘Fight of the Year,’ ” Barboza said. “Everyone is excited for Loma-Lopez, and I think me and Saucedo are gonna be a good appetizer, like Bob Arum said, for this fight. It means a lot to me, but at the same time, I’m not just happy to be here. I know I’ve got a job to do.”

The 28-year-old Barboza realizes this will be “by far” the most difficult job he has accepted since making his pro debut in June 2013. Saucedo has lost only to Maurice Hooker (27-1-3, 18 KOs), who overcame a second-round knockdown to stop Saucedo in the seventh round of their fight for Hooker’s WBO 140-pound crown in November 2018 at Chesapeake Energy Arena in Oklahoma City, Saucedo’s hometown.

ESPN and ESPN Deportes will air the entire eight-bout Lomachenko-Lopez card Saturday night, starting at 7:30 p.m. ET/4:30 p.m. PT. The whole show will be streamed live on ESPN+ as well.

Joe Joyce: Tony Yoka Needs To Do The Work To Get in Position To Challenge Me