I don’t know Shawn Simpson, but I know the type of man he is.

Like his peers in the boxing business, he’s used his fists to not just try and make a better life for himself, but for his family, including a son, Amir, who just turned a year old in July.

Some may deny it, but that’s every professional boxer’s goal, because why else would anyone risk their health night in and night out just for the love of the game, the desire for competition, or for the glory that comes with world championships and pay-per-view megafights?

This is a hard game, the hardest game according to the late, great Hugh McIlvanney, and for every Floyd Mayweather or Andre Ward who made it to the top and got out with their money and health intact, there are those who never got to where they wanted to go, left with uncertain futures after the sport they loved didn’t love them back.

Simpson, 26, is 12-0 with four knockouts as a pro. A decorated amateur who was a 2012 U.S. Olympic team alternate, the Chicago native has been competing since he was eight years old, and he was scheduled to make his second start of 2020 on September 24.

That didn’t happen. Instead, the talented bantamweight with world championship aspirations now has that uncertain future. Hit in the back of the head during a sparring session in Las Vegas, Simpson told Brawler Sports Media’s Rick Mohamed that he went on to suffer headaches for a week after the session, but went back to the gym to get in the ring again. His father, Tony, knew immediately that his son wasn’t right, and an ambulance was called.

Once at the hospital, it was determined that Simpson was experiencing internal bleeding and swelling near his brain. The fight was off and perhaps the same thing will be said for his career.

Doctors told Simpson that he can’t have anything to do with the sport for eight months to a year. That’s the optimistic slant, that maybe, just maybe, he’ll get a green light to compete again.

“My quest is to come back within a year,” Simpson told Mohamed. “But if I can’t, I’m okay with it as long as I’m able to take care of my son.”

That’s a fighter. And Simpson is certainly that, even though he wouldn’t fit the mold of someone you would expect to leave the sport with an injury like he has. He’s not a face-first brawler, willing to take two punches to land one. As he wrote on the GoFundMe page set up to aid with his bills during this time, “As you can imagine this news has been extremely difficult to digest. Especially since I am a defensive fighter who in 12 National Championships along with being the 2012 Olympic Alternate as an amateur, to being a 12-0 Professional Boxer with 4 KOs, has never even had a nose bleed. I always prided myself on my ability to hit and not get hit, as is the name of the boxing game. So to receive this potentially career ending blow to the back of my head while sparring, is particularly hard on me, mentally and physically.” 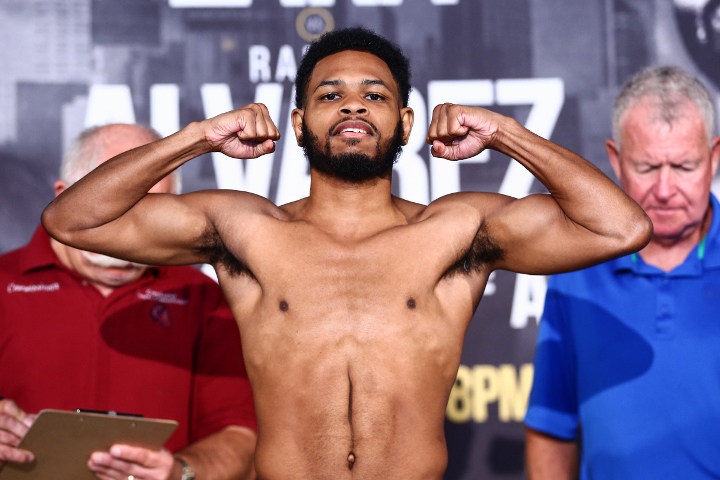 It should be hard news to hear for anyone who competes in, works in, covers, or watches the sport. This wasn’t the stereotypical “opponent,” the fighter willing to trade punches and brain cells for a paycheck. This was a young man entering his prime, a talent who could have made it to the places only a select few reach.

In other words, it was a reminder that this can happen to anyone who puts on gloves and steps into the ring to throw punches.

Simpson’s news reached a wider mass audience just days after the clear favorite for 2020 Fight of the Year between Jose Zepeda and Ivan Baranchyk captivated the boxing world, with eight knockdowns being traded back and forth before Zepeda ended matters in the fifth round. The fight blew up on social media as it was going on, fans thrilling to the willingness of both fighters to live up to the old adage of leaving it all in the ring.

Yet as soon as Zepeda ended the fight, the euphoria turned to concern as Baranchyk spent an extended amount of time on the canvas after the knockout. That concern only rose as he was immediately taken to a local hospital in Las Vegas, even though all signs were that the Belarus native was recovering well.

Soon, photos were released of Baranchyk eating ice cream with promoter Tony Holden after he left the hospital, and he posted “Everything is good, I need time for think about my mistakes” on his Facebook page. We could all exhale. At least until the next time he fights, when we will look for the slightest sign that he’s not right. ESPN commentator Tim Bradley said of Baranchyk after the fight, “A piece of him was left in the ring tonight. A piece of him was left, and he’ll never get it back.”

Bradley knows what he’s talking about, yet even after his punishing 2013 war with Ruslan Provodnikov, he went on to several big fights and big wins. So maybe Baranchyk will do the same. Maybe Shawn Simpson will get his chance to compete again and perhaps pull off an epic comeback by winning a world title.

Or maybe he’ll just be another one of the sport’s casualties, forced to adjust to a new normal that has nothing to do with boxing.

Stories like Simpson’s always bring me back to Gerald McClellan, one of the most fearsome punchers in boxing history and a former middleweight champion who was on top of his game when he faced Nigel Benn in 1995 and was permanently injured. Like Simpson, McClellan didn’t fit any stereotype of the fighter who would get such a diagnosis from his in-ring activity. He was on the fast track to a showdown with former amateur opponent Roy Jones Jr., and from there things would only get bigger for the Illinois native.

But all those future ring plans ended on one night in London, just like Simpson’s may have ended in Las Vegas.

That’s as blunt and real as it gets, but if you’re going to cheer when times are good, you have to also realize that there is another side. On November 7 at JR’s Place in Freeport, Illinois, Gerald McClellan’s sister and longtime caregiver, Lisa, will team up with Ring 10 New York for a benefit dinner entitled Life After Boxing. The event is a celebration of those who gave everything to their sport, while also reminding everyone that when the spotlight has dimmed and the cameras and media are gone, there are men and women who could use a little help, whether it’s financially or even in the form of some recognition, a thank you for giving up so much to entertain us.

You don’t hear this type of thing when it comes to other sports, mainly because other sports don’t take so much from those who compete in them. Sure, recent findings on CTE in professional football has put those players into the same category as boxers, and there are examples in practically every sport of those who were forever changed by their competitive lives, but nothing takes as much as boxing.

We will still watch. We will still cheer, still boo, and still debate the merits of those who step between the ropes. And that’s okay. The fighters know the risks they’re taking and they’ve accepted them. And if they choose to fight, we can still choose to enjoy it and get invested in it.

But let’s do something extra the next time we watch a fight. Let’s hope that everybody comes out healthy and that if something does go wrong, they will get the best care and be able to live a life that may not have boxing in it, but that can still be fulfilling.

That’s what I hope for Shawn Simpson.

For more information on the Life After Boxing dinner, visit https://ring10.org/