An all-Pennsylvania showdown versus Joseph Adorno—which was due to take place October 9 in Las Vegas—is no longer in play for the 26-year old lightweight from Philadelphia, BoxingScene.com has learned. The fight fell apart on Tuesday, when all parties involved were informed that Sparrow is not making the trip to Las Vegas in having officially withdrawn from the contest.

The rest of Friday’s show will move forward as scheduled, headlined by a vacant featherweight title fight between Emanuel Navarrete (32-1, 28KOs) and Ruben Villa (18-0, 5KOs) which airs live on ESPN from The Bubble at the MGM Grand (Friday, 10:00 p.m. ET). Sparrow’s clash with Adorno was due to top the preliminary undercard which was to stream live on ESPN+ preceding the linear televised doubleheader. 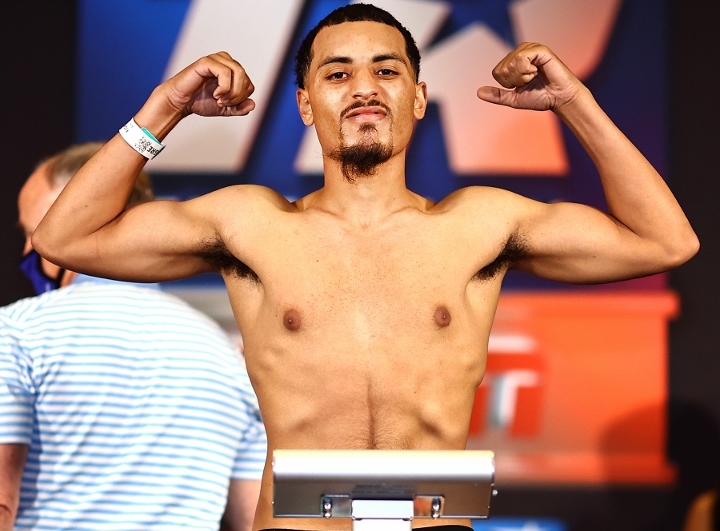 Sparrow (10-2, 3KOs) was given a chance at redemption earlier this summer, accepting a short-notice assignment versus unbeaten junior lightweight prospect Abrahama ‘El Super’ Nova (19-0. 14KOs). Their June 25 clash—which aired live on ESPN—proved to be competitive, with Sparrow dropping a 10-round decision but offering a strong enough account of himself to where Top Rank was willing to bring him back.

This latest incident not only ruined those plans, but likely puts him on the banned list with any prominent promoter.

Sparrow became infamously known for the manner in which he was forced out of a fight with unbeaten lightweight Ryan Garcia which was to have aired on DAZN last September from Dignity Health Sports Park in Carson, California. Sparrow was apprehended by law enforcement just hours before their pre-fight weigh-in, as he was extradited back to Philadelphia on an outstanding warrant for a matter which has since been cleared up in terms of being able to proceed with his career.

The incident left Garcia without an opponent and Golden Boy Promotions without a serviceable co-feature that evening. Still, the promotional outfit was willing to bring him back two months later for a DAZN show in Indio, California, only for Sparrow to withdraw. The boxer never made it to the airport, claiming dehydration and an inability to make weight as the cause for his withdrawing from a bout with James Wilkins.

All told, Sparrow hadn’t fought in 15 months—since a March 2019 win over crosstown rival Hank Lundy—by the time he faced Nova on short notice. Sufficient time was provided to prepare for Allentown’s Adorno (14-0-1, 12KOs), although sources have informed BoxingScene.com that weight was once again an issue.

Ironically, Sparrow’s last fight came two nights after Adorno was pulled from a June 23 show over his inability to make lightweight for an eventually canceled fight with Alexis del Bosque.

The withdrawal from that fight and now this cancellation leaves Adorno—barring a late replacement secured, which is highly unlikely—out of the ring since an eight-round draw with Hector Garcia this past January in Atlantic City.