Vasiliy Lomachenko and his team have been entertained by the trash talk offered by Teofimo Lopez—though only to a point.

The upcoming World lightweight championship clash between the two best 135-pound fighters on the planet can easily be classified as a grudge match, even if much of the anger comes in one direction. Brooklyn’s Lopez (15-0, 12KOs) has never held his tongue when it comes to measuring up any opponent, although it has been ramped up whenever the discussion is of the three-division and reigning unified lightweight titlist he faces on October 17 in Las Vegas.

“I want to say big thank you to Teofimo and his father, they promote our fight,” Ukraine’s Lomachenko (14-1, 10KOs) noted during part one of the two-part “Blood, Sweat and Tears: Lomachenko vs. Lopez” series, which aired Sunday evening on ESPN. “I don’t need to do any small talking.” 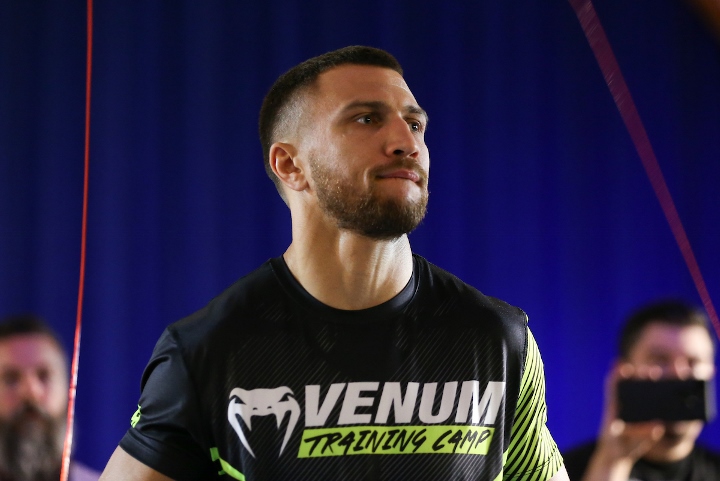 Lomachenko has allowed his in-ring actions to speak for him, and his accomplishments have spoken volumes. The Ukrainian southpaw is a two-time Olympic Gold medalist and widely regarded as among the greatest amateur boxers in history. His talents helped fast track a pro career that has seen title wins in three weight divisions, including his collecting three belts at lightweight which will be at stake along with Lopez’s IBF 135-pound strap.

Lopez has been talking up the fight ever since breaking out as 2018 Prospect of the Year. The campaign was followed up by his first title win, annihilating Richard Commey inside of two rounds last December, with Lomachenko seated ringside. The feat set the stage for what was supposed to be a May 30 showdown, only for the ongoing coronavirus pandemic to stall those plans.

None of the downtime dampened the enthusiasm of Lopez, who has said plenty of his upcoming rival. Lomachenko’s side has a theory as to why that has been the case.

“He is jealous of how much attention Loma gets from people and he wants to get it,” insists Egis Klimas, Lomachenko’s career-long manager. “I think for Teofimo Lopez will learn his lesson. I don’t think he realizes what he is walking into.”

Lomachenko is not above trash talk, although it comes in a more subtle manner. Even disregarding the language barrier for his constantly improving English, there comes a time when action simply has to speak louder than words.

“You can’t just talk, talk and talk,” claims the pound-for-pound entrant. “In my country, we have different rules. If we were back in my country, he would learn pretty quickly that he can’t run his mouth like that. As I said before, if you say you’re going do something you bave to back it up.

“I’m definitely not going to feel sorry for him. If I have the chance to cause him pain, I’m going to do it.”