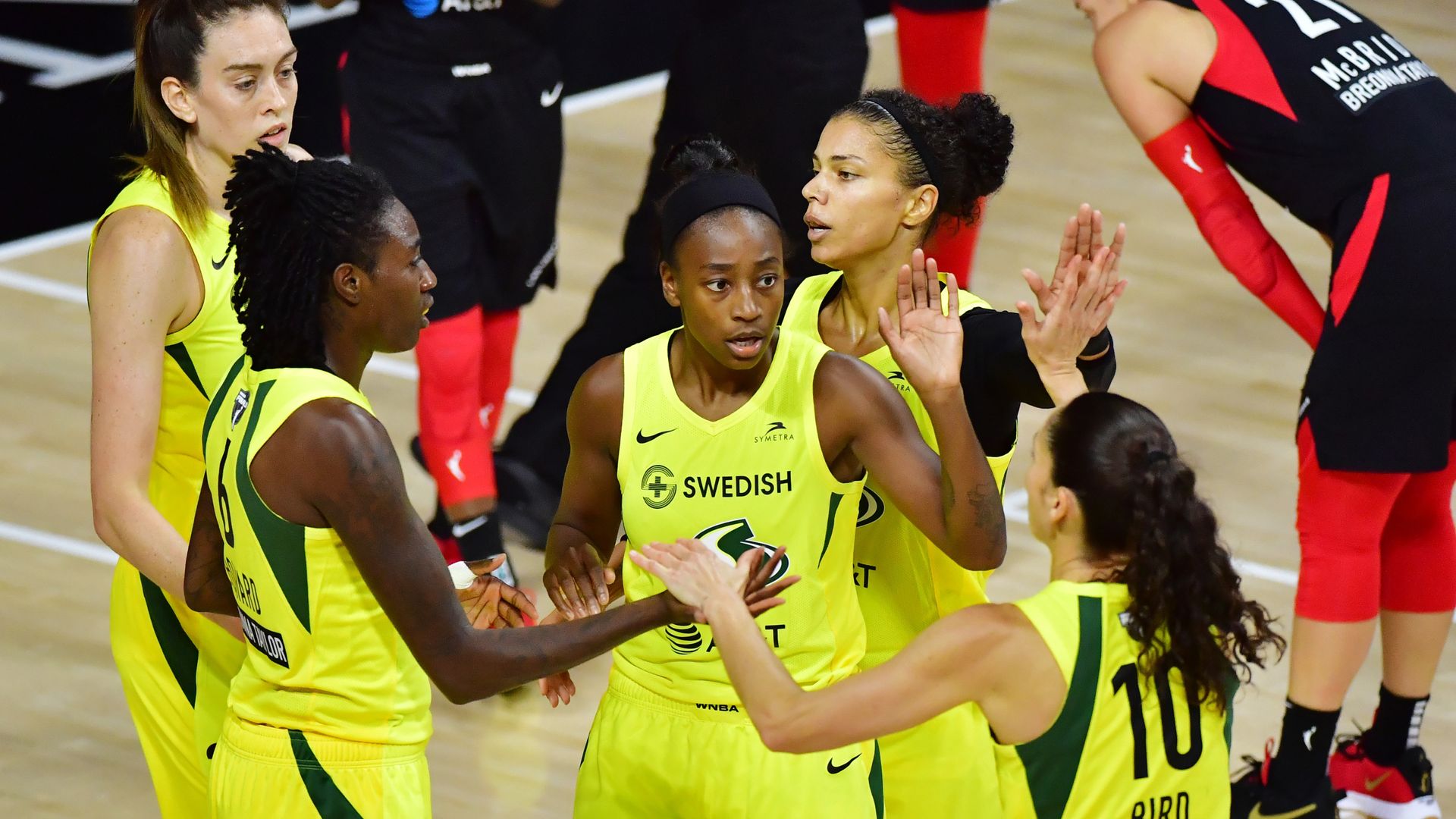 Breanna Stewart top-scored with 22 points as the Seattle Storm produced a balanced offensive performance to rout the Las Vegas Aces in Game 2 of the WNBA Finals.

Stewart and a record-setting unselfish offense have Seattle on the verge of another WNBA championship. Stewart scored 22 points to lead five Storm players in double figures in a 104-91 victory over the Las Vegas Aces on Sunday in Game 2 of the best-of-five series.

The Storm will try to win their second title in three years in the early hours of Wednesday morning (12am), live on Sky Sports Mix (Ch 416).

”This is our moment to really finish the series and take home the championship,” Stewart said.

”Stay in the moment. They are good. The score doesn’t indicate it,” said Sue Bird, who ran the show on all three of the Storm’s title wins.

Two days after she set the WNBA Finals and playoffs record with 16 assists, the 39-year-old guard had 10 to go along with 16 points. The team had 33 assists to set a WNBA championship-round record.

”Having high assists isn’t abnormal for us. Thirty-three is amazing, goes to show the unselfishness of everyone on the floor and the confidence we have in one and another,” said Alysha Clark, who added 21 points. ”Pass up a good shot to get a great shot. When you do those things, 33 assists happen, wow.”

Natasha Howard also had 21 and Jordin Canada added 10 off the bench to go along with Stewart, Bird and Clark’s double-digit effort.

”Our performance today was better than Game 1 having a balanced approach,” Stewart said. ”Game 1, ‘Piph’ (Epiphanny Prince), Jewell (Loyd) and I were the only ones in double figures. It was more balanced when we needed it.”

The Storm took over after Las Vegas had rallied from a 13-point deficit in the first half to take a 65-64 lead with 3:22 left in the third quarter. Seattle scored 22 of the next 30 points over the next six minutes to go up double-digits again with Jewell Loyd ending the burst with a three-pointer that made it 86-73 with just under seven minutes left. Las Vegas couldn’t respond.

A’ja Wilson had 20 points to lead Las Vegas while Angel McCoughtry and Emma Cannon added 17 each. Cannon provided a spark off the bench for the Aces, who were missing Sixth Woman of the Year Dearica Hamby with a knee injury. The Aces had 15 turnovers to the dismay of coach Bill Laimbeer.

”We are our own worst enemies some times,” he said. ”Our turnovers hurt us badly. They are a fine basketball team and you can’t make those type of blunders against them.”

Laimbeer’s team faced two elimination games against Connecticut in the semi-finals before winning both to reach the championship round. ”Our focus is winning one game,” he said

Trailing by six at the half, Las Vegas made a run to take a 53-52 lead on McBride’s three-pointer early in the third quarter. The Aces led 65-64 with 3:22 left in the period before the Storm closed with a 11-3 burst.

Seattle held a 48-42 half-time lead behind 12 points from Stewart and Clark. The Storm, who had 17 assists on their 18 baskets, built the lead to 13 before Las Vegas rallied to the six-point half-time deficit.