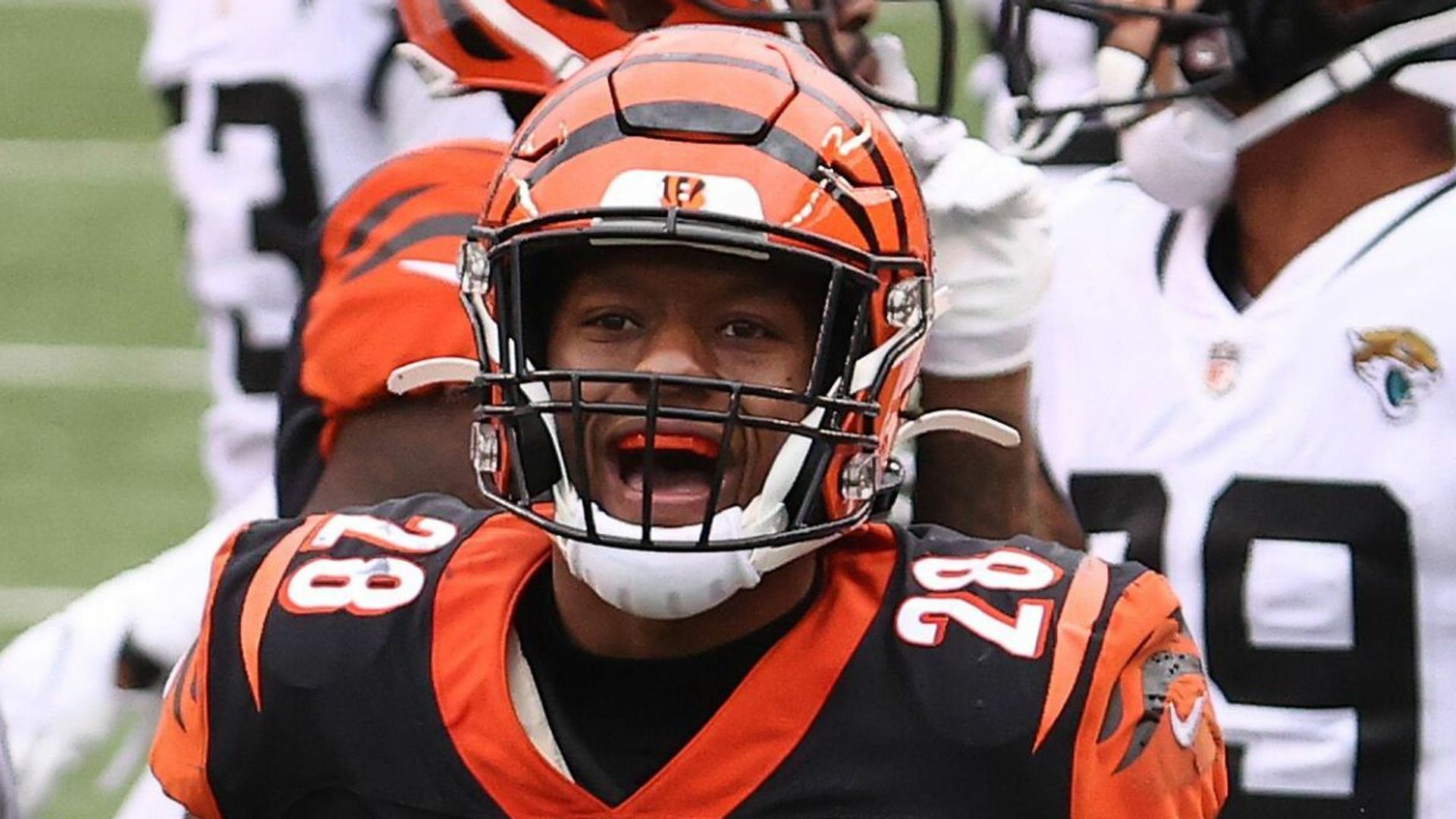 Watch the conclusion of Week Four on Sky Sports NFL on Monday night when Green Bay Packers (3-0) travel to Atlanta Falcons (0-3) – watch live from 1.50am

Bill O’Brien’s problems worsened, Nick Foles struggled as starting quarterback, Joe Burrow chalked up his first win in the NFL and the Philadelphia Eagles somehow finished the weekend top of the NFC East; here’s a look at what we learned from Week Four in the NFL…

In the battle of the youngest QB in the league and the oldest, it eventually went the way of Tom Brady who recovered from an early Pick Six to throw for four more touchdowns (five in total) and 369 yards.

Once again the Chargers found a way to lose, having led 24-7 at one stage, but with rookie quarterback Justin Herbert steering the ship it looks like it will be a lot of fun.

The Bucs defense always looked like it would carry them this season, but Brady and his cast of receivers are gelling quicker than would have been expected. Mike Evans looks like he might be Brady’s Julian Edelman – seven catches for 122 yards and a touchdown means he now has three in his last two games. Paul Prenderville

J.J. Watt is sick of losing. After his Texans slipped to 0-4 on the season, the All-Pro defensive end said: “This is terrible. It’s brutal. I mean, it’s depressing. It sucks. This sucks.”

No arguments there. Particularly when it concerns Houston’s run defense. Dalvin Cook was the latest back in the league to have his way with them, racking up 130 yards and two TDs on 27 carries.

Most were willing to give the Texans the benefit of the doubt for their slow start to the season, putting it down to a cruel joke played by the schedule makers as they started Chiefs, Ravens, Steelers, but the time for excuses is now well and truly over. David Currie

The Saints became the only team to lead by 14 points at half time after trailing by 14 in the first half as they overcame an early scare against the Lions. They did all of that without Michael Thomas, Marshon Lattimore, Jared Cook, Janoris Jenkins or Marcus Davenport.

While Drew Brees had his best game of the season so far, it was the rushing attack that did most of the damage for Sean Payton. Alvin Kamara and Latavius Murray combined for 147 yards and three touchdowns.

With or without Thomas, Kamara and Murray can be a devastating force for New Orleans. If the two of them continue to perform at this level then the rest of league should be put on notice. Sonny Cohen

The serial winner Joe Burrow finally has his first NFL victory and it came off the back of a monster night for Joe Mixon. The former second-round pick rushed 25 times for 151 yards and two touchdowns, adding a further 30 yards on six receptions for another touchdown.

Cincinnati will be hoping that Burrow is their franchise quarterback, but they will need Mixon to continue to play at a high level to slow down the pass rush. It is clear that their best football will be played when they are running the football efficiently and not having Burrow throw the ball 60-plus times. Sonny Cohen

Teddy Bridgewater is playing football, having fun and it’s brilliant to see. You once questioned whether the quarterback would ever become a starter in the NFL again when he tore his ACL, dislocated his knee joint and suffered additional damage during practice with the Minnesota Vikings in 2016. There were even fears he might never walk again.

He is now leading the charge under first-year head coach Matt Rhule and on Sunday drove the Panthers to their second successive win with 267 yards passing for two touchdowns. His day also included a jinking 18-yard touchdown run, marking his first rushing score in almost five years.

The Panthers were far more efficient on offense throughout than in recent weeks, converting seven of 11 on third down as well as their sole fourth down attempt. Cameron Hogwood

That’s more like it, Ravens! After a rough outing last week in defeat to the Chiefs, the Baltimore offense was back to more like its old self as they made light work of Washington.

Lamer Jackson logged the longest rush on his career as he took it 50 yards to the house in the second quarter, while the Ravens QB also became the fastest to reach 5,000 passing yards and 2,000 rushing yards in NFL history, doing so in just his 35th career game. David Currie

This one pretty much went the way we expected, though the Dolphins managed to keep pace with Seattle to make things semi-interesting, but a couple of Ryan Fitzpatrick interceptions proved costly.

Especially when you consider the quarterback he was coming up against on the opposite sideline. There was some more Russell Wilson magic – 360 yards and two TDs – and top target D.K. Metcalf clocked another 100-yard game. David Currie

Two teams with three wins, but is it harsh to suggest only one of these two look like a realistic contender?

It was Indianapolis who claimed a third straight victory, as they continue to grow in stature after a Week One defeat to Jacksonville. It’s not been pretty, but it’s been effective and it’s been the defense doing most of the hard work as their development goes from strength-to-strength.

Frank Reich will want to see a little more fluidity from his offense, who are not quite firing under new quarterback Philip Rivers. And while we are on the subject of quarterbacks, Foles starting for Chicago but he couldn’t get going.

Foles has made his name by filling in but the onus is going to be on him to lead this Bears team, whose offense again looked one-paced. Paul Prenderville

Run the ball with Daniel Jones. Outside of their second-year quarterback and Wayne Gallman’s 26-yard burst, the Giants’ run game was non-existent against the Rams.

Jones led the team with 45 yards from six carries, but again Jason Garrett appeared reluctant to exploit his ability on the ground with designed quarterback runs.

The 23-year-old took off through traffic and put a spin move on a defender to move the chains and keep the Giants alive late in the fourth quarter, before neglecting the chance to punch a gaping hole for a first down on the ensuing drive and instead throwing a decisive interception on a pass intended for Damion Ratley.

This Giants defense can only keeps its offense in the game for so long. Regardless of the multiple injuries, Garrett has to be more creative with his unit. Jones, meanwhile, has to cut down the turnovers, and quickly.

Somehow the Eagles top the NFC East, despite this being their first win of the season. They found a way to win, and that hasn’t always been their strongest suit.

Carson Wentz still didn’t quite look right, but a much improved showing on defense helped keep San Francisco – George Kittle aside – quiet. The NFC East is wide open with Washington and New York Giants looking among the worst teams in the early stages of this season.

Much was expected of the Cowboys, but they’ve lost three of their four games, so it’s all there for Philadelphia who may look back on this win as a turning point. Sometimes it’s just about getting the win.

The 49ers will feel they should have, but Nick Mullens showed why he is the back-up with a disjointed showing, but Brandon Aiyuk and the returning Kittle showed that San Francisco and Kyle Shanahan still have plenty at their disposal despite their injury ravaged start to the year. Paul Prenderville

The Bills could be the real deal. They currently sit at 4-0. The Los Angeles Rams may be the only team they have faced with a winning record, but Josh Allen has been a superstar. Completing 71.1 per cent of his passes for 1,038 yards, 10 touchdowns and one interception.

Against the Raiders, Allen left the game with an injury to his non-throwing shoulder in the second quarter. By that time he had already racked up 152 passing yards and two touchdowns. Despite going to the locker room, he returned to the game to help lead the Bills to their fourth straight win to open the season.

Allen has been able to spread the ball around so far this season as well, with Stefon Diggs, John Brown, Gabriel Davis and tight end Tyler Kroft all picking up two receiving touchdowns each so far this season. Sonny Cohen

Mike McCarthy was brought in to make the offense hum and he is doing that but the defense has woefully underperformed and a usually stout Dallas offensive line has wilted when it matters.

Once again Prescott found himself under pressure early as Myles Garrett caused all sorts of problems, and while Dak recovered for a 500-yard, four touchdown day at the office, the Browns – despite their best efforts to throw it away in the fourth quarter – were far enough away to hold on.

In contrast Cleveland looked an altogether more polished team with a plan – run the ball, to the tune of more than 300 yards. It also helps when Odell Beckham returns to being Odell Beckham with three touchdowns for the first time since 2015. Paul Prenderville