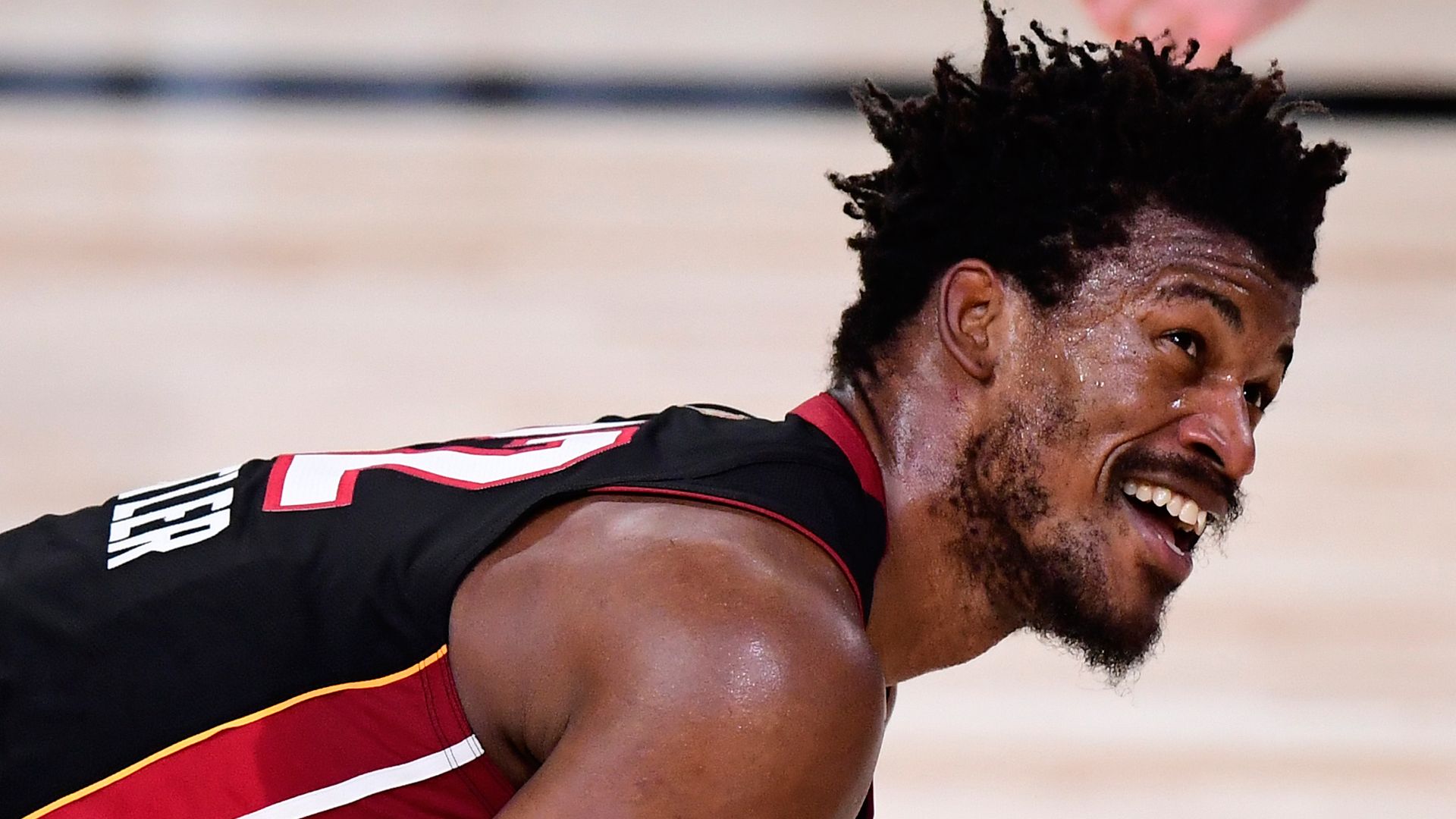 Jimmy Butler played the best game of his career in Game 3 of the NBA Finals and his 40-point triple-double has given the Miami Heat new life.

It is not a particularly widespread practice, yet every so often, certain athletes get rewarded with something far more complimentary and everlasting than money or applause.

Sometimes, it’s a candy bar or sandwich or another product named after them, or maybe a mention in a hit song, or most commonly, a game. Not a game that’s compatible with Playstation. Like, a real game.

Jimmy Butler just had a game.

On October 4 in the very complicated year of 2020, inside a shoebox of an arena on the Disney campus, when everyone tuned in expecting more of the same in the lopsided Finals, the ‘Jimmy Butler Game’ happened. That is what Game 3 of the 2020 NBA Finals will be called. It was real and it was spectacular.

For all but two minutes and 14 seconds of Game 3, the Lakers felt and the Heat enjoyed the total ‘Jimmy Butler Experience’. There was energy from him, chilly composure, plenty of buckets of course, leadership and then a sly and sinister message near the end of his masterpiece when he snarled as he returned a taunt that LeBron James gave him in the first quarter: “You’re in trouble.”

Not sure if LeBron heard it, or if the Lakers even believe it, but that is really beside the point. Common sense says the Lakers will or should eventually own this series in which they still lead 2-1, but on Sunday night, if he does nothing else from here, Butler took ownership of His Game.

With a pair of important starters missing their second straight game for the Heat, Butler basically replayed a sequel to his famous Timberwolves Moment when he took the Minnesota scrubs and beat the starters in practice to demonstrate his desire and toughness.

From a statistical standpoint, Butler was never known as a volume guy in his career, or ever classified as a superstar by the strictest of definitions, but this was a dire situation facing Miami – Butler put the “ball” in ballistic on Sunday.

Performances like Butler’s 40-point triple-double are rightly described as legendary when they happen in the championship round. Butler upped that ante by doing it without Bam Adebayo and Goran Dragic. With his short-handed team down 0-2 in the series, he became the first player to outscore, out-rebound and out-assist LeBron in a Finals game – all while also guarding LeBron.

“We won,” Butler said. “I could care less about triple-doubles. Glad my team-mates had faith in me to hoop like that. I care about the win.”

“I’m ready for this,” Butler said. “This is the biggest stage.”

He certainly made a fan of LeBron, who called Butler “one of the best competitors we have in this game.”

Perhaps most impressive is how Butler was so efficient. He took only 20 shots, just two more than team-mate Tyler Herro, yet Butler made 14 by employing some old-school flavour. He commanded attention and respect. He scored off the bounce, isolated by backing his man in the paint, drew enough contact to take 14 free throws (making 12), stuff you rarely see in a league that is heavily slanted to a three-point-shot-or-lay-up mentality. Butler did not even attempt a three in 45 minutes.

Also, he involved his team-mates by drawing double-teams and creating shots for them, which of course only endeared him even more in the Miami locker room.

“We know how Jimmy is in these moments,” said Herro. “He did everything obviously, made play after play, bucket after bucket, defensively guarding LeBron, just being a leader out there, and we’re all following him. He just wants to win. He knows what it takes to win.”

Butler was a curious choice, at least from an outsider’s point of view, for Miami when the club went hunting for a centrepiece last summer and he was a free agent. Butler’s previous stints in Chicago, Minnesota and Philadelphia were not all ice cream and sweetness. He rubbed some the wrong way – all in the name of competitiveness, he insists. Team-mates were not broken up to see him leave. Butler, though a five-time All-Star, has only made one All-NBA Team (third) and is not blessed with otherworldly physical gifts or ‘unicorn’-like skills.

But Miami sensed what basketball purists knew: Butler is a competitive savant. Dwayne Wade, the best player in franchise history, sold Butler on Miami (“this is your guy, this is the next guy” he told Spoelstra) and vice versa. Here, in their first year together, they have reached the pinnacle of a somewhat unexpected ride for the player and No 5-seeded team.

“This is why we pursued Jimmy very aggressively,” said Heat coach Erik Spoelstra. “We were able to build a culture and surround a team around him. He’s an elite top percentile competitor.”

You must understand the pickle Miami found themselves in on Sunday. Adebayo is nursing an injured shoulder and Dragic has a faulty plantar issue, and that erased a needed defender and a scorer from the line-up. Plus, LeBron and Davis did a tag-team number on Miami the first two games. Finally, no team has rallied from 3-0 down in any NBA playoff series. Losing Game 3 meant Miami could start packing their bags.

But Game 3 presented Butler with a challenge and a chance to show the basketball universe what he brings to the conversation.

“This is what he wanted, what we wanted,” said Spoelstra. “It’s really hard to analyze and describe Jimmy until you feel him between the four lines. We needed it. He was doing it on both ends, putting his imprint on every part of the game. He got stronger as the game went on.”

Yes, Butler never wilted from the moment or the urgency or pressure or burden. He kept asking for the ball and the chance to be a saviour and the opportunity to extend this series beyond Game 4 on Tuesday night. Butler was not letting LeBron or Davis or anyone steal this night from him or remove his name from this game.

“It’s so settling to have that type of guy in a very competitive game like this,” said Spoelstra.

Meanwhile, the Lakers proved they are not immune to the occasional stinker, and they definitely left a scent. Davis fought through fouls in the first three quarters yet turned meek in the fourth. His impact was a quiet 15 points and five rebounds. LeBron once again flirted with a triple-double but at no point was he superior to Butler. Other than flashes from Kyle Kuzma and Markieff Morris, the Lakers were mild.

“This was our game and we let our foot off the gas,” said Kuzma.

Uh, actually, this was never your game. This game was already taken.

LeBron added: “I don’t feel like we’re concerned. We’re not concerned. We know we can play a whole lot better.”

This much is true, and maybe Butler was sounding more hopeful than anything else when he got puffy-chested following the win and began to gloat.

“LeBron has gotten the best of me way too many times,” Butler said. “But this is a different time now, different group of guys around me. We’re not going to lay down. We’re going to fight back into this and get to 2-2.”

In a best-case scenario for the Heat, they will get at least one missing player back in uniform for Game Four – most likely Adebayo – and surf this feel-good moment for at least another night.

Understand that when a series is extended, that is one more game for something to go terribly wrong for the heavily-favoured team. That, more than the Heat, is the biggest issue confronting the Lakers.

But that is for another day. For today, and until the ball goes up again in this series, it’s His World, or more specifically, His Game. If you did not know his name before Sunday, now you know.

“Jimmy effin’ Butler,” said Spoelstra, with emphasis on the second of those three words.