Top Rank promoter Bob Arum has been putting on fights for 54 years and seen many classics.

After watching the junior welterweight war between former world title challenger Jose Zepeda and former world titlist Ivan Baranchyk that Top Rank promoted on Saturday night from the bubbles inside the conference center at the MGM Grand in Las Vegas, Arum could not stop raving about what is so obviously the clear leader for 2020 fight of the year honors, putting into the pantheon of great fights he has promoted. 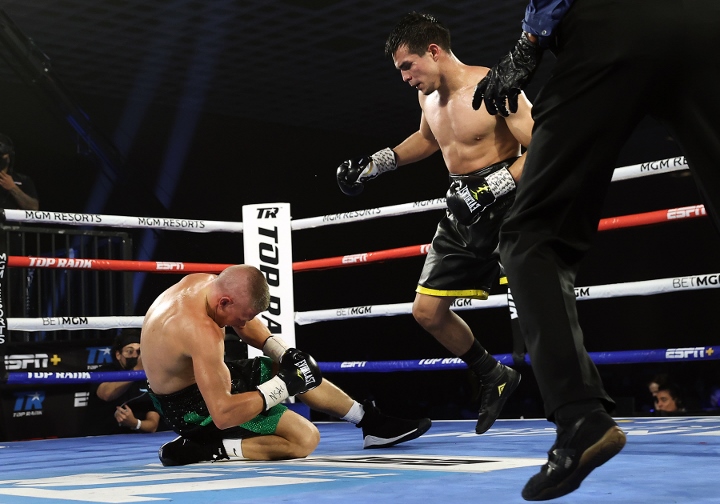 Arum watched from his home on ESPN+, one of the few fights he has missed in person since Top Rank brought televised boxing back in June for the first time since the coronavirus pandemic shut down the sports world in March.

“It was amazing, like you almost couldn’t believe it,” said Arum to BoxingScene.com.

“For example, in that (fifth) round where Baranchyk knocked Zepeda into the ropes and they counted and Zepeda gets off the ropes and knocks him out. I mean give me a break! (My wife) Lovee was watching it with me and she couldn’t believe what she was watching.”

What they saw, as well as everyone else who was tuned in, was one of the wildest fights of recent decades. It was filled with momentum swings and knockdowns in every round.

There were eight total knockdowns with each man getting dropped four times apiece en route to Zepeda scoring the final knockdown with a clean left hand to Baranchyk’s chin that badly knocked him out at 2 minutes, 50 seconds of the fifth round. Referee Kenny Bayless did not bother to count as Baranchyk, whose right leg was folded underneath him, went down hard and slammed his head on the mat. Moments before Zepeda ended the fight, Baranchyk had sent him careening into the ropes with a huge left hand that was ruled a knockdown because the ropes held him up.

“I hadn’t seen anything like that since the (George) Foreman-(Ron) Lyle fight,” Arum said, referring to the legendary heavyweight fight in Las Vegas that was named the 1976 fight of the year, one Arum did not promote but in which Foreman and Lyle traded several knockdowns in an all-out brawl before Foreman won by fifth-round knockout.

“I have never seen anything like this,” Arum said of Zepeda-Baranchyk. “Even Foreman-Lyle wasn’t as dramatic. One guy would knock the other guy down and then out of nowhere a punch would come and he would get knocked down. I mean it was the most incredible thing. These were not easy knockdowns. You thought the fight was over because of these knockdowns.

“Every time you thought the fight would be over one way, something happened to reverse it. I mean who would have given Zepeda any kid of shot after the first round? He had been decked twice. He didn’t look anywhere near as strong as Baranchyk. And then for him to rally the way he did and knock the guy down, it was unbelievable. You were on the edge of your seat.”

Not only is Zepeda-Baranchyk the top fight of the year candidate as well as the fifth round being a round of the year contender, Arum also thinks it has a great chance to win knockout of the year honors, although heavyweight Alexander Povetkin’s one-punch destruction of Dillian Whyte on Aug. 22 could give it a challenge.

“How could that not be the knockout of the year? Nothing as dramatic as a guy getting knocked down, getting up, hitting the guy with two punches, finishing him off and the guy looked dead,” Arum said. “I was very concerned. The guy looked dead.”

Baranchyk (20-2, 13 KOs), 27, who is from Russia and fights out of Miami, Oklahoma, was down for several minutes and eventually taken to the hospital as a precaution. He stayed overnight but manager David McWater told BoxingScene that he was OK and released on Sunday. McWater said Baranchyk, whose only other loss came when Josh Taylor took his world title by decision in a unification fight in the World Boxing Super Series semifinals in May 2019, would likely take off at least six months.