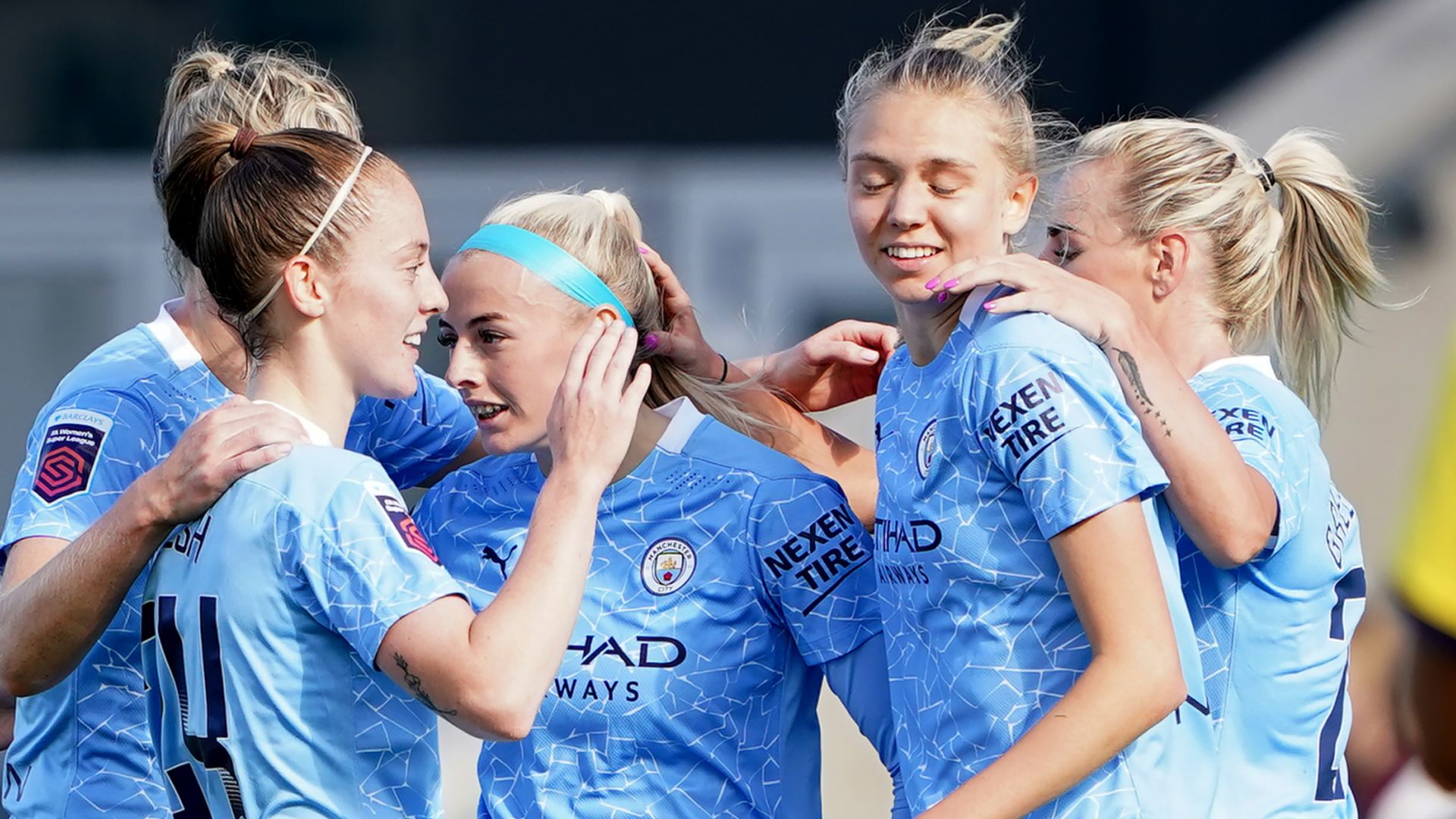 In a dominant first-half display from City, White’s effort crashed off the crossbar before Mewis saw her shot rebound away from the far post.

Kelly opened the scoring with a stunning strike as she received a pinged cross from Steph Houghton, shifted onto her right foot and curled a shot into the back of the net in the 33rd minute.

The goal was not without controversy, though, as Tottenham were left frustrated over City’s decision not to kick the ball out of play after Siri Worm went down in the build-up to Kelly’s goal.

Goals from Jordan Nobbs, Caitlin Foord and Vivianne Miedema saw Arsenal come from behind to beat Bristol City 3-1 and leave their visitors rooted to the foot of the WSL table.

Arsenal’s hopes of keeping a clean sheet were short-lived as Scotland international Abi Harrison pounced on a loose ball at the back six minutes into the game.

The home side struggled to break through Bristol’s defence for most of the first half but three minutes before the break, Nobbs equalised with a powerful strike from the centre of the box.

Australia international Foord put the Gunners ahead after getting on the end of Beth Mead’s bouncing cross in the 50th minute.

Last season’s Golden Boot winner Miedema got on the scoresheet with her close-range strike four minutes before the final whistle to wrap up the points.

Fran Kirby’s first-half header earned Chelsea a 1-0 victory over Birmingham. The clash saw the meeting of two teams who were both knocked out of the Women’s FA Cup by Everton in the last week.

Chelsea scored the only goal of the game with a cushioned header from striker Kirby in the ninth minute. Later in the opening half, a Guro Reiten effort rattled off the bar.

After the break, Carla Ward’s side showed a resilient defensive performance to keep themselves in the game, with Harriet Scott clearing off the line and home goalkeeper Hannah Hampton making a series of comfortable saves.

The hosts’ only chance at Damson Park came in the 82nd minute when Claudia Walker’s header sailed just wide.

Chelsea forward Bethany England missed a fantastic opportunity to score and Pernille Harder, who won the 2019-20 UEFA Women’s Player of the Year Award in the week, came on in the 77th minute but could not add to Chelsea’s lead.

Manchester United made it back-to-back wins in the WSL with a 3-0 triumph over Brighton.

After opening their campaign with a 1-1 home draw against Chelsea, United were convincing winners at Birmingham before extending their unbeaten run against the Seagulls at Leigh Sports Village.

United gained an early advantage with a ninth-minute penalty from Ella Toone following a foul on team-mate Alessia Russo by Maya Le Tissier.

The Red Devils then doubled their lead in the 69th minute, when Russo slotted beyond Megan Walsh at the end of a determined solo run.

And United completed a convincing victory in stoppage time thanks to a headed effort from Jane Ross, assisted by Tobin Heath on her debut.

Lauren Bruton scored the only goal of the game as Reading claimed a 1-0 win over West Ham.

The visitors made the breakthrough in the 25th minute as Natasha Harding whipped in a cross from the right which Bruton poked home.

West Ham, sporting a limited edition pink kit for Breast Cancer Awareness month, had the opportunity to equalise 15 minutes into the second half when Rachel Daly was brought down in the box by Royals goalkeeper Grace Moloney.

Kenza Dali stepped up but Moloney made amends, diving down to her left to make the save.