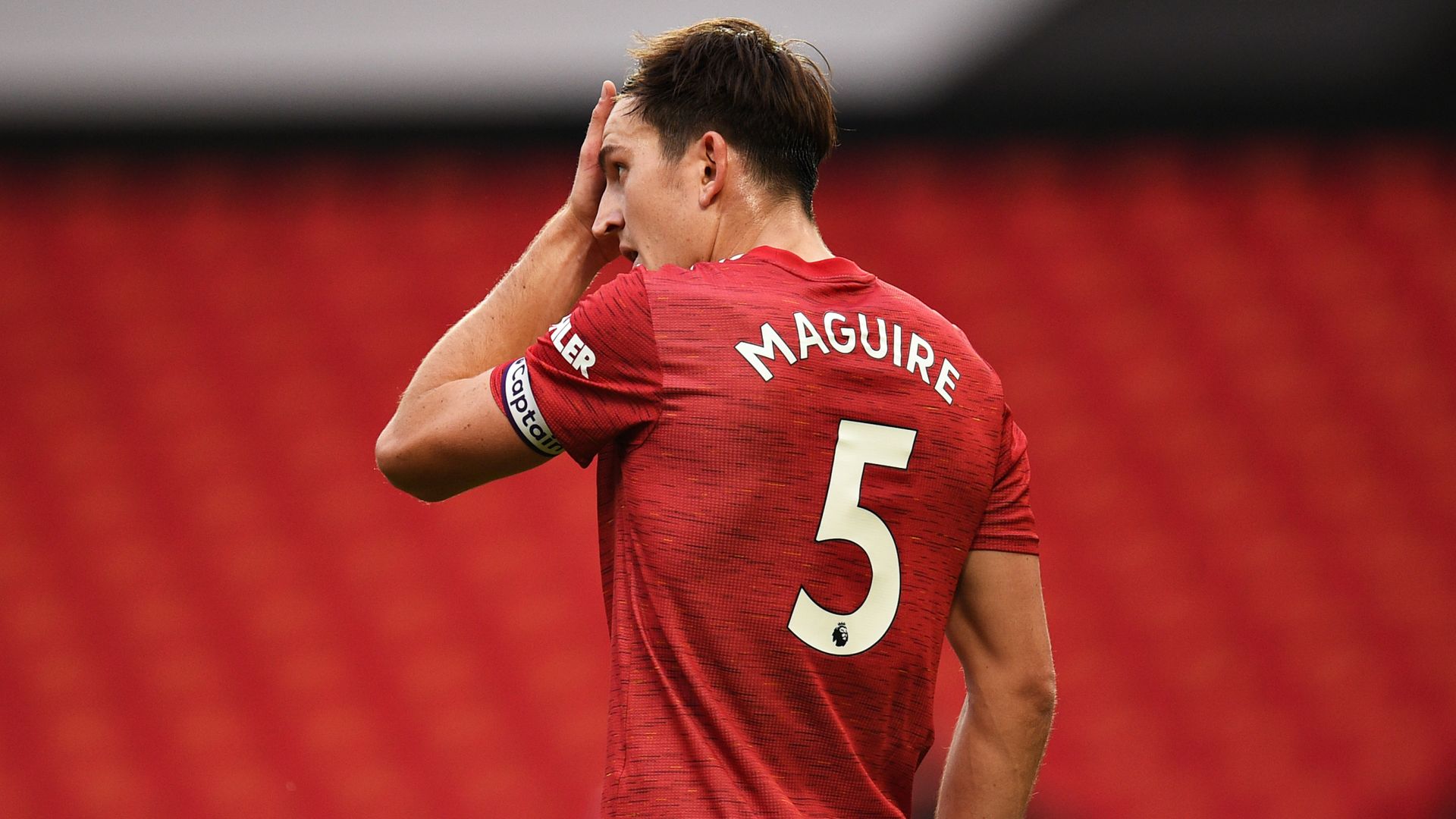 Tottenham subjected 10-man Manchester United to an embarrassing 6-1 thrashing at Old Trafford on Super Sunday. Here, we rate the players from both sides.

Not as bad as the defenders in front of him but this was another horrible afternoon for the under-fire goalkeeper. He was beaten far too easily at his near post for Tottenham’s fourth, scored by Son, and it hardly reflected well on him that he conceded six goals from only eight shots on target.

Had an extremely difficult afternoon up against the rampaging Son. A reliable performer for much of last season but lacked alertness here and was found wanting for several of Tottenham’s goals.

A hapless performance from a once reliable performer. Maguire’s errors in the lead-up to Tottenham’s equaliser set the tone for his afternoon. He conceded the free-kick which led to Tottenham’s second just three minutes later and never recovered.

Ole Gunnar Solskjaer talked him up as a possible solution to United’s recent defensive struggles ahead of this game, but Bailly was a liability here. Dreadful for Tottenham’s first two goals and gifted them their third with a loose pass in his own box. Positionally all over the place throughout.

News of the imminent arrival of left-back Alex Telles from Porto will be welcomed by supporters after this display from Shaw. The 25-year-old was dragged out of position throughout and switched off at key moments repeatedly. Perhaps fortunate not to be sent off for hacking down Lucas Moura late on.

Not helped by the lack of discipline around him but struggled with the pace of the game and could not keep up with Tottenham’s runners. Did not make a single tackle or interception before being hooked at half-time.

A miserable afternoon for the Frenchman. Unable to make anything happen offensively and did not contribute nearly enough defensively. Allowed his frustration to get the better of him when he clattered into Ben Davies to concede the penalty for Tottenham’s sixth.

Typically reliable from the penalty spot for United’s early goal but that moment felt like a distant memory by half-time, when he was substituted for Fred as Solskjaer attempted – in vain – to shore up his midfield.

Not the kind of game in which a teenage winger can be expected to make much of an impact. Had little influence on proceedings before being replaced by Donny van de Beek in the second half.

A bystander for most of the game, Rashford was starved of service and did not have a single shot on goal. Offered little protection to Shaw at left-back.

Won the penalty for United’s early opening goal but that was as good as it got for him. It was perhaps unfair that Erik Lamela was not also red carded after the scuffle which saw him sent off, but Martial could have few complaints with the decision.

Brought on to shore up the midfield but struggled to adapt to the speed of the game.

Like Fred, he was unable to provide any improvement in United’s midfield.

Not his kind of game. A peripheral figure after replacing Greenwood.

Unable to stop Fernandes’ early penalty but had little to do apart from that – apart from sit back and enjoy the performance of his outfield team-mates.

Selected ahead of summer signing Matt Doherty at right-back and justified his inclusion with a goal and an assist. Rarely tested in a defensive sense, but caused constant problems at the other end, showing just how dangerous he can be on the overlap.

It was his clumsy foul on Martial which allowed Fernandes to put Manchester United ahead early on, but he regained his composure soon enough and his early error was long forgotten by the end.

What should have been a difficult afternoon for him at centre-back turned out to be a relatively easy one. Never looked troubled by United’s attackers and completed 78 of his 81 passes over the course of the 90 minutes.

Did not catch the eye quite as much as Aurier on the opposite flank but this was an extremely encouraging Premier League debut nonetheless. Created a string of scoring chances from left-back and showed a willingness to run at his man.

Set up Tottenham’s fourth goal with the pass to release Aurier on the right flank and dominated the midfield throughout. Nobody had more touches or completed more passes. Hojbjerg also ranked joint-top among Spurs players for ball recoveries.

Like Hojbjerg, he was instrumental in ensuring that Tottenham maintained midfield dominance throughout. Worked tirelessly defensively and offered plenty of composure with the ball, completing 67 passes out of 69, giving him the highest accuracy rate on the pitch.

His future at Tottenham has looked in doubt at times under Mourinho but it seems Ndombele is finally winning his manager over. In the right place at the right time to score the opening goal and continued to impress before making way for Dele Alli midway through the second half.

Mourinho will have liked his role in Martial’s sending off having asked his players to show a dark side. Lamela was typically industrious in the first half but replaced by Lucas Moura at the interval having been fortunate not to have also seen red in his clash with Martial.

Another outstanding performance from a player who has started the season in blistering form. Finished his two goals brilliantly, taking his tally for the season to seven in all competitions, and also provided the assist for Kane’s first.

Like Son, he was sensational. Showed impressive awareness to set up the South Korean’s first goal with his quickly-taken free-kick and there were plenty more examples of his passing prowess. Took his goals superbly and took home the man-of-the-match award too.

Not hugely involved after replacing Lamela at the interval but worked hard.

A first Premier League appearance since the opening day, suggesting there may be a route back into Mourinho’s plans for him.

Won the penalty for Tottenham’s sixth goal when he drew a foul from Pogba.