Ryan Kielczewski caught Gabe Flores Jr. with a left hook in the first round Saturday night that made it seem as though the underdog had a shot to pull off an upset.

Kielczewski couldn’t do it again over the remaining nine rounds.

The 20-year-old Flores fought through that shot, quickly regained control and out-worked Kielczewski throughout their 10-round lightweight fight at MGM Grand Conference Center in Las Vegas. Flores (19-0, 6 KOs) worked well off his jab, defended himself effectively and was much more active than Kielczewski (30-5, 11 KOs) on his way to winning a unanimous decision on the Ivan Baranchyk-Jose Zepeda undercard. 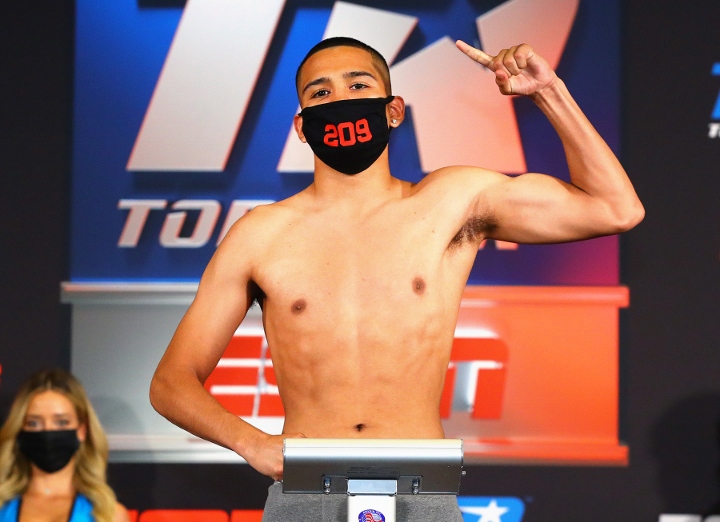 Flores, of Stockton, California, has gone the distance in six straight fights. The 31-year-old Kielczewski, of Quincy, Massachusetts, has not been knocked out in 12 years as a pro.

Kielczewski landed a stiff jab about a minute into the ninth round. The remainder of the ninth round and the 10th round unfolded like much of the rest of their fight – with Kielczewski following Flores around the ring, and Flores occasionally connecting with jabs and right hands.

A right-left combination by Kielczewski made Flores move backward with 30 seconds to go in the eighth round.

Kielczewski and Flores traded hard lefts to the body at the midway mark of the sixth round. Flores fired a combination that stopped Kielczewski in his tracks with a minute remaining in the sixth.

Kielczewski’s jab snapped back Flores’ head with about 50 seconds remaining in the fifth round.

Flores landed a stiff jab about a minute into the third round. The young prospect moved well throughout that round and threw many more punches than Kielczewski.

Flores worked well off his jab throughout the second round. He also bloodied Kielczewski’s nose in that round.

Kielczewski rocked Flores with a left hook that made him stumble backward him with 1:10 to go in the opening round.