BOXXER announced that UB7 will make its return behind closed doors with a never seen before, one night, four man knockout competition and a stacked card. The undercard will also feature recently signed UB Champions, a huge professional debut and an Albanian superstar.

UB7, in association with Betfred and Lucozade, will be on Tuesday 10th November LIVE from the BT Sport studio in Stratford for a special Tuesday Night Fight Night with the debut tournament in the super-middleweight division.

In an exciting development, UB7 will be presented around a four-man competition format. This will comprise of two semi-finals and a final, all in one night – for the first time ever. The winner claiming the Golden Robe and the lions share of the prize money. 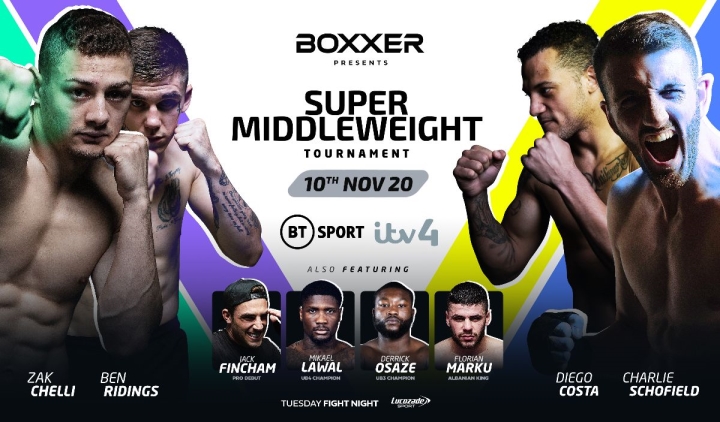 Some significant changes for the new Millennial boxing brand in the four-man 168-pound square-off with the following line-up:

Zak Chelli (7-1-1, 3 KO’s) Joint youngest in the tournament at 22 but has crammed in plenty of ring experience in just three and half years of pro action with nine fights and 52 rounds plus a Southern Area title.  He’s pulled off a few shocks previously by beating unbeaten prospect Umar Sadiq and dropping contender Kody Davies.  He’s the bookies favorite off the back of his highly questionable draw with Jack Cullen at Matchroom’s Fight camp last time out as the away fighter.  He’s hungry for the win and then onto a rematch with Cullen.

Diego Costa (7-0-0, 5 KO’s) Regarded as the most avoided man in the division but there is no home corner in this competition. The Boy From Brazil brings sizzle and salsa when he fights! From Recife, Brazil, and fighting out of Fallowfield, Manchester, Costa is the puncher in the pack with five KO’s in seven fights to earn his nickname ‘Dynamite’.  Costa will have the benefit of being trained by former Prize Fighter winner Martin Murray who is familiar with the tournament format.  He’s the oldest at 34, but the most dangerous and with explosive packed fists can end a fight at any second.

Charlie Schofield (15-1-0, 1 KO) At 6ft 3in, Schofield is the tallest boxer in the line-up and has been dubbed the ‘Manchester Giant’.  The 27-year-old has accumulated the most ring experience with 87 rounds in 16 fights, including an English title challenge in his last fight. He’ll be looking to impose his size and ring savvy to victory.

Ben Ridings (3-0-0) The up-and-coming 22-year old from Bury turned pro in 2018 and is undefeated in his three fights with twelve rounds.  Being an unknown quantity means he’s got nothing to lose and is confident of pulling off the biggest shock on the night.  Ridings is the youngest competitor and is an outsider, but will rely on his youth and desire to overcome his rivals’ age and experience.