Andrew Moloney looks for a more memorable stateside adventure the second time around.

The first career fight in the United States for the 29-year old Australian resulted in his lone career defeat and the end to his secondary junior bantamweight title reign. Moloney suffered a 12-round unanimous decision defeat to Joshua Franco in their June 23 ESPN headliner from. The Bubble at MGM Grand in Las Vegas.

Less than five months later will come their contractually enforced rematch, likely at the same venue as Moloney is eager to make the most of a second chance at a lasting impression.

“I’m really excited to be heading back to America to reclaim what is mine,” Moloney told BoxingScene.com prior to departing from Sydney to the United States. 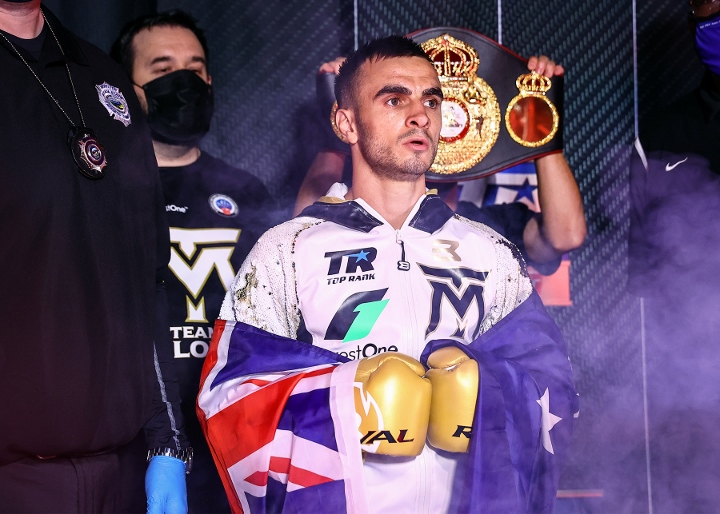 As was the case earlier this year, Moloney will be joined by twin brother Jason (21-1, 18KOs) as both enter the biggest fights of their respective careers. Both appeared on separate ESPN cards two days apart in June. Andrew Moloney’s points loss to Franco was followed by Jason Moloney—a top-rated bantamweight contender—scoring a one-sided 7th round stoppage of Leonardo Baez on June 25, marking his first win in the U.S. coming on his second try. Jason Moloney dropped a hard-fought split decision to then-unbeaten Emmanuel Rodriguez in the quarterfinal round of the World Boxing Super Series bantamweight tournament, with their October 2018 fight taking place in Orlando, Florida.

The Moloney twins—who are managed by Tony Tolj—have since signed a promotional pact with Top Rank, enjoying three fights each under their banner. The relationship was truly consummated in their respective Vegas appearances in June, now returning stateside for the second straight time.

On paper, Jason is believed to have the far more daunting task of the two as he faces unbeaten three-division and reigning unified bantamweight titlist Naoya Inoue on October 31, live on ESPN+ from The Bubble.

Two weeks later, Andrew seeks to avenge his lone career defeat. His rematch with Franco comes in supporting capacity to unbeaten three-division and reigning welterweight titlist Terence Crawford in a voluntary title defense versus England’s Kell Brook—likely to also take place at The Bubble, though with Crawford’s hometown of Omaha still being explored as a longshot option.

Regardless of location, the only destination of concern to Moloney is the secondary version of the WBA title returning with him to Sydney.

“I’m extremely grateful that Top Rank have given me this opportunity,” notes Moloney. “I’m doing everything possible to make sure that World Title comes back home with me.”