Queensberry Promotions can today announce that terms have been agreed to stage the highly anticipated Heavyweight clash between Daniel Dubois and Joe Joyce behind closed doors.

The titanic tussle between the two standout British Heavies will now be staged in either late November or early December, with full details to follow shortly.

Hall-of-Fame Promoter Frank Warren was initially sceptical about running the event without fans but has decided that in light of the recent coronavirus developments it is important for both the boxers and the fans that this fight gets made. 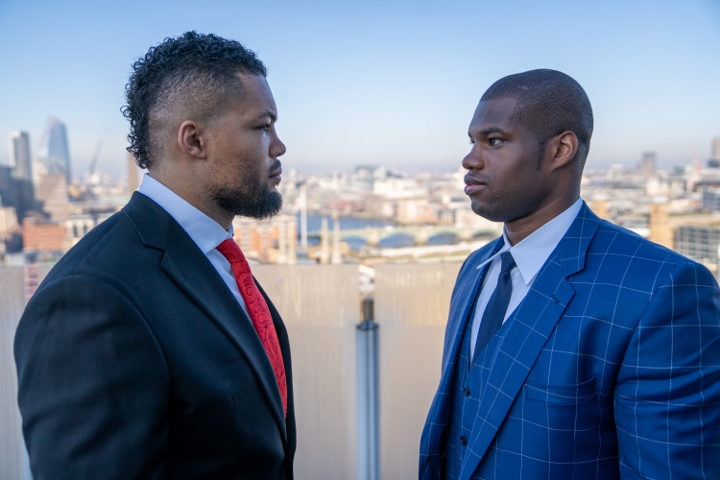 Warren said: “Since the government let us know we couldn’t have an audience present in October I’ve worked day and night to ensure this fight still happens.

“It’s the biggest domestic Heavyweight clash in years and it’s testament to the character of both fighters that they are willing to step up and take the fight on even with all the restrictions and obstacles in their way.

“I’m delighted that Queensberry, BT Sport and the fighters were all willing to come together to make this happen and deliver big time for British boxing fans.”

Daniel Dubois (15-0, 14KO’s) and Joe Joyce (11-0, 10KO’s) are the two British Heavyweights seen as being closest to breaking through to elite level.

Future world title bouts with superstars like Anthony Joshua and Tyson Fury are seen as being within reach for the winner and Warren thinks that that’s what makes the fight so exciting.

“It really is winner-takes-all,” said Warren. “In Daniel, you have a 23-year-old lad who most in world boxing consider to be the hottest young prospect in the Heavyweight division.

“If he can do to Joe Joyce what he’s done to the 15 men that came before him, he’ll be ready to go for a world title in my opinion.

“Joe might be a little older than Daniel, but in my books he’s every bit as exciting a prospect. He has so much more experience than Daniel, as an amateur, that I’d be surprised if he doesn’t go into the fight as many people’s favourite.

“If Joe wins, then he’ll be ready for world titles too.”

23-year-old Greenwich banger Dubois shares his promoters assessment that the winner will go on to fight for a world title, but is less willing to see the potential for a Joyce victory.

“Nothing’s changed from February when I first said I’d knock Joe out. It’s a tough fight, he’s a good fighter, but I’m looking to deliver another devastating performance and move on to fight for a world title.

“I’m just glad we can finally get it on. I know we’ve both been looking forward to it and I’m sure the British public are just as excited as we are for us to finally fight.

“Joe is going to find out just how explosive Dynamite really is.”

For his part, 35-year-old ‘Juggernaut’ is equally bullish about his chances for victory and concurs with his younger opponent’s view on what fans can expect from the scrap.

“The fight is finally on and I can’t wait to get my hands on this guy,” said Joe. Echoing Dubois’ sentiment, he added: “It’s going to be an explosive night.”

The rescheduled bout represents the final chapter in a saga that has seen previously arranged dates in April, July and now October cancelled because of the coronavirus pandemic.

Though today’s announcement is short on the usual details, Warren was adamant it was important to clear up confusion for ticket holders who had previously purchased tickets for the event.

“Of course I’d like to come out with all the venue and date details ready to go”, Warren said. “But the reality is, the situation is moving so fast we don’t have everything 100% confirmed.

“But the one thing we do have confirmed is that this fight will happen behind-closed-doors either in late November or early December. That means the event in October is cancelled and all ticket holders should get a refund from their ticket agent.”

Whilst obviously disappointed that fans can’t be present for such an attractive match-up between two of his flagship fighters, a characteristically upbeat Warren was keen to see the bright side.

“This is the most exciting prospective fight in all of boxing right now. So let’s get it on for the fans.”