Xander Zayas spent his final moments as a 17-year old in style.

The highly-touted welterweight prospect made quick work of Orlando Salgado, scoring a 1st round knockout in their Telemundo-televised clash Friday evening at Osceola Heritage Park in Kissimmee, Florida.

Zayas scored the bout’s lone knockdown, a laser-like right hand at the tail end of a three-punch combo which floored Salgado and prompted an immediate stoppage. 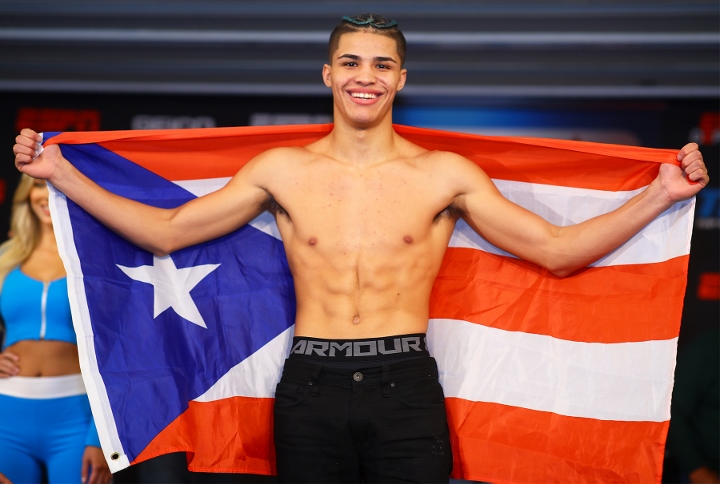 The night marked the first ring appearance for Zayas since this past February, having managed four bouts in as many months to start his pro career before the ongoing coronavirus brought the sport to a grinding halt. With it came a gap of more than six months between fights for the recent high school graduate, with Friday’s affair coming on the eve of his 18th birthday.

Zayas was never a risk to squeeze in one last victory prior to that milestone in his young life. Salgado—whose lone career fight prior to Friday was a first-round knockout win—saw fit to take the fight directly to the blue-chip talent. Zayas obliged, remaining patient and pumping a purposeful jab in the grill of his foe.

The bout only grew even more lopsided. A left uppercut by Zayas had Salgado in bad shape, remaining poised in picking apart the Colorado-based welterweight. A series of jabs and right hands had Salgado (1-1, 1KO) in trouble, with a final straight right against the ropes forcing him to collapse to the canvas.

No count was necessary with the fight waved off immediately upon impact.

Zayas cruises to 5-0 (4KOs) with the win, the first in his home state of Florida where he relocated at age 11 from San Juan, Puerto Rico. It comes barely an hour prior to the 18th birthday for the South Florida-based Boricua, who is promoted by Top Rank and managed by Peter Kahn. His placement on the card came with special permission from the Florida State Boxing Commission, waiving its age restriction given the few hours difference along with the show serving as the summer season finale of Boxeo Telemundo.