Antonio Moran paid attention to the recent trend of summertime upsets, avoiding a similar fate through arguably the most complete performance of his career.

The veteran fringe contender from Mexico City was punch-perfect in a 6th round knockout of Guadalajara’s Luis Solis in their Telemundo-televised headliner Friday evening at Osceola Heritage Park in Kissimmee, Florida.

A left hook to the body forced Solis to his knees, spitting out his mouthpiece as he was counted out by referee Telis Assimenios at 1:32 of round six.

Moran’s career has endured its ups and downs, the latter part often coming as he’s stepped up in competition. Still, the 27-year old has almost always offered a credible account of himself, including a narrow points loss to former two-division titlist Jose Pedraza and a hard-fought 10-round draw in a near upset of unbeaten Yomar Alamo in this very venue last October. 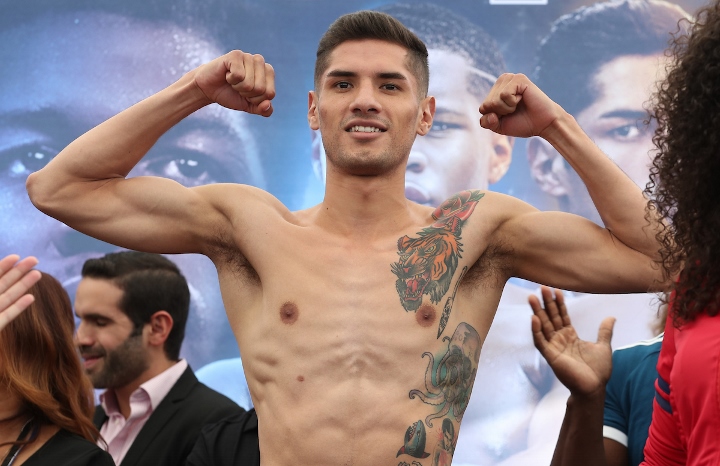 His bout with Solis, however, comes at a time when B-side opponents are thriving in the pandemic. Among the string of upsets witnessed over the past few months came at this site just one week ago when Dennis Contreras sent Colombia’s Belmar Preciado to hell in a stunning 5th round knockout to close out a terrific firefight.

Moran made sure to never afford such an opportunity to Solis, all while seeking his first win on U.S. soil. Among his three losses on this side of the border included a 7th round knockout to Devin Haney last May, with the aforementioned draw to Alamo leaving Moran at 1-2-1 in his previous four starts.

A disciplined approach came of Friday’s showing, with Moran fighting almost exclusively behind his jab. Solis was there to be hit, steadily walking forward as his best—and likely only—chance was to land a home run shot.

That moment would never come, in fact with Moran laying the foundation for such a moment in slowly breaking down Solis.

Moran opened up his attack in round four, advancing beyond a steady jab to stun Solis with a left hook. The sequence was followed with a series of unanswered blows, connecting with right hands and another left hook only for Solis to absorb the shots well in returning fire. Moran avoided the incoming and returned to working behind his jab in forcing his countryman on the defensive.

After boxing his way through a one-sided 5th round, Moran closed the show in round six. The force of Moran’s heavy jab pushed Solis towards the ropes, positioning him for a perfectly placed left hook body shot. Solis went down and never threatened to beat the count.

The win is Moran’s first since a 2nd round stoppage in his Mexico City hometown in December 2018. It also marks his first victory on American soil, coming in his fourth try as he improves to 25-4-1 (17KOs).