That, perhaps more than anything else, is what Yordenis Ugas can gain Sunday night in Los Angeles.

If the Cuban contender beats Abel Ramos, he’ll win the WBA world welterweight title. Manny Pacquiao is the WBA’s real 147-pound champion, but the belt at stake in the Ugas-Ramos match still is valuable for a lower-profile fighter like Ugas.

Elite welterweights consider the 34-year-old Ugas a high-risk, low-reward type of opponent, particularly since he nearly upset Shawn Porter in their title fight nearly a year-and-a-half ago.

The WBA typically doesn’t order its “super” champions to fight its “world” champions, which is one of numerous reasons it’s unlikely Pacquiao would square off against Ugas in one of the Filipino legend’s few remaining bouts before retirement. But Ugas is confident he’ll become a more attractive alternative for other top welterweights by owning a title, albeit one of four championships the WBA recognizes in the 147-pound division.

“Going into that fight [against Porter], I felt I was at that level, the same level of those other fighters,” Ugas told BoxingScene.com through a translator. “Basically, my performance against Porter confirmed it. But, yeah, guys probably dodged me because I’m high risk, low reward. But on Sunday, when I get the belt in my hands, that’ll change, and it’ll force some of these guys to get in the ring with me. I feel some of these guys were dodging me simply because I didn’t have a belt. But now, with a belt, it’ll change that.”

The WBA ordered Ugas, then ranked first in its welterweight ratings, to face the sixth-ranked Ramos early in July, once that sanctioning organization stripped Alexander Besputin of its world 147-pound crown. Besputin (14-0, 9 KOs) defeated fellow Russian Radzhab Butaev (12-1, 9 KOs) by unanimous decision in their 12-rounder November 30 in Monte Carlo to win that belt, but the WBA took that title from Besputin because he tested positive for Ligandrol, a banned substance.

When it ordered Ugas-Ramos, the WBA noted that the winner would have to box Butaev.

“I wasn’t surprised at all,” Ugas said of the WBA ordering him to fight Ramos, not Butaev. “I think it was probably because Butaev isn’t here [in the United States], so maybe logistically, it’s because of the pandemic. Ramos is a warrior. He comes to fight, so I was excited when that fight was ordered.”

The 29-year-old Ramos trailed Bryant Perrella on all three scorecards entering the 10th and final round of his last fight, February 15 at Bridgestone Arena in Nashville, Tennessee. Ramos came back to win by technical knockout thanks largely to the left uppercut that knocked Perrella underneath a bottom rope with 33 seconds to go in their bout. 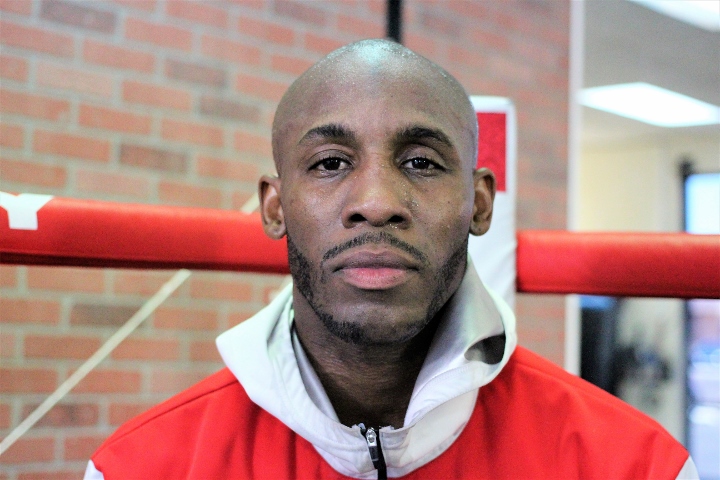 Perrella got up, but Ramos’ right hand knocked him down a second time several seconds later. Perrella reached his feet again, but referee Jack Reiss stopped their fight with one second remaining in it because he didn’t think Perrella was fit to continue.

Ugas gained a lot of respect for his performance against Porter, who won a 12-round split decision in March 2019 at Dignity Health Sports Park in Carson, California. Winning a title, even versus a big underdog, would make all of his sacrifices seem worthwhile for a resilient veteran who overcame multiple imprisonments and poverty in Cuba after arriving in the United States 10 years ago to launch his pro career.

“It would mean the world to me,” Ugas said. “I’ve been on this journey the past 10 years. I’ve won at the amateur level, I’ve won at the Olympic level. When I came into the pros, a lot of people doubted me. They didn’t think I would make it to the championship level, so it means the world to me. I’m ready to embark on this journey and continue my career as a champion.”

Ugas has won 10 of his past 11 fights. His controversial loss to Porter is the only setback he has suffered since losing back-to-back decisions to Emanuel Robles and Amir Imam in junior welterweight fights in 2014.

As much as Ugas wants big fights and substantial paydays during the latter stages of his career, he is currently concentrating on Ramos.

“I’m focused on winning a championship on Sunday,” Ugas said. “Whatever happens after that, I’m ready to fight the best welterweights in the division. I want the other champions, and that includes Pacquiao. I’m open to it. I’m willing to do it. I want to do it. But I’ll rely on my team for my next fight. My main focus is on becoming a champion. Whatever happens after that, happens. I’m ready for whatever.”

Ugas definitely would welcome a rematch with Porter (31-3-1, 17 KOs), though the former IBF/WBC welterweight champion would prefer a rematche against the winner of the Errol Spence Jr.-Danny Garcia fight November 21.

“After Sunday, I’ll have the belt,” Ugas said. “With me being the champion, I’ll give him an opportunity, because Porter doesn’t have a belt right now. I’m willing to fight whoever.”

If no one within Al Haymon’s stacked stable of welterweights wants to fight him early in 2021, Ugas gladly would grant Terence Crawford an opportunity to avenge his amateur defeat to Ugas. Crawford (36-0, 27 KOs) is supposed to defend his WBO welterweight title November 14, perhaps against England’s Kell Brook (39-2, 27 KOs), but he hasn’t secured an opponent.

“I fought him in the amateurs,” Ugas said of facing Crawford at the Pan American Games in 2007. “I beat him 27-10. I’m willing to fight him after my fight on Sunday. It’s up to Crawford if he’s willing to accept the challenge. But I’m ready.”