No matter how many times this fight was going to be rescheduled, Jonathan Oquendo still believed the ordeal to be much better than the alternative.

The 37-year old junior lightweight from Vega Alta, Puerto Rico has twice been forced to break training camp for his off-again, on-again showdown with reigning 130-pound titlist Jamel Herring (21-2, 10KOs). Their bout finally takes place this Saturday, live on ESPN+ (7:30 p.m.ET) from MGM Grand Conference Center in Las Vegas, Nevada, with both boxers fighting for the first time in a 2020 calendar devastated by the coronavirus pandemic.

“Honestly, there was a time when I didn’t expect to fight at all this year, even before this was offered to me,” Oquendo told BoxingScene.com. “When the corona(virus) hit, I though the sport of boxing wasn’t coming back.” 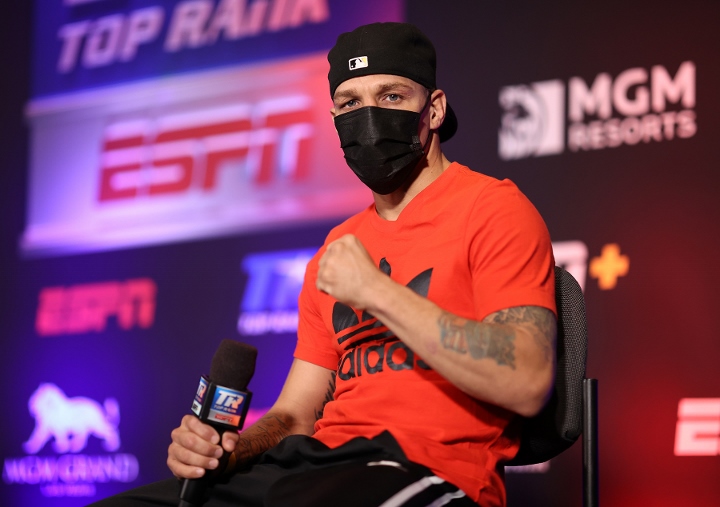 Even in watching two separate July dates—July 2 and July 14—fall through due to Herring testing positive for COVID, faith was never lost. A little bit of frustration, sure, but Oquendo (31-6, 19KOs) never lost sight of the task at hand.

“I feel blessed,” admits Oquendo, who weighed 129.6 pounds for his second career title opportunity. “I feel happy. I haven’t even thought about what comes next when I win the title. All my focus has been on this fight, even as the date kept getting changed. I’ve remained in shape, remained prepared to bring home the title to Puerto Rico.”

Oquendo has been out of the ring since a 10-round win over Charles Huerta last November. The squat Boricua has won five of his last six starts since coming up short in a December 2015 featherweight title bid versus Jesus Cuellar. The lone loss over that stretch was a competitive but clear decision defeat to then-unbeaten Lamont Roach last May.

Roach went on to fight for the very junior welterweight title at stake this weekend, with Herring successfully defending via 12-round decision just days prior to Oquendo’s most recent ring appearance. Better late than never, as far as Oquendo is concerned—both in terms of the delay and at this stage of his 16-year career.

“After this fight, when I win a lot of things will happen for me,” believes Oquendo. “This year has been difficult for a lot of people, especially for a lot of people back home in Puerto Rico. I just keep looking for the positives. I went from not having any fight to being on the verge of becoming junior lightweight champion of the world.”