Herring is expected to face Frampton in his following fight if he overcomes Oquendo in their 12-round fight for Herring’s WBO junior lightweight title at MGM Grand Conference Center in Las Vegas. Cincinnati’s Herring (21-2, 10 KOs) is a 16-1 favorite to defeat Puerto Rico’s Oquendo (31-6, 19 KOs), but Herring is intent to avoid fighting down to the level of the 37-year-old Oquendo. 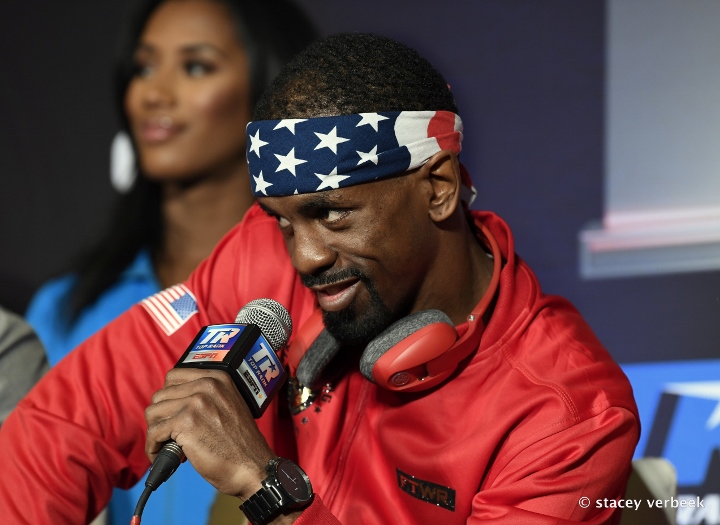 Northern Ireland’s Frampton (28-2, 16 KOs) stopped Scotland’s Darren Traynor (16-4, 7 KOs) in the seventh round of their scheduled 10-rounder August 15 at York Hall in London. Frampton, a former featherweight and junior featherweight champion, could challenge Herring as soon as sometime in November if the 34-year-old southpaw successfully makes his second title defense Saturday night.

“I look at every fight, even the Oquendo fight, as a very big fight because every fight plays a big factor in your career, obviously,” Herring told BoxingScene.com. “Of course, people have been asking about the Frampton fight, and I look forward to the fight. If anything, his last performance, it motivated me to go out there and get my job done, because I feel like us, as fighters, we’re ultimately competitive. So, I feel like my performance basically has to trump his performance. And that’s how I look at things, to keep me motivated and keep a good perspective about the future.

“I can’t look at this fight like Oquendo hasn’t had the best luck or what his record looks like,” Herring said, “because when you start thinking like that, you start fighting down to your opponent’s rate, and you don’t look too great yourself. So, I’ve gotta just expect the best Oquendo and, more importantly, expect the best from myself. I still have to go out there and do a job.

“Me and my team always say this – it’s like you’re expected to win this fight, but in the end, it’s how you look doing it. So, I’ve gotta go out here and still put on a world championship performance, and not just basically slag to the finish line. I still have to go out here, be sharp and prove why I am a world champion.”

ESPN+ will stream Herring-Oquendo as the main event of an eight-bout card that’ll start Saturday at 7:30 p.m. ET/4:30 p.m. PT. Herring-Oquendo has been postponed twice because Herring tested positive for COVID-19.