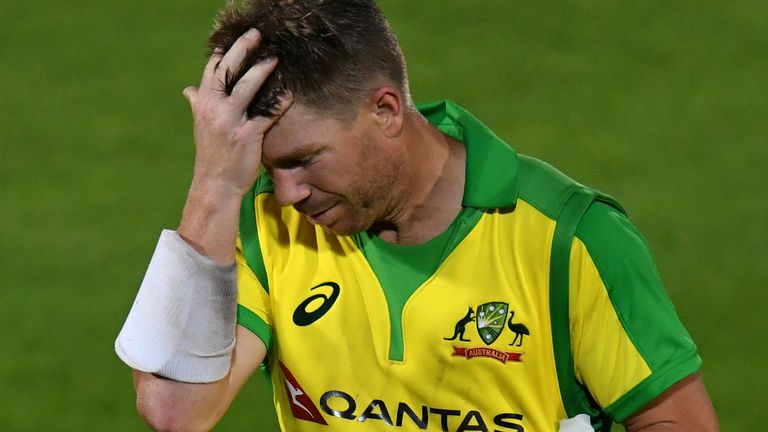 England pulled off a stunning fightback to beat Australia by two runs in the opening T20 international, with the tourists suffering a dramatic late collapse that saw them lose five wickets for 24 runs.

SCORECARD | AS IT HAPPENED

The return of fiery fast men Jofra Archer (2-33) and Mark Wood (1-31) didn’t have the desired effect in the opening powerplay, as England again struggled for early wickets, but Archer came back to dismiss both openers and Wood bowled Alex Carey (1).

Legspinner Adil Rashid (2-29) too pitched in, picking up Steve Smith (18) and Glenn Maxwell (1) in the same over, while Chris Jordan and Tom Curran were superb at the death as England clinched an incredible win.

Dawid Malan earlier struck 66 off 43 balls for England – a seventh T20 fifty (to go with one hundred) from 14 games – and Jos Buttler a quickfire 44 from 29 at the top of the order, but the hosts were pegged back to a below-par score.

Finch had won the toss and elected to field first but, with his bowlers showing early signs of rust, Buttler’s onslaught saw 43 runs reaped from the opening four overs, and 55 from the six-over powerplay.

Jonny Bairstow departed for eight at the end of the fourth, edging a sharp-rising, cross-seam Pat Cummins (1-24) delivery to a deep slip, while the key wicket of Buttler came in the eighth as he picked out the man on the midwicket fence off Ashton Agar (2-32).

That’s when Australia firmly applied the brakes, pace off the ball appearing to do the trick as Agar also accounted for Tom Banton (8) and Maxwell (2-14) added Eoin Morgan (5) and Moeen Ali (2) in three overs of part-time offspin,

Starved of support at the other end, Malan hung around and, after bringing up an impressive 37-ball fifty, he hammered 22 from Adam Zampa’s 18th over to lift England up to a relatively competitive score.

Kane Richardson also impressed (2-13) for Australia, proving incisive with a series of well-disguised slower balls, and it was he who finally accounted for Malan in the death overs.

Australia, in reply, appeared to be cantering to a convincing win as Warner and Finch gave a batting masterclass early on against England’s pacemen.

Even after Finch fell, holing out to mid-off, Smith continued to apply the pressure, striking two boundaries and one glorious, straight six off Moeen in his 11-ball cameo.

The collapse came with the fall of Smith’s wicket, taking Rashid and picking out deep midwicket, while Maxwell foolishly flogged the final ball of Rashid’s four-over spell straight to the field at short extra-cover.

Following the double-strike, Morgan reintroduced his quicks and Archer and Wood repaid their skipper by bowling Warner and Carey, respectively, in their subsequent overs.

Some superb death-bowling by Jordan, as well as the run out of Agar (4), left Curran with 15 to defend in the final over and though Marcus Stoinis (23no off 18) struck one six, he couldn’t follow it up as Australia fell short.

Watch the second T20I between England and Australia live on Sky Sports Cricket and Sky Sports Main Event from 1.30pm on Sunday.