As much as Yordenis Ugas respects Ramos, that’s the Cuban contender’s candid assessment of what happened February 15 in Nashville, Tennessee. Ramos was losing handily to Bryant Perrella on all three scorecards in a fight FOX aired that night, until he unloaded a left uppercut that dumped Perrella underneath the bottom rope with only 33 seconds remaining in the final round.

Perrella reached his feet and tried to fend off his opponent. Ramos’ right hand sent Perrella to the canvas again, though, which led to the conclusion Ugas considers controversial.

Perrella answered referee Jack Reiss’ count for the second time in less than 30 seconds. Reiss disliked Perrella’s physical reaction when Reiss followed protocol by ordering Perrella to walk in a straight line to determine whether he was fit to continue. 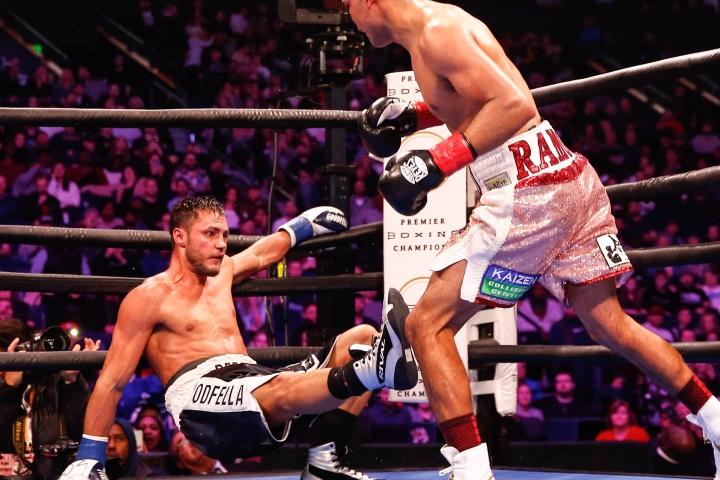 Perrella shakily started to walk, thus Reiss waved an end to the 10-round bout with one second remaining in it. Ramos trailed 88-83, 88-83 and 87-84 entering the 10th round, but his dramatic comeback helped him land a title shot against Ugas on Sunday night at Microsoft Theater in Los Angeles (FOX; 8 p.m. ET; 5 p.m. PT).

“He’s a warrior,” Ugas told BoxingScene.com regarding Ramos. “He’s a strong fighter. I respect him. But he also got lucky in that fight [with Perrella] and got a little benefit from the referee. He was losing every round in that fight, so he got a little bit of luck. I think the referee made the same mistake that he made in my fight, and it’s the same referee. I don’t think that fight should’ve been stopped. Ramos got the benefit of the doubt, and decisions like that, they stain a fighter. They do a lot of damage to a fighter, but I still think Abel Ramos is a warrior.”

Las Vegas’ Ugas (25-4, 12 KOs) and Ramos (26-3-2, 20 KOs), of Casa Grande, Arizona, will fight for the vacant WBA world welterweight title that was stripped from Alexander Besputin.

Russia’s Besputin beat countryman Radzhab Butaev by 12-round unanimous decision to win the then-vacant WBA world 147-pound crown November 30 in Monte Carlo. Besputin tested positive for Ligandrol, a banned substance, though, and the WBA eventually took that title away from him.

The WBA subsequently ordered Ugas, then ranked number one, and the sixth-ranked Ramos to fight for it.

In assessing the unusual circumstances toward the end of Ramos’ victory over Perrella, Ugas referred to Reiss ruling that Shawn Porter slipped to the canvas with 2:05 to go in the 12th round against Ugas in March 2019. Ugas believes his right hand dropped Porter, who edged Ugas by split decision in their 12-round fight for the WBC welterweight title Porter held at that time.

Had the sequence Ugas questioned been scored a knockdown, he likely would’ve won that round, 10-8, on the card of judge Max De Luca, who scored the final round, 10-9, for Porter. De Luca scored the fight 115-113 for Porter, but that 12th-round scoring swing could’ve given Ugas a 114-113 win on De Luca’s card.

“It’s something that’s past me,” Ugas said. “It happened about a year and a half ago. I’ve come back, I’ve won fights. But in the last round, that knockdown on Shawn Porter that was ruled a slip, that should’ve been a knockdown. If that’s ruled a knockdown, I’m WBC champion of the world because of that. So, it’s past me. I just think Jack Reiss made a mistake in stopping [the Ramos-Perrella] fight. But I still respect Abel Ramos and I’m excited for the fight on Sunday.”