Fury is scheduled to face Deontay Wilder in a trilogy fight on a tentative date of December 19.

Should Wilder withdraw from the fight for whatever reason, then Fury dared Joshua to face him on the same date. 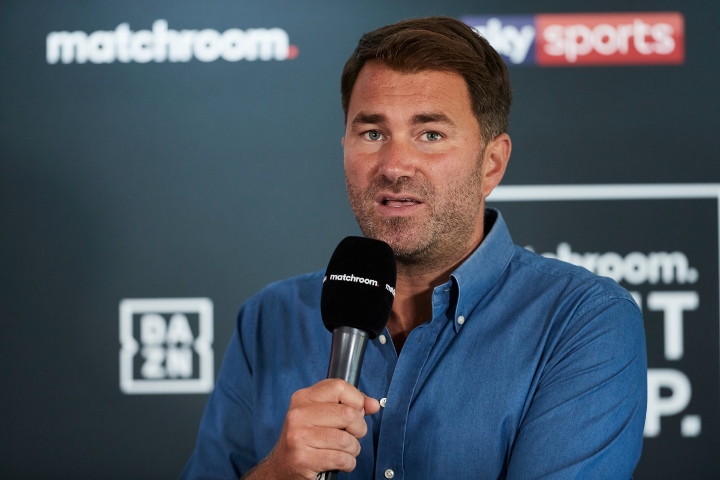 Joshua has a fight also on tap for December, against IBF mandatory challenger Kubrat Pulev.

Hearn is open to that scenario but he doubts Fury can get out of his contracted rematch with Wilder.

And if Wilder actually takes a pass on the Fury trilogy, then Hearn believes the once-beaten boxer should retire.

“But [Fury is] under contract for another fight. No, we’re not under contract yet, but we have to agree to terms with Pulev now. We probably will [fight Pulev]. Fury doesn’t want to get out of his contract for the trilogy match with Wilder. Why would he? Next to a fight with Joshua, it’s the best money Fury can make, and it’s a match that will help increase his popularity in the U.S. We’re probably a lot freer to take the fight in December than [Fury] is. Whether that is to goad us or to challenge us, we accept that challenge to fight in December if you don’t have to fight Deontay Wilder. But you do have to fight Deontay Wilder.

“If Deontay Wilder doesn’t take that rematch, he should retire from boxing. What’s the point? You’ve been a world heavyweight champion, and now you’ve lost and your bum’s gone. You’ve bottled the rematch, and he won’t. He’s got more about him than that. But he’s worryingly quiet, isn’t he? But we don’t have a problem going into the fight now [with Fury]. I just don’t believe one, that the world is geared up for that fight, and two, that [Fury] can get out of the contract [with Wilder] that he’s in. In terms of AJ wanting the Fury fight.”