With Xander Zayas always smiling, always positive, could the COVID-19 pandemic be the one thing to bring a frown to the welterweight prospect’s face?

“When that happened, it gave me a little bit more time to spend with the family, so that was positive not just for me, but for the whole family,” said the 17-year-old, who will kick off his birthday weekend this Friday with a fistfight against Orlando Salgado in Kissimmee, Florida. “We were doing more things as a family and I think that was really, really good and really healthy for us. Even though we were spending time before, after everything closed down, we had even more time to spend together, so it was really good for all of us.”

No, nothing can bring this kid down. So it’s no wonder that with less than a year in the pro ranks, he’s become a young man most want to see succeed. I say most because some folks could see a mix of Sugar Ray Robinson and Muhammad Ali arrive on the scene and say they don’t like his trunks or shoes. But I digress.

The bottom line is that for as well as a prospect fights (and after a stellar amateur career and a 4-0 (3 KOs) start to his pro journey, Zayas can fight), no one becomes a star unless people care. And so far, it seems like they care about this teenager.

“I think everything goes with everything I do on my social media,” he said. “I try to bring a good mentality to the people with motivation and an attitude to stay positive. No matter what is going on with your life, try to smile and put the work in for whatever you’re looking to do. I think that’s the main reason why a lot of people see themselves in me because of all the positive stuff that I post. It’s just amazing all the love that I’ve been receiving the last couple months. I’m happy to have such a great fan base and such great people that follow me and that are going to enjoy this long journey.” 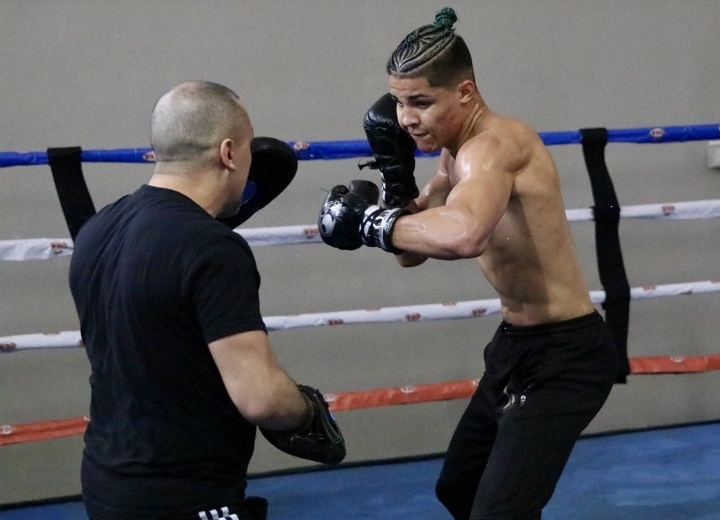 A boxing career that (hopefully) ends up with a world title, big paydays and all that fun stuff is a long journey, so why not enjoy it now in the honeymoon stage, as it’s this sport’s version of spring training, when hope springs eternal. And Zayas is enjoying the ride thus far, especially now that he’s graduated high school and is able to work on his trade full-time.

“It’s an amazing thing because now I can focus on boxing and what I love and do my job as a fighter to be better in the ring every time I step in there for a fight,” he said. “So I just think it’s a really, really great thing that happened and I’m very happy that I finished high school but, at the same time, I’m also happy that now I get to focus on boxing.”

Before graduation and before COVID-19 hit the U.S. with its full force, Zayas was in Puerto Rico, fighting there for the first time as a pro and beating Marklin Bailey in Trujillo Alto.

“It was an amazing experience,” he said. “My first time on my island as a professional fighter and I was really, really happy. I enjoyed the moment, everybody treated me well, there was a lot of love, a lot of support, and I was just happy to be there and perform like I did that night.”

And even though it was only his fourth bout, it was one he won’t forget anytime soon.

“It’s a fight,” he said. “Anywhere I go I gotta step in there and do my job. But I was in Puerto Rico and in front of my people, and they were cheering for me and they were yelling my name, so the energy was a little different. But it’s a fight, and I gotta perform at my best and listen to my corner.”

It will be the same case this Friday against Salgado, albeit without a crowd for the Telemundo-televised bout. Sure it’s in Florida, but Zayas could be on the moon and none of it would matter if he doesn’t exit the ring with the victory.

“I never feel like it’s a home game,” he said. “I always feel like it’s 50-50 because we’re going in there and we put our life at risk. But I’m really, really confident in the work that I put in. It was a great training camp and I’m really happy and really healthy and I’m just waiting for that first bell to sound and to put on a show on Telemundo.”

How eager is he? I ask the soon-to-be 18-year-old, the happiest boxer in the world, how long he’s been waiting to punch somebody in the face?

“Man, I’m ready to go,” Zayas laughs. “What can I tell you? It’s been six long weeks of training camp and I’m ready to put on a show and get the victory. It’s the day before my birthday, so I’m just really, really hyped for this fight coming up.”