IBF, IBO, WBA, WBO heavyweight champion Anthony Joshua explains that he changed everything around after suffering his first career defeat, a seven round stoppage at the hands of Andy Ruiz back in June of 2019.

Joshua was stopped after getting dropped for the fourth time in the bout, which took place at Madison Square Garden in New York City.

The British star would get revenge six months later, when he outboxed Ruiz over twelve rounds to reclaim his four belts.

“I changed everything after that first fight,” said Joshua to GQ Middle East. “Losing to Andy made me rethink and restructure. I took the positives out of it, but it wasn’t easy. My training camp was six weeks of pure hell. I had new team members, I had injuries I was trying to overcome. There were so many different issues. But we got there in the end through will, determination and intelligence.” 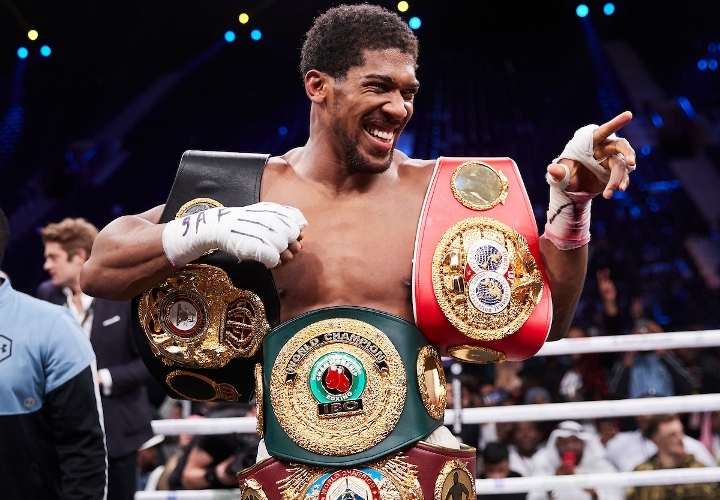 Joshua is slated to make a mandatory defense against Kubrat Pulev, possibly on a date of December 12.

But the real goal for Joshua is to face WBC heavyweight champion Tyson Fury in 2021.

Fury, who faces Deontay Wilder in a trilogy fight on December 19, is also pushing for the high stakes unification next year.

Joshua has a lot of respect for the ability and skill level of Fury, but he doesn’t see anything intimidating about his domestic rival.

“Being world champion, with all those knockouts, you do feel kind of unstoppable. But realistically, in boxing terms, I’m way ahead of where I should be. I’m working at such a quick pace. I shouldn’t even be in a position where I’m mentioned in Tyson Fury’s era. He’s five or six years ahead of me in terms of turning professional. In fact, when he was turning pro, I was just putting on my gloves for the first time,” Joshua said.

“Tyson needs educating. All us athletes do. We often didn’t go far in school, so a lot of our comments and actions aren’t great. But let’s talk about him as a boxer. I don’t find him intimidating and I haven’t seen him do anything in the ring where I think, ‘This guy is going to be a massive threat.’ He’s talented and he’s awkward, and that’s often enough to get you quite far in life.”