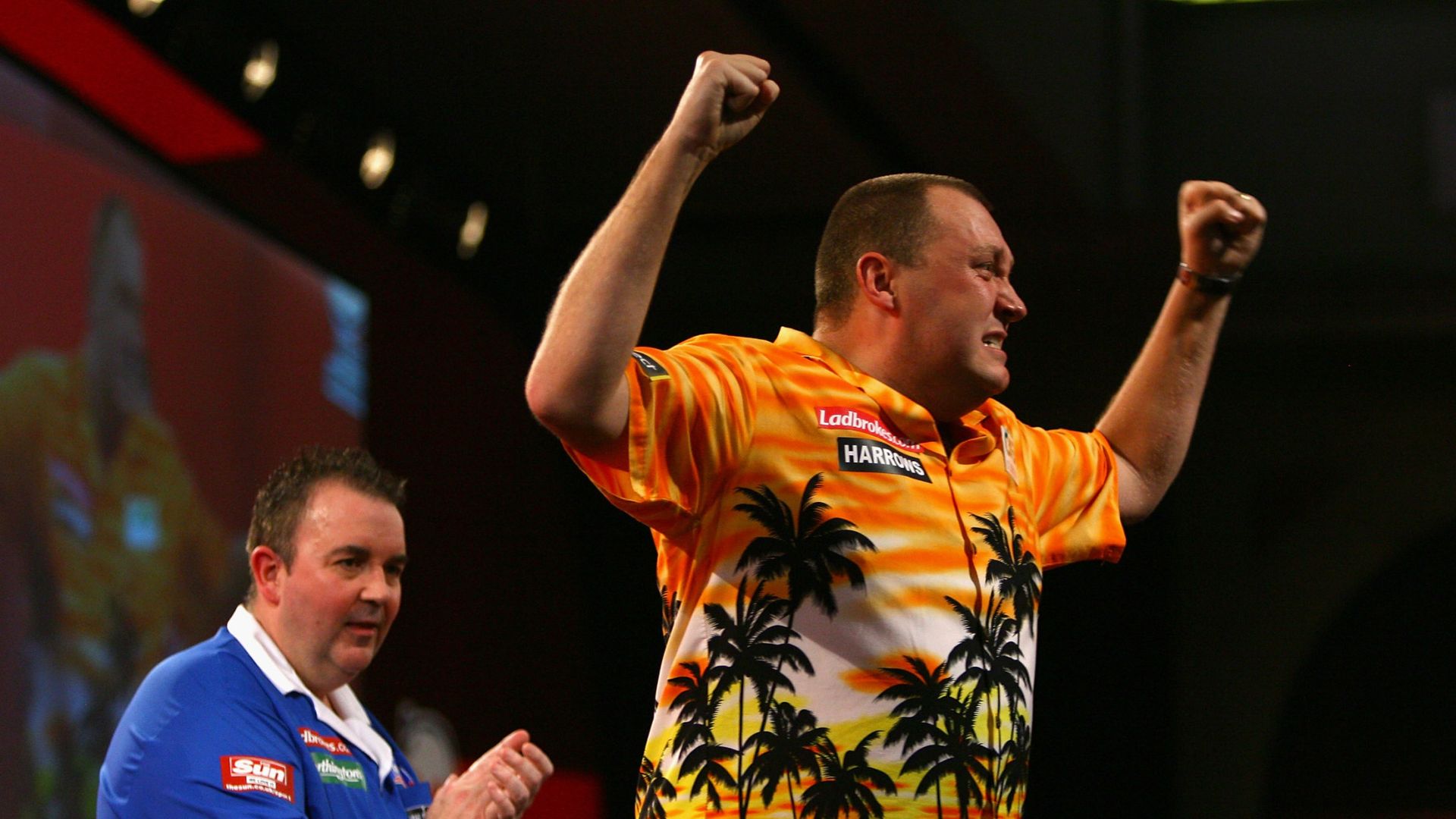 The 2008 World Championship provided euphoria and despair in equal measure for Wayne Mardle, as he speaks candidly to Sky Sports colleague Rod Studd about his semi-final defeat to Kirk Shepherd, in the latest episode of the Sky Sports podcast series ‘The One That Got Away’.

Prior to the PDC’s first venture to the Alexandra Palace, Mardle appeared in four World Championship semi-finals, two of which came against Phil Taylor, and he was still bidding to reach his first final in the sport’s showpiece event.

Mardle renewed his rivalry with ‘The Power’ in the quarter-finals in 2008 and there was a sense of optimism among ‘Hawaii 501’ supporters given Taylor’s vulnerability earlier in the tournament, despite the fact Taylor had won the pair’s previous 13 meetings.

That optimism was vindicated, as Mardle rallied from 3-0 down in sets to triumph in an epic deciding set to secure his first televised victory over Taylor and deny him a place in the PDC World Championship final for the first time in the event’s history.

This was a fun conversation……The question Wayne Mardell gets asked most Is “what on earth happened in that semi final against Kirk shepherd?” Here’s the answer….. https://t.co/CdJ155xflL

Turning off The Power

“Against Phil, I went 3-0 down in sets, playing dreadfully. I had no rhythm, I couldn’t let go of the darts properly. I was absolutely panicking,” Mardle recalled. “It was all going wrong and I was feeling the pressure, but I eventually relaxed and he didn’t like it!

“Bearing in mind Phil Taylor hadn’t been beaten before the final in 14 years, the way he acted afterwards was that of a champion. The first thing he said was: ‘Go and win it now mate’. I still can hear that. It is so vivid.

“When I got home there were three handmade cards that had been put through the letterbox at my house by neighbours, just saying: ‘Well done Wayne, brilliant win. Go on and become world champ’.

“I’m thinking: ‘This is special this.’ It felt like I’d actually achieved something, but of course, nothing was achieved just yet.”

The 21-year-old debutant – a sheet metal worker by trade – was ranked 142nd in the PDC and survived an astonishing 13 match darts in reaching the last four, but he defied the odds once more to inflict arguably the most painful defeat of Mardle’s career.

“I’d never played him but I had watched his games throughout the World Championships and no disrespect to Kirk – he was lucky to be where he was and I was just thinking that: ‘He can’t win’, not with the standard he plays at, he can’t win.

“I just felt that I had every single tool I needed to have. I just felt there was no way he could win this game,” admitted Mardle.

“I had it in my mind to practice with Kirk Shepherd. He would have known I was a better dart player than him. I knew that I was better than him and I wanted to show him before we went on stage.

“During the practice games we had, I annihilated him every single time. Whether it was finishes, highest scores. I was a superior dart player to him, and I wanted to put him down a notch before he walked on that stage.”

Following his win over Taylor, Mardle was the new bookmakers’ favourite to become world champion and the first set certainly followed the script, as ‘Hawaii 501’ raced to the opener without reply.

“I don’t know why, but I feel like I wanted to humiliate him, I wanted to kick him down a peg. All I know is that my mind wasn’t right, I didn’t focus properly and he was a lot better than I actually thought he was as well, and that was an eye-opener.”

Shepherd levelled up proceedings after claiming set two to nil, before recovering from 2-1 down to snatch the third.

Mardle followed up a 140 to leave double one by missing six darts at that target for the set, having earlier gone single 11 and double two when requiring 15. Soon afterwards, the discombobulated darting entertainer found himself 3-1 adrift.

“I’m embarrassed that I was doing those things. I was the professional here – I was the one with it all to lose.

“I get asked questions a lot about this game and I normally say the same thing and that is, maybe I was never ever ready to become a world champion.”

Mardle’s unwavering belief that Shepherd wouldn’t have the composure to close out victory was given credence as he squandered four set darts for a 4-1 advantage and this altered the landscape, as Mardle reeled off three straight sets to lead 4-3, courtesy of a 104 average in the seventh.

The momentum was with Mardle. He possessed far greater big-stage experience, he was the superior player, yet it wasn’t enough, as Shepherd won the final three sets to create history – wrapping up the win with a nerveless 15-darter.

Hindsight is a wonderful thing, but Mardle admits he wishes he could go back and rectify his nonchalant attitude – the way he patted Shepherd on the back after taking out a 170 finish, joking with the crowd throughout and attempting to slow down his opponent.

“Everything you need to be in a world final, I lacked in abundance, apart from ability. You don’t reach five World Championship semi-finals without being good enough. My attitude stunk.”

“I’m a little embarrassed listening to it [his behaviour]. It is not professional, but full credit to Kirk. I do remember him playing some decent stuff at the right times and I would never knock that.”

The narrative that followed was inevitably based around Mardle’s shortcomings, although his average of 92.36 was his highest of the event – usurping his quarter-final triumph over Taylor.

“I didn’t play badly against Kirk. I lost a lot of the bigger moments. What I can vividly recall is: ‘I’ve lost again’. I didn’t think I was ever going to lose, so it was a shock,” admitted Mardle.

“Bearing in mind I hadn’t give him the respect I thought he deserved during the game, I’d played him down, I felt I wanted to put him in his place, for some reason. Kirk’s hand needed to be shook in a respectful way and so did the officials, so I had to pick myself up for that.”

‘It was like the whole world had caved in on me’

Mardle’s affable and enigmatic persona earned him cult status among the darting public, but Studd recalls witnessing his desolation just minutes after that defeat.

“After you left the stage, I was at the Alexandra Palace and as I wandered backstage, you were sat beside this marquee with your head in your hands – motionless, pale, cutting the most desolate of figures, it was quite a haunting image.”

Mardle responded: “I had to walk past my family who were clearly as heartbroken as I was, for me. They were beaten for me and I’ve seen their faces.

“Even now, that can make me well up. Not losing, but seeing my family. You know what I am like Rod. It is family for me and that won’t change.

“The thoughts you can have in milliseconds is quite incredible. It was like the whole world had caved in on me. I’d let myself down, my family down. My actions on stage – this was a World Championship semi-final. Had I learnt nothing?

“Whilst I felt my career wasn’t over, I knew that was an opportunity to reach a world final and at that precise moment, that really stung.” “It made me feel a bit better actually, that a twice world champion, soon to become three-time world champion, felt that I had the game to deal with him. That will live long in the memory.”

By his own admission, Mardle was already dreaming of potentially lifting darts’ holy grail, therefore the prospect of watching the final could have been too painful to bear. Yet Mardle took the brave step of watching it live inside Alexandra Palace.

“Just prior to the final, John Part came to me and actually said: ‘I’m glad I’m playing Kirk and not you. I think you would have had too much energy for me. He didn’t have to say that at all.

“It made me feel a bit better actually, that a twice world champion, soon to become three-time world champion, felt that I had the game to deal with him. That will live long in the memory.”

Sure enough, Mardle’s pre-match predictions were confirmed. He expected a comprehensive win for Part and so it proved, as the wily Canadian closed out an emphatic 7-2 success to lift his third World Championship crown.

The beginning of the end

Mardle’s response in the coming months was admirable. He enjoyed the best Premier League campaign of his career to record a fifth-placed finish, before toppling Raymond van Barneveld en route to reaching the World Matchplay semi-finals.

Nevertheless, he was never afforded another major opportunity at the World Championship that he so desperately craved, making just two more appearances before retirement.

His return to Alexandra Palace following that 2008 heartbreak saw him bow out in round three against mercurial Dutchman Co Stompe, before Jyhan Artut sent him crashing out in the opening round of the 2010 edition.

“Sure enough with the role I played in professional darts, it went wrong again for me and I never got close. I never got close again in a major, let alone the World Championship. It petered out.”

Mardle’s self-effacing nature often betrays the fact he was a top-class operator who performed with aplomb throughout a distinguished career.

As he attested to previously, you do not reach five World Championship semi-finals if you don’t possess the necessary quality, but that feeling of what may have been will surely still linger. For Wayne Mardle, it was certainly the one that got away.