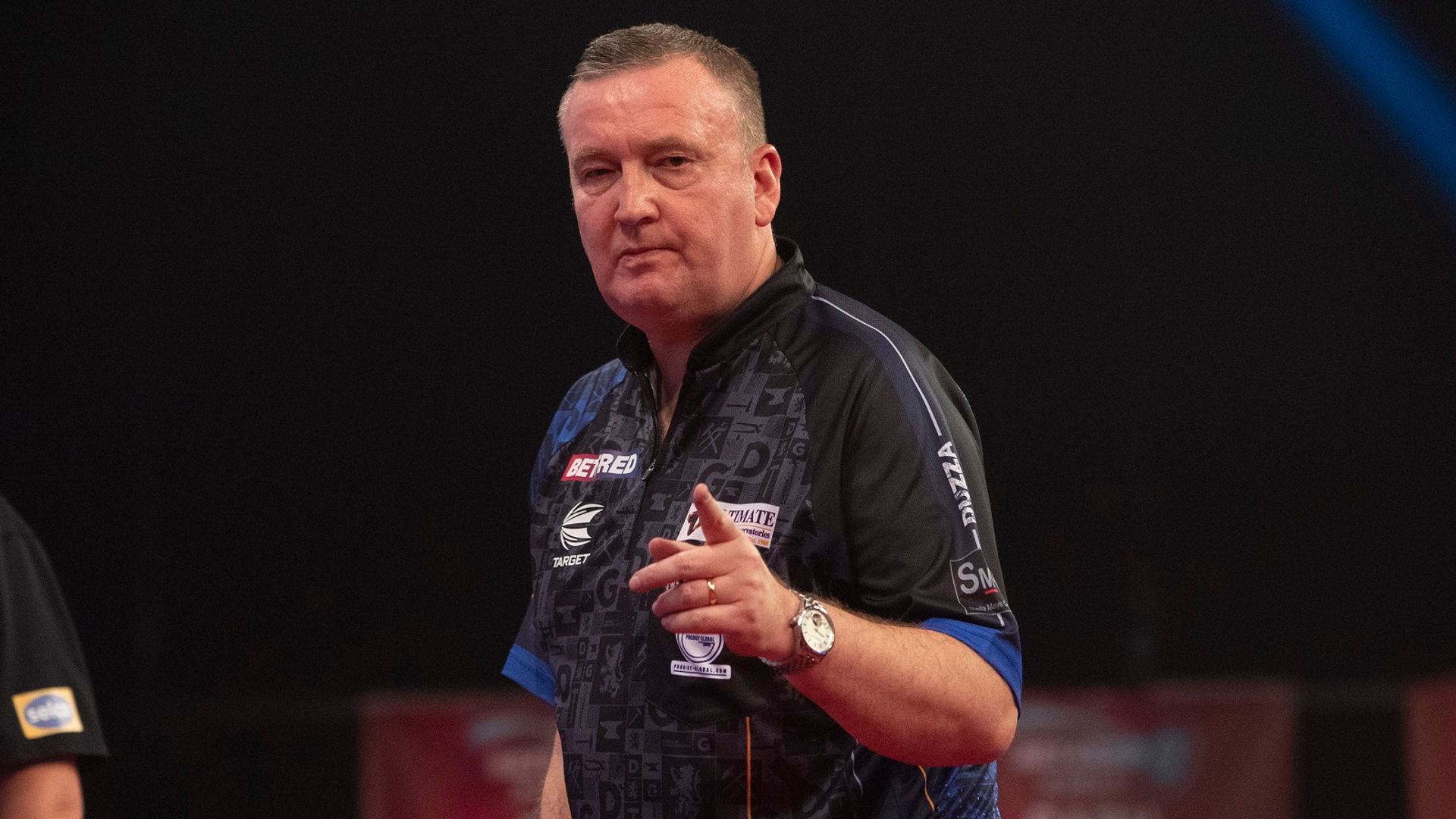 “I believe for the first time in 49 years that I’m up there with the very best in the world now,” says Glen Durrant.

“I genuinely had no idea when I came over from the BDO,” he tells The Darts Show podcast.

“People said I’d had a great season last year, but I didn’t win anything – just a couple of Pro Tours – but you could see I was more consistent.

“Now when you’re in that backroom with them players, when you’ve played 10, 12 [Premier League] games and you’ve lost only once……I’m beginning to believe. And that’s the greatest feeling right now.”

Durrant is top of the Premier League pile, unbeaten in eight matches after taking an impressive 10 points from a possible 12 during the first six nights of Premier League action.

With his place in the Play-Offs likely to be confirmed over the next couple of nights, the targets have very much changed. At a Milton Keynes media day he insisted he would be happy to avoid elimination.

On Wednesday he starts the final four games of the league phase back in the same Marshall Arena, with a four-point advantage at the top of the table and preparing to face Michael Smith.

“When I saw you at the MK for that media day, I did a media day for the Ally Pally a bit before as well, and honestly, I’ll give you a real genuine answer, I was like ‘what am I doing here?’,” he said.

“A lot of them were playing in the Masters. I wasn’t. It was just literally drive down to MK and drive back. ‘What am I doing? What if I end up with nil points?’. That was the kind of mentality. I had so many negative thoughts. And what a flip-coin it’s been. The six days [last week] were tough, the six days were mentally tough.

“Now the target has changed, I said in my interviews last week I’d snap your hands off for fourth place. I am not mathematically through yet, but I am thinking if I finished fourth I’d feel fairly disappointed.

“My target now is 23 points, I think two wins out of four wins me the league and that is the target. Only Michael van Gerwen and Phil Taylor have won the league, that’s the target and what an opportunity to go and win this league.”

It is quite a change from Durrant, who has reached four televised semi-finals in his 18 months with the PDC and is often to be found singing the praises of his opponents more than himself.

But a week in the Milton Keynes bubble, mixing it with the elite of the game, has done more for the 49-year-old than even he imagined. The league phase is usually spread out, but in the space of six nights, he has beaten Van Gerwen, Rob Cross, Gerwyn Price and Daryl Gurney – and drawn with Gary Anderson and Peter Wright.

No-one else managed to go unbeaten across the six nights, and it has changed him. Durrant not only wants to win, but believes he can win. 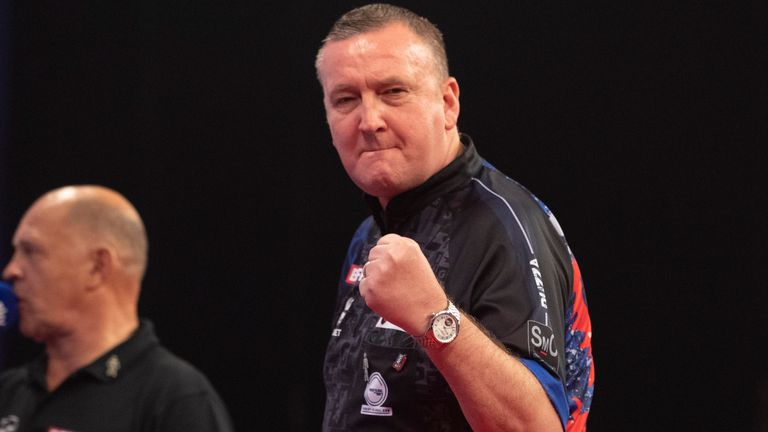 “It’s been an incredible learning curve but why would I just be happy with the semi-final now. On any given night with my mentality I can beat any player in the world and I’ve never believed that or said that.

“But that is what this week has done for me, I can match and beat the best and what a feeling that is to have.”

It has been quite a ride too. ‘Duzza’ had to play ‘Challenger’ Fallon Sherrock on Night Two in Nottingham, and used all his nous and matchplay experience to haul himself level for a share of the spoils.

Against Anderson last week he survived seven missed match darts from the former world champion to earn a draw, and he is causing sleepless nights for one of the game’s greatest.

Van Gerwen called him “boring” – but he would, he has yet to beat him. After two defeats to Duzza over the last couple of years ‘MVG’ ramped things up in the build-up to their match last week.

As he has done with most things, Durrant embraced it, used it and claimed a third victory against the world No 1 to maintain his perfect record against him. He has had criticism from all sorts, it speaks of a man who has got his opponents rattled, but there is a line.

Durrant suffers from Bell’s Palsy, in an unforgiving world it can be used against him.

“Fat, boring, elephant, old man’, I can laugh off. No problem at all. If you look at my social media, I’m the biggest wind-up merchant going. I can take all that. I can come back with another retort, and I’ll end up winning the argument,” he said.

“When the focus comes on the Bell’s palsy, it is a real Achilles heel for me. It can blow my mind but I don’t want to make a huge thing of it.

“If people want to get under my skin, they’ll focus on that side. Because it’s brutal. I hate it. I hate the fact that I can read a million things, but one thing was said by a friend of Gerwyn Price’s, and that’s what he ‘liked’, that’s when I lost the plot.

“Not the fact I was called boring. In fact, my next tweet was about ‘Boring, boring Duzza’. I can handle that. Part of what Gerwyn Price’s apology was, he genuinely didn’t know I suffered with that illness.

“He said, ‘I was raging and just liked a couple of random things’. And I’ll take him on face value for that.

“I just had the best week of my darting life, against elite players, the best players in the world. And my mother was focused on a 10-second spat I had with Gerwyn Price. That was the reason I accepted the apology, moved on, because I want people to focus on my darts.”

Milton Keynes is proving to be a home from home. After a run to the semi-final of the World Matchplay, Duzza is in for another long stay. The players have been given some free time between the two phases, and Durrant headed back to Middlesbrough after more time than he cares to remember on a retail park on the outskirts of the town.

“I know it’s tough, but players have got to adapt. This is a strange [time] that we’re in. But there’s no moans from me that there’s no crowds, you’re stuck in a bubble,” he said.

“The Summer Series was really tough because you couldn’t leave your room, etc. But what are the alternatives? Without MK, it’s at least made it a competitive year for a lot of the players. I really like it down there.

Durrant is succeeding and on his own terms. The big title has yet to arrive but for someone learning at every opportunity you sense it will not be long, especially now he believes he will.