It wasn’t easy but Brian Mendoza checked off two boxes on Saturday night in Downtown Los Angeles. He won what was both his Premier Boxing Champions (PBC) debut and his first fight in a new weight class.

The final scores in his unanimous decision victory over Thomas “Cornflake” LaManna that was televised on FS1 were 96-94 and  98-92 twice. The second two scores seem to be wide in what was a very competitive fight.

“Regarding my performance, there’s a lot to improve on but we definitely noticed big improvements from my last fight and we’re going to continue to keep grinding in the gym and get better each time out. It was my first official fight at 154 and I had more energy so I plan to stay at that weight,” Mendoza told BoxingScene.com. 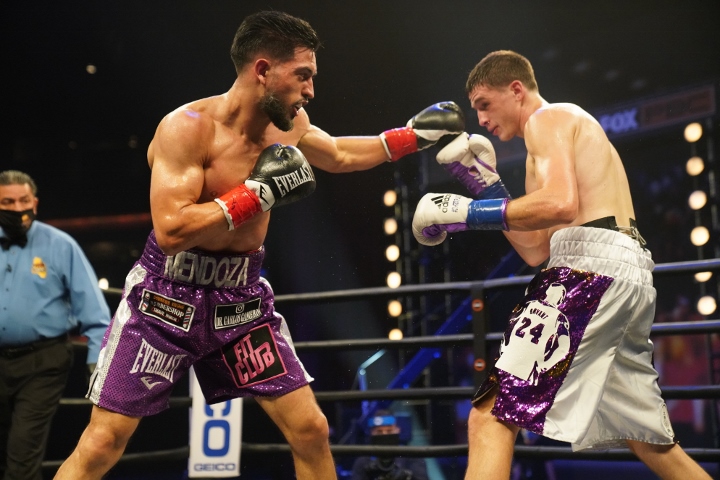 The 26-year-old Mendoza suffered a cut over his left eye in the 4th round that clearly effected his vision for the rest of the 10 round fight. It was the first time that Mendoza has suffered a cut and  he said it will serve as a valuable learning experience moving forward.

“It was bleeding a lot but it was only 5 stitches and I actually like the experience I gained from it. I got clipped and stayed on my feet and got cut for the first time and didn’t let it slow me down and still won the fight!” He explained.

Mendoza is going to take a few days off but plans on getting back in the gym very soon. He doesn’t think the cut will take very long to heal and hopes to get back in the ring very soon.

“I want to be back ASAP!, exclaimed Mendoza. “I’m ready to keep climbing that ladder and earn my shot. PBC has already told me there’s big things coming.”

Mendoza’s previous fight took place last November when he lost a split decision to Larry Gomez in what would be his final fight in the welterweight division. He recently told BoxingScene.com that it was getting increasingly difficult to get down to 147 pounds his past few fights.