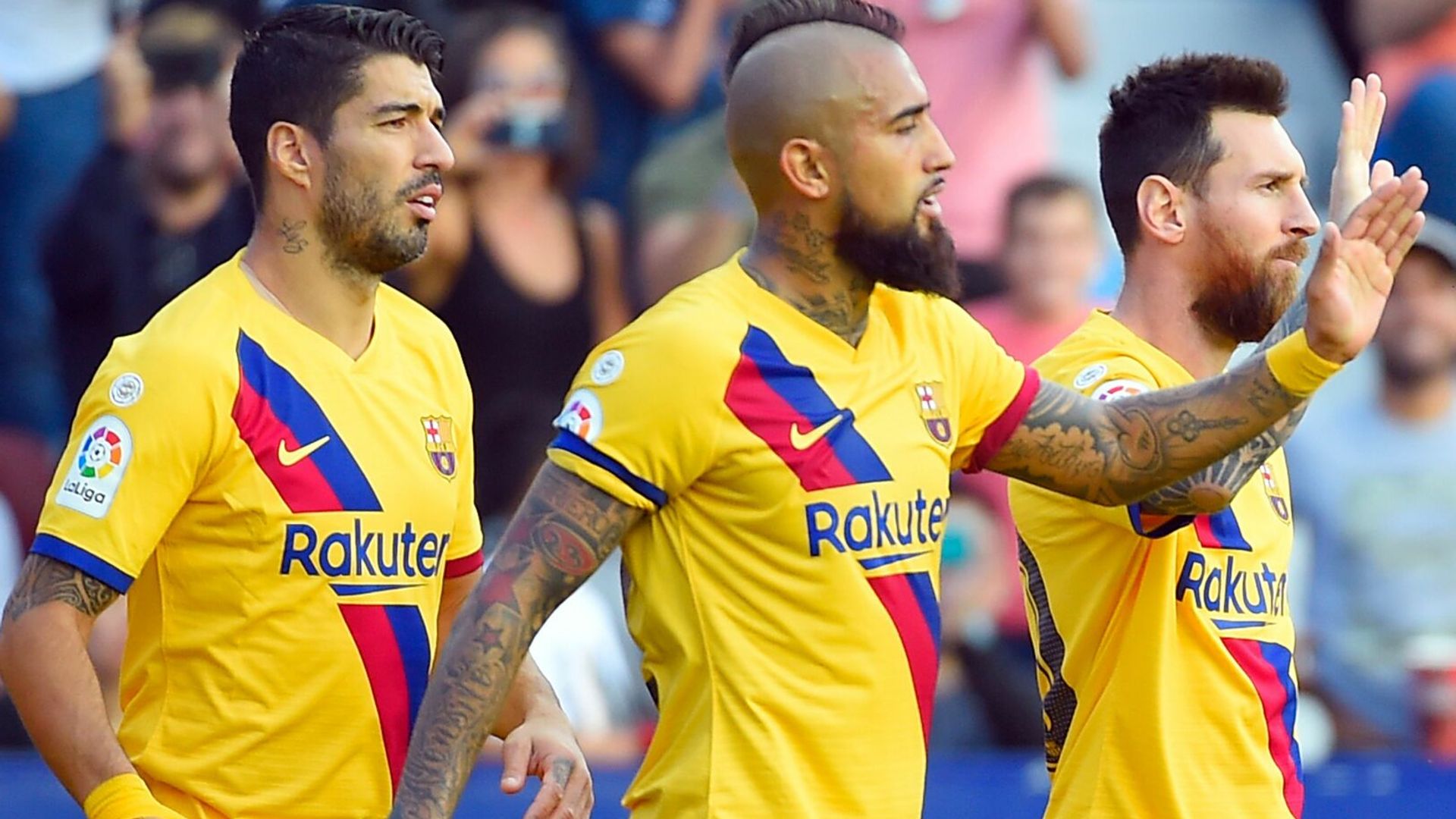 La Liga says Messi’s release clause will have to be paid if he is to leave the club; the 33-year-old’s father expected to meet with senior Barca figures on Wednesday

Lionel Messi’s Barcelona team-mates Luis Suarez and Arturo Vidal are the only players pushing for the forward to stay at the Nou Camp.

Barcelona consider Messi to be on strike and have fined him for failing to report for training on Monday and Tuesday, while the Argentine no longer considers himself a part of Ronald Koeman’s squad.

There has been a deafening silence from most of Koeman’s playing staff regarding Messi’s situation, with the exception of Suarez – whose future at the club remains unclear – and Arturo Vidal, who is in a similar position.

The rest of the Barcelona squad, including those in Messi’s inner circle such as Sergio Busquets and Gerard Pique, have so far kept quiet.

Messi’s father and representative Jorge is expected to meet with the Barcelona hierarchy, including president Josep Maria Bartomeu, on Wednesday to discuss his son’s future.

Messi, who has played for the club for almost 20 years, informed the club last week he wants to leave.

La Liga seems to have dashed his hopes of leaving Barcelona on a free transfer by stating his release clause will have to be paid if he is to leave the Nou Camp.

Sky Sports News has confirmed the 33-year-old has requested a meeting with senior figures at the club to resolve the impasse over his transfer request.

Messi, who has a buyout clause of €700m (£627m), has been tipped to move to Manchester City, where he could link up with his former manager Pep Guardiola.

A move to the Etihad Stadium would also see him link up with international colleagues Sergio Aguero and Nicolas Otamendi, while Paris Saint-Germain and Inter Milan are also said to be preparing offers for the player widely considered to be one of the best footballers of all time.

The 10-time La Liga winner and four-time Champions League victor has asked to activate his release clause that would end his contract, which is due to expire in June 2021, and permit him to leave for free this summer.

But Barcelona have clearly expressed this clause in his contract has already expired.

Messi’s lawyers are arguing that – in the spirit of the deal and good faith – the clause is still active after the rescheduled Champions League final on August 23, which was delayed due to the coronavirus pandemic.

Since making his debut in the 2003/04 campaign, Messi has played 731 games for Barcelona, scoring 634 times in all competitions.

Messi did not turn up for Barcelona training on Monday, with the forward no longer considering himself a part of Ronald Koeman’s squad.

Messi’s father and representative Jorge is expected to meet with the Barcelona hierarchy, including president Josep Maria Bartomeu, on Wednesday to discuss his son’s future.

Sky Sports News has confirmed the 33-year-old has requested a meeting with senior figures at the club to resolve the impasse over his transfer request.

What is the situation with Messi’s buy-out clause?

Messi had, for a while at least, believed he could walk away from Barcelona on a free transfer by exercising a clause in his contract which stipulated he could leave at the end of every season without a single Euro being paid to the club.

However, La Liga has bolstered Barcelona’s stance, with the club insisting the clause has expired and the only way Messi will be allowed to leave is if his €700m release clause is paid in full.

“At every club, you’d be stupid not to be sailing close to the wind if you can generate the revenue, then you’ve got to maximise what you can spend. FFP is there to hold clubs like City back, which must be frustrating when they’ve got one of the richest owners in the world, and he just cannot spend the money he would like to on the football club. I understand his pain, because other clubs have been able to do that for 20, 30, 40 years.

“City do have assets. Raheem Sterling’s a great example, they bought him for £50m, he must be worth £100m now – he’s already said he might be interested in a move to Real Madrid. If at some point in the future, they have to sell someone like Raheem Sterling to finance the club going forward, they might do that.

“Every year their academy makes them anything from £10m to £40m in player sales, and we don’t hear much about it because they’re 18-19-year-old kids. That is a profit-making enterprise. They’re very smart on that front and they maximise their income there.

“For every one of them, they’ve got a Phil Foden. What would he be worth in today’s market? Even now, about £100m probably.

“They’ve got things in their favour, and from their point of view, they’ll have the best legal and financial minds looking at this. If Juventus, a club who earn let’s say £100m a year less than Manchester City, can afford a deal for Cristiano Ronaldo, then City in the richest league in the world can definitely afford, one way or another, a deal to sign Lionel Messi.”

How well would Messi cope in the PL?

Can Messi really do it on a cold Tuesday night in Stoke? Or in Manchester for that matter? It is the perennial question that we may finally get the chance to answer.

The legendary forward would no doubt add an extra touch of class to the Premier League but at 33, what can we realistically expect of Messi?