Whether you’re a fan or a cynic when it comes to the outspoken Houston twins, you’ll no doubt get a chance to revel in one viewpoint or the other on Sept. 26.

The belted duo will headline their first pay-per-view show when they compete in the first and second “main events” of a six-bout card to be televised live from the Mohegan Sun in Connecticut.

The older and heavier of the pair – by one minute and six pounds, respectively – Jermall Charlo will defend his WBC middleweight belt against No. 1 challenger Sergey Derevyanchenko in what’ll be the 34-year-old Ukrainian’s third title try in his last four fights over 23 months.

Derevyanchenko won his first 12 fights as a pro, then dropped a split decision to Daniel Jacobs for the vacant IBF crown in October 2018. He defeated Jack Culcay over 12 rounds six months later, then came out on the losing end of a narrow, but unanimous verdict against Gennady Golovkin last October.

Both the losses were in main events at Madison Square Garden.

Jacobs dropped the belt to Canelo Alvarez in his next fight, and Derevyanchenko’s match with Golovkin was for the same strap – along with the IBO title – after Alvarez vacated to move to light heavyweight.

And though the results were disappointing, he insisted they’ll help against Charlo.

Confidence is rarely a concern for the elder Charlo, who won a belt and defended three times at 154 pounds before rising to 160. He was elevated to full-fledged WBC titleholder in June 2019 after the organization deemed Alvarez worthy of its ridiculous “franchise” championship.

Two fights since have resulted in two impressive wins, though the opposition – Brandon Adams and Dennis Hogan – wasn’t exactly top of the line. Adams was ranked 15th in the division by the Independent World Boxing Rankings at the time of the fight, while Hogan was four slots down at 19th.

And anxious, it seems, to prove a point to anyone still uncertain about him.

“I’m going to be super sharp. That’s the message I want to deliver to all of the other middleweights out there,” Charlo said. “I thought I might need to out-perform Jacobs and Golovkin, but as long as I continue to be myself, I will get the victory and I’ll have my hand raised. I’m smart, stronger and better than I used to be. … Everybody is doubting me. I’ve been doubted for years. It’s not anger. I don’t care what my opponent or his trainer says about me. I’m a fighter and I’m ready for this.” 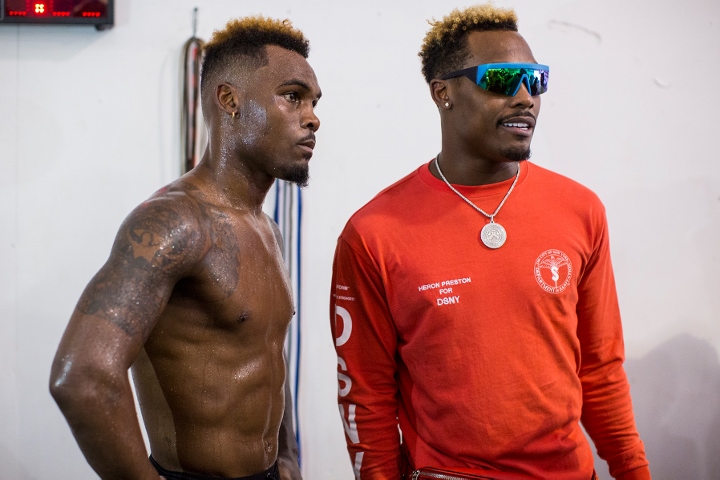 Meanwhile, one rung down the weight class ladder, little brother Jermell has a mission, too.

The younger Charlo wants to not only kick off his second reign as WBC champion at 154 – after losing, then regaining his belt against Tony Harrison – but to add a couple more trinkets when he faces reigning IBF/WBA champion Jeison Rosario in a three-belt unification contest.

Charlo won and defended his belt three times before the surprising decision loss to Harrison three days before Christmas in 2018, then avenged the defeat with an 11th-round KO exactly 364 days later.

Rosario, on the other hand, was an anonymous one-loss challenger when he shocked dual-belt champ Julian Williams with a fifth-round TKO before Williams’ home crowd in Philadelphia in January.

Williams was a 30-to-1 betting favorite entering that fight, so it’s no concern to Rosario that Charlo will be significantly favored against him as well.

“He is the best in the division, and I wanna go ahead and prove that I am truly the best at 154,” Rosario said in a Premier Boxing Champions interview. “Right now, the only thing on my mind is Jermell Charlo. And that is a major motivating factor for me, knowing that that (fight) is potentially in front of me.”

WBA “world” welterweight title – Los Angeles, California
Yordenis Ugas (No. 1 WBA/No. 8 IWBR) vs. Abel Ramos (No. 6 WBA/No. 31 IWBR)
Why it’s garbage: Ahh, yes… the WBA. Where having a “super” champion (Manny Pacquiao) and a “gold” champion (Vergil Ortiz) in a weight class is apparently not enough to sate the desire for even more sanctioning fee revenue. Ugas is a nice fighter and this is an OK matchup. But come on, when is enough actually enough? Don’t call it a “secondary” or a “minor” title. Call it what it is… a disgrace.