In the way of comparison performances, there is a theory that the bar has been set exceedingly high for Jermall Charlo to match or surpass.

The unbeaten two-division titlist offers his own viewpoint on why he heads down the road he’s chosen to travel.

“Everybody doubt me,” Houston’s Charlo bluntly stated during a virtual press conference on Monday to promote his middleweight title defense versus former two-time title challenger Sergiy Derevyanchenko. “They’ve doubted me for years.” 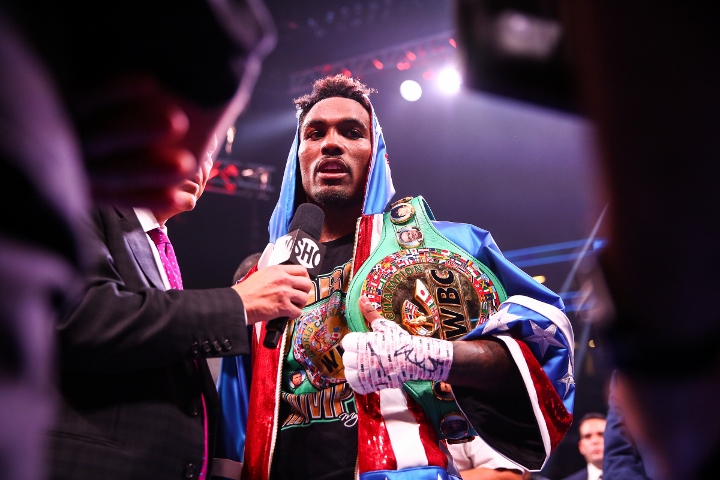 Charlo puts his belt on the line against an experienced challenger in Derevyanchenko (13-2, 10KOs), who remains best known for his losses but fighting tooth-and-nail in coming up just short on both occasions. The Brooklyn-based middleweight from Ukraine dropped narrow decisions to Daniel Jacobs and Gennadiy Golovkin in title fights just 49 weeks apart on Madison Square Garden grounds in New York City.

Many viewers felt Derevyanchenko deserved the nod over Golovkin (40-1-1, 35KOs) in their Fight of the Year-level war last October, the last time he has stepped foot in the ring.

Charlo (30-0, 22KOs) has remained perfect in title runs spanning two weight divisions. However, his junior middleweight reign was far more celebrated than the level of competition he’s been forced to settle for since moving up to the 160-pound division.

Even the start of his official title reign came on compromised terms, receiving an upgrade from WBC “Interim” to “World” titlist only after the sanctioning body designated Saul ‘Canelo’ Alvarez its “Franchise” champion. It wasn’t the way Charlo wanted to claim the belt, much rather facing Alvarez in the ring for it.

The third defense of that title represents by far the stiffest challenge of Charlo’s run at the weight. It came by design, as Derevyanchenko—while the current number-one contender—was never the designated mandatory challenger. Charlo was once linked to a potential clash with second-generation contender Chris Eubank Jr. but instead settled on the no-nonsense Ukrainian boxer.

Even though not his main motivation, it can prove to be the simplest way to prove his worth even if by comparison.

“I’m no Danny Jacobs. Andre is sitting right there probably trying to compare that fight because he worked with Danny Jacobs for that fight. I’m no Triple-G. It’s a whole different type of fight. We both having to [train and] fight during this pandemic. The cops, they need retraining. We’re fighting against racism, brutality and everything.

I’ve been at home training. He thinks Sergiy has been going crazy training. I’m home training crazy, too. I’m at the top of my game. I‘m not worried about what they saying about my level of competition. They saying this is a step-up fight. Well, styles make matchups.”

One thing that Charlo has vowed to not attempt, is to intentionally try to outdo his predecessors. That part, he promises, will just come naturally.