Herring made that same trip from Omaha, where he trains, early in July, only to leave town without actually opposing Oquendo. The WBO junior lightweight champion learned he tested positive again for COVID-19 the day he was supposed to weigh in for a bout that was scheduled for July 14.

That caused the second postponement of Herring-Oquendo in less than three weeks because Herring failed a coronavirus test. It was postponed the first time, from July 2 to July 14, on June 23.

“I’m just grateful to get back in the ring,” Herring told BoxingScene.com. “Hopefully, the third time’s a charm.” 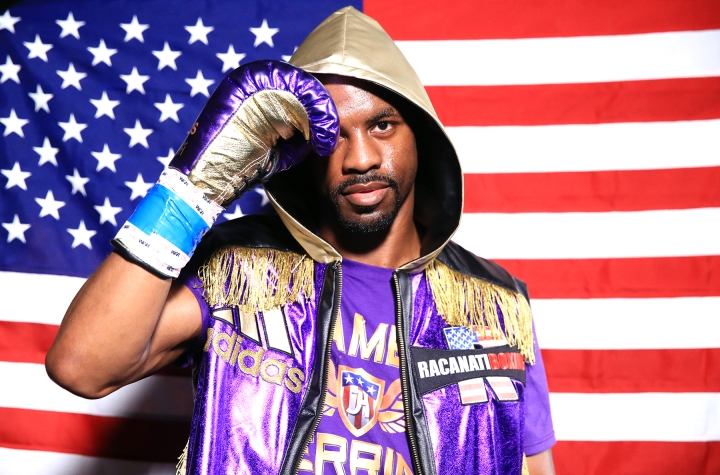 “I just got tested a few days ago, and my results came back negative,” Herring said. “With that being said, I’m in a positive mindset, that we won’t have any setbacks or any issues before I enter ‘The Bubble.’ But overall, I just continued to take care of myself and stayed out of harm’s way. I’m still wearing a mask when I go out in public places, like the store. If anything, I made less trips and if I didn’t have to go anywhere, I stayed indoors, where it was safe, and I just stayed to myself.”

Herring has learned a lot about COVID-19 throughout his two-month ordeal. More than anything, Herring, a Marine who served two tours of duty in Iraq, has come to expect the unexpected.

“My last time around,” Herring recalled, “when I tested positive in ‘The Bubble,’ the very same day I got the call, which was the same day as the weigh-in, I went to get the antibody test. And the antibody test basically proved I had the antibody to fight the virus. Then, the next day, which would’ve been fight night, I took another test in Las Vegas for the coronavirus, and that came back negative. So, sometimes it can be frustrating.

Herring is confident he’ll pass his remaining COVID-19 tests in Las Vegas in part because middleweight contender Rob Brant and others that Herring trained alongside in Omaha didn’t have any issues in “The Bubble” recently.

“Sometimes the cells are still shedding,” Herring explained, “and you still have traces of the virus, even though you can’t spread it. … It’s crazy, but I’m just hoping that I don’t have the bad luck of another test popping up positive.”