Heavyweight up-and-comer Filip Hrgovic has been idle since December due to the coronavirus pandemic and is not only anxious to get back into the ring but also of the strong belief that he can compete with even the best in the division right now.

Hrgovic will get his wish to return to action this fall but he understands that it will still take at least a few more wins for him to achieve a high enough ranking in the sanctioning bodies for it to be worth while for bigger names to face him.

“I feel ready to fight anyone in the world right now but, of course, I will need a few more fights to get into position to fight for the world title and the biggest names like Tyson Fury, Anthony Joshua or Deontay Wilder,” Hrgovic told BoxingScene in a recent phone interview from his home in Zagreb, Croatia. “But if you ask me I am ready right now. I spar with great champions, I had a great amateur career and I feel ready right now.”

Hrgovic will return to the ring on September 26th against Ondrej Pala (33-5, 23 KOs) at the Struer Energi Park in Denmark.

Should all go well in that fight, Hrgovic, who is co-promoted by Team Sauerland and Matchroom Boxing, is supposed to be back in action on Matchroom Boxing promoter Eddie Hearn’s next DAZN card in the United States. It is penciled in for either Oct. 3 or Oct. 24 – site to be determined – and could be headlined by lightweight world titlist Devin Haney, whose team is close to a deal for him to defend against former unified featherweight titlist Yuriorkis Gamboa. 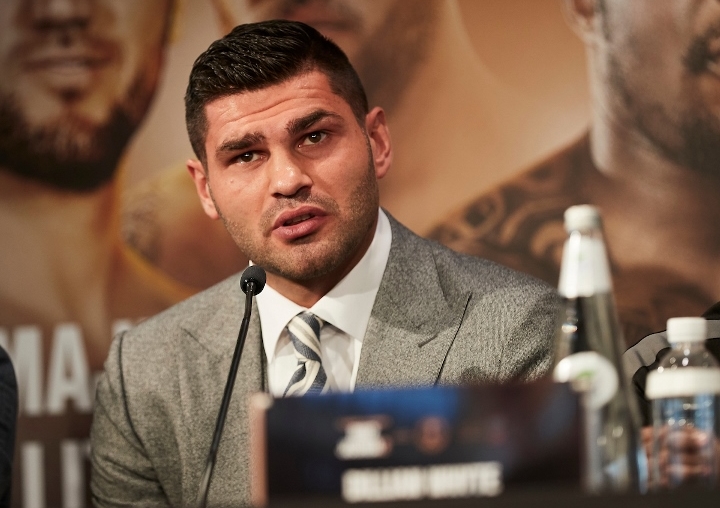 According to Team Sauerland, a deal is in place for Hrgovic (10-0, 8 KOs), 28, to fight Rydell Booker (26-3, 13 KOs), 39, of Detroit, an experienced veteran who went the 10-round distance in a decision loss to contender Kubrat Pulev in his last fight in November.

Hrgovic said he has trained throughout the coronavirus pandemic and doesn’t much care who he faces this fall for what will be his first fight since blasting out former world title challenger Eric Molina in the third round in December in Diriyah, Saudi Arabia, on the undercard of the heavyweight title rematch between Anthony Joshua and Andy Ruiz.

“Whoever it will be it doesn’t matter. I will be ready for everyone,” Hrgovic said. “During all this quarantine time I was training very hard and I didn’t have time off. So, I am in very good shape. I did a lot of physical stuff with no fight and now I start my official training.”

Although he has only 10 professional fights, Hrgovic believes he can compete with anyone in the division because of his vast background as one of the top amateurs of his time. He had a long amateur career that culminated with a bronze medal for Croatia in the 2016 Rio Olympics. His run came to an end with a semifinal loss to eventual gold medalist Tony Yoka, whom he went 1-2 against in the amateurs.

Hrgovic also was involved in the semi-pro World Series of Boxing from 2010 to 2015. He had 30 fights, going 26-4 against many of the top amateurs in the world. It is that deep experience that has allowed his handlers to move him quickly.

“I like that I am moving fast but I can’t wait to get into a real fight,” Hrgovic said. “You still haven’t seen what Filip Hrgovic can do, and I am looking forward to the biggest names and biggest tests because I am the best when I have a dangerous opponent.

“I had 30 fights in the World Series of Boxing. I had more than 100 amateur fights. So, I feel mature and I am feeling good. I think I can compete with anyone, with all the big names and the best in the division. I feel ready to box with them right now with only 10 (professional) fights. I had lot of tough fights in the WSB. I was just a kid. I was 18 years old when I started there. It was a very good test for me at that stage of my career. It was very good preparation for professionals.”

Hrgovic also gained significant experience by sparring with some of the division’s elite, including now-retired former heavyweight champion Wladimir Klitschko and retired former titlist David Haye as well as former titleholder Wilder, Pulev and Daniel Dubois. It was Hrgovic who cut Haye in 2013 in his final sparring session before Haye was scheduled to fight Fury, forcing the bout to be postponed and ultimately canceled.

Hrgovic is one of Croatia’s most well known athletes, drawling big crowds and TV ratings on free-to-air RTL for his two pro fights there, bouts with Johnson and Mansour in 2018.

“In Croatia, I’m popular but my goal, of course, is to become international,” Hrgovic said, adding that he is excited to have his second fight in the U.S. in October.

“America has the biggest boxing tradition and for me it’s special to box there,” said Hrgovic, whose U.S. debut was a first-round knockout of Corbin in May 2019 on the Haney-Antonio Moran undercard in Oxon Hill, Maryland. “I hope I will box more often there and I will introduce myself to the American audience.”

In the meantime, Hrgovic said he will continue to work toward his goal of facing top contenders and eventually fighting for a world title.

He said he knew he was on his way when he was given a spot on the Joshua-Ruiz II card.

“It was great thing for me. It was a great job from my promoters and manager,” Hrgovic said. “It was an honor for me to fight there because there are so many prospects in the world and stars and they gave me the opportunity. I come from a small country of 4 million people. So to fight on the event like that it is was a real miracle when you see where I come from.

“We don’t have a big boxing tradition in my small country. If I was from Great Britain or the United States or Mexico I would already be superstar. But it is what it is. I did it the hard way. I know who I beat. I know how I spar with the best in the world. I know what I can do.”