Beterbiev and Deines were slated to fight on Sept. 25 in Ekaterinburg, Russia, the Montreal-based Beterbiev’s native country. However, plans are in the works to shift the fight to Oct. 23 to a venue to be determined in Moscow with both fights to air in the United States on an ESPN platform to be determined.

Arum had hoped to have Vlasov-Salamov take place in the United States but because of travel issues related to the coronavirus pandemic, Top Rank’s Russian partners on the two fights will instead put them on the same card in Russia, Arum said. 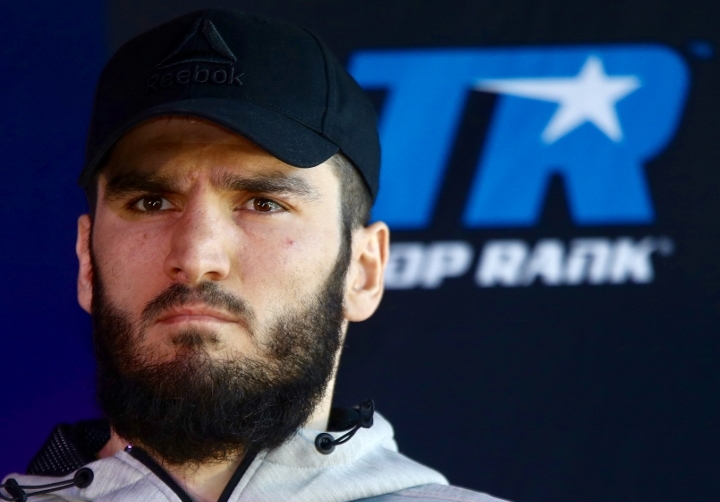 Beterbiev was initially scheduled to fight mandatory challenger Meng Fanlong (16-0, 10 KOs), of China. But Meng, has been training in the United States, was unable to get a proper visa, causing the recent change opponent to Deines.

Beterbiev-Meng was originally scheduled to take place on March 28 in Montreal but postponed due to the coronavirus pandemic and now it is off. It remains to be seen if Meng will keep his mandatory position with the IBF.

Beterbiev (15-0, 15 KOs), 35, will be making his fourth title defense when he meets Deines and fighting for the first time since knocking out Oleksandr Gvozdyk in the 10th round to unify two belts in October and sending Gvozdyk into retirement. Beterbiev will also be fighting in Russia, which he represented twice in the Olympics, for the first time as a professional. All of his bouts have taken place either in Canada or the U.S.

Deines (19-1-1, 10 KOs), 29, a Russia native fighting out of Germany, suffered his only loss by unanimous decision to Meng in a title elimination bout in June 2019, but he has won two in a row since. He has been idle since last September.

As for Vlasov and Salamov, both of whom are with Top Rank, the winner is supposed to take on Joe Smith Jr. for the vacant WBO 1750-pound world title that was vacated by Canelo Alvarez. The WBO ordered a four-man tournament to fill the vacancy.

In the first semifinal, Smith (26-3, 21 KOs), 30, from New York’s Long Island, scored a spectacular ninth-round knockout of former world titlist Eleider “Storm” Alvarez (25-2, 13 KOs) on Aug. 22 on a Top Rank card inside “the bubble” of the conference center at the MGM Grand in Las Vegas to earn his second shot at a world title.

Vlasov (45-3, 26 KOs), 33, of Russia, has won three fights in a row since a one-fight move up to the cruiserweight division, where he lost a unanimous decision in an interim world title bout to Krzysztof Glowacki in November 2018.

Salamov (25-1, 19 KOs), 26, who is based in Las Vegas and trained by Kevin Barry, has won six fights in a row, five by knockout, since dropping a 10-round decision to Australia’s Damien Hooper on the Manny Pacquiao-Jeff Horn undercard in July 2017 in Brisbane, Australia.

In his most recent fight, Salamov knocked out Emmanuel Danso in the third round in his hometown of Grozny, Russia.