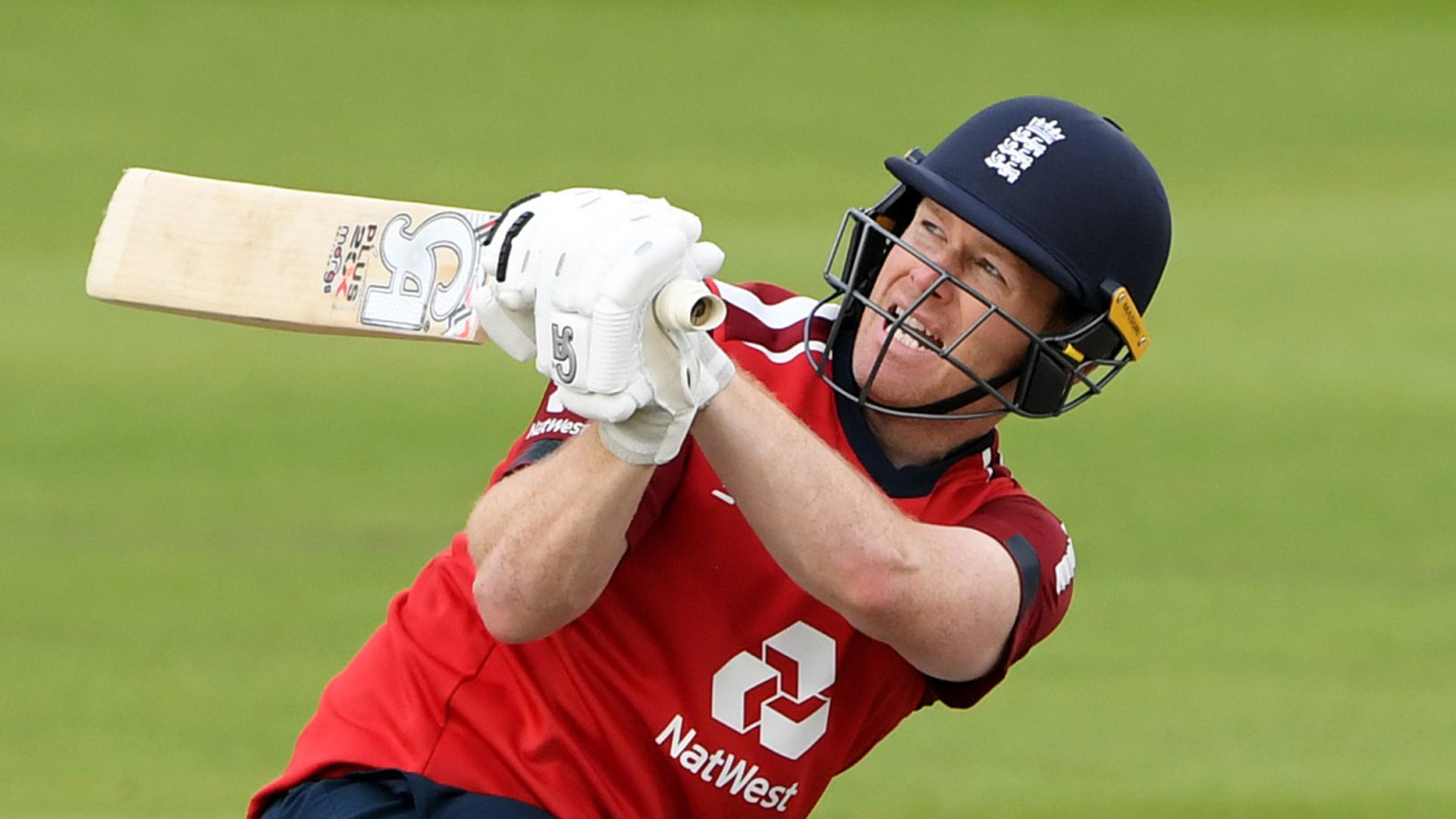 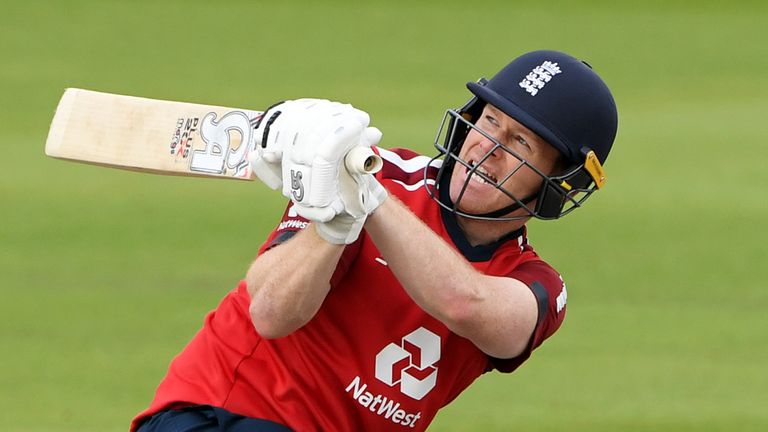 Eoin Morgan smashed 66 from 33 deliveries to lead England’s victory charge as they chased down 196 to beat Pakistan by five wickets in the second T20 international at Emirates Old Trafford.

Jonny Bairstow (44 off 24 balls) and Tom Banton (20 off 16) got England’s chase off to a blistering start before the innings was rocked as they fell to consecutive Shadab Khan (3-34) deliveries in the seventh over.

Morgan survived the hat-trick ball but was fortunate not to be given out lbw to the next, before going on to strike six fours and four maximums in a century stand with Dawid Malan (54no off 36).

The England skipper couldn’t quite see his side over the line himself, holing out to deep square-leg off Haris Rauf (2-35), but Malan’s sixth T20I fifty in only his 12th game got the hosts home with five balls to spare.

England take a 1-0 series lead into the third and final T20I between the teams, back at Old Trafford on Tuesday – live on Sky Sports Cricket from 5.30pm.

England, having won the toss, were wayward with the ball first up, with Babar Azam (56 off 44) and Fakhar Zaman (36 off 22) sharing in an opening stand of 72, before the latter fell to a faster, flatter Adil Rashid (2-32) that he slog-swept down Banton’s throat at long-on.

Babar – the No 1 ranked batsman in the world in T20 cricket – raced through to a 37-ball fifty, while 39-year-old veteran Mohammad Hafeez (69 off 36) joined him and upped the tempo even further, carting Saqib Mahmood (0-38) over deep-square-leg for the first of four sixes.

Rashid returned to pick up Babar’s wicket, holing out to Sam Billings at deep midwicket, seeing 38-year-old Shoaib Malik join his old mate Hafeez at the crease – the pair having opened the batting when Pakistan debuted in the T20I format 14 years ago.

Hafeez and Shoaib rolled back the years, firing a further 50 runs in just 24 balls – one Tom Curran over reaped for 23 runs – and Hafeez, the main aggressor, brought up a 12th T20I half century.

Shoaib’s undoing came in the 17th over, plinking a Chris Jordan (1-41) yorker to short extra cover, while Curran (1-46) picked up Hafeez with the penultimate ball of the innings.

Bairstow got the England reply up and running with back-to-back boundaries in the second over, while Banton struck an audacious six off Imad Wasim in the third – a reverse-paddle finding the stands backward of point.

Pakistan were further troubled by seemingly a hamstring injury to Mohammad Amir (0-25) that limited him to only two overs, but Shadab provided what had looked briefly to be the match-winning turn.

England, and Banton in particular, had targeted the legspinner to great effect in Friday’s rain-abandoned first T20I, but Shadab had his revenge as Bairstow first top-edged a sweep to short leg and Banton was trapped in front lbw.

Shadab thought he had a third victim in four balls when leading another strong shout for lbw against Morgan and though the delivery was shown to be hitting the stumps on review, the England skipper survived as it was ‘umpire’s call’ on impact and so stayed with the ‘not out’ decision on field.

Morgan and Malan made the most of the reprieve, compiling a massive 112-run partnership for the third wicket off only 62 balls and though Morgan, Moeen Ali (1) and Sam Billings (10) all fell late on, England made comfortable work of a sizeable run-chase in the end.

Watch the third and final T20 international between England and Pakistan, live on Sky Sports Cricket from 5.30pm on Tuesday.