Sunny Edwards took his unbeaten record to 15, as he boxed on the backfoot throughout to record a wide, unanimous points decision over Thomas Essomba in a super-flyweight 12-rounder at the BT Sport Studio in London

It was a fight of few highlights. Edwards was too quick, too smooth, although he lacks power and will not have many short nights during his career. He set a pace that Essomba couldn’t match and concentrated on just outboxing his opponent and rarely mixed it.

Marcus McDonnell scored it 116-122, Phil Edwards had it 117-12 and Terry O’Connor had it 117-111. Michael Alexander refereed. It was for Edwards’s IBF international title. 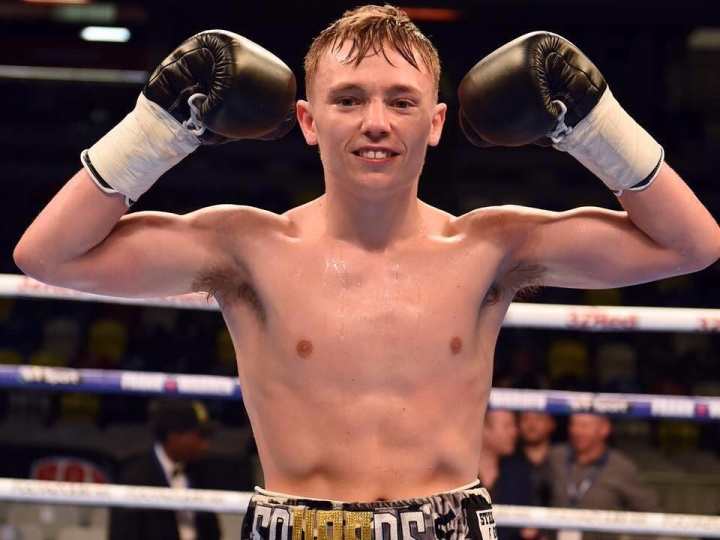 Essomba, a Cameroonian who is based in the Midlands, came into the fight off a couple of good wins, having ended the unbeaten records of Sean McGoldrick (in Liverpool) and Iskander Kharsen (in Khazakhstan).

Edwards, the brother of former WBC flyweight champion, Charlie, boxed safety-first in the main, using his jab and feet well, while Essomba tried to get close to make a fight of it. Edwards switched stances, danced around and poked and prodded at Essomba,

As the fight moved on, the Cameroon fighter got more and more desperate, diving in from further and further away, while, in the ninth round, he frustratedly hit Edwards on the break.

The main worry came for Edwards when he seemed to roll his ankle, although he seemed to shrug it off and it didn’t impede his movement. Essomba never stopped trying, but he never had much success. By the end, Edwards got on his bike and just stayed out of range.

“I think maybe you could give him two [rounds], but even then, every time I landed I made sure I was finishing off with that jab,” Edwards said. “He was a very tough lad. He was a two-time Olympian, I volunteered at the Olympics he boxed Paddy Barnes in. I was there sat front row, so I have known about Thomas Essomba since I was 15-16. It was a pleasure to be sharing a ring with someone like that.

“Really I am a flyweight. I am boxing at super-flyweight for the opportunities. I want world titles and I want them at flyweight, because really Thomas Essomba was a boiled-down bantamweight, he was massive in there compared to me. I am happy with that – 15 and 0, O can’t really complain.”

Highly promising Scottish light-heavyweight Willy Hutchinson made short work of the overmatched Ben Thomas, as he won in only 129 seconds of a fight that was somehow scheduled for ten rounds

Thomas had taken the fight on only nine days’ notice, but he was not in Hutchinson’s class. A right over the top, followed by a body shot saw him score a knockdown a minute in. Thomas was soon under bombardment again and, as he tried to tried to evade a right hand, he was dropped again by a right uppercut, referee Michael Alexander waving it off as he fell.

“It was my first fight in about five months, I’m happy everything went to plan,” Hutchinson said.